Salty beer? Single-origin light roast pilsners? This beer and cider festival will expand your palate, and your mind. 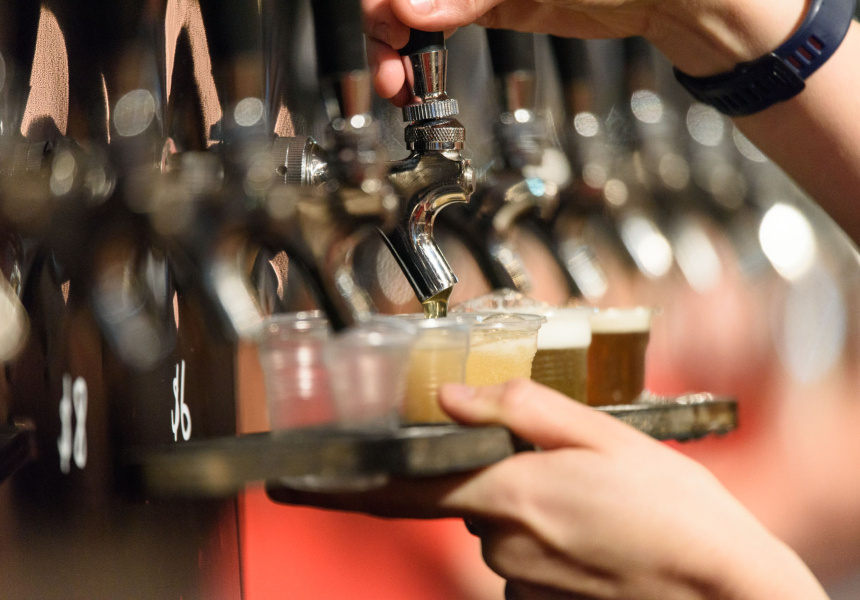 If there is one word to describe the GABS Beer, Cider and Food Festival, it’s probably “ambitious”.

Since the first event in 2011, the Great Australasian Beer SpecTAPular (as it was known then) has grown out of its original venue at the Local Taphouse in Melbourne's St Kilda, and now takes place across three different cities: in Melbourne at The Royal Exhibition Building; in Sydney at The Dome at Showground Olympic Park; and in Auckland at the ASB Showgrounds.

GABS features more than 170 international and local beer and ciders brewed specifically for the event, plus hundreds more at individual brewery stands. This year it’s even added a virtual reality tour of Chicago brewery Goose Island.

The event is famous not only for its ambition, but for giving drinkers an insight into the cutting edge of beermaking – trends that may not make it to your local pub.

We spoke to festival co-founder Guy Greenstone about some of the most interesting and surprising trends to look for at this year’s festival.

Salt in beer has been on the rise in recent years. Greenstone likens the pairing of salt and beer to the idea of salted caramel or salted desserts. It does an excellent job of balancing out sweetness or sourness in beer, he explains. At GABS this year, nine breweries having brewed festival-only beers that feature salt. The salt additions are as varied as the beers themselves, and come in the form of pretzels, salted-caramel cookies, Murray River seawater, applewood cold-smoked salt, and even a salty sea urchin from New Zealand called Kina – all added right into the beer.

Greenstone is a big fan of the new “juicy” or hazy style of India Pale Ale. Often referred to as New England IPAs, they emphasise fruit flavours and have a low bitterness when compared to other IPAs. “I think it’s a really good stepping stone from a pale ale up to a more hop-driven beer without being super bitter,” he says.

These beers have taken off in the USA in the last 12 months and we are seeing more and more brewed in Australia. The sometimes-murky appearance generates debate among beer fans, but with 11 beers in this style at GABS this year (up from zero last year), perhaps it may take off here too.

Sour beer acidity and tartness makes it a great match for food. Sours have already made their way into the Australian beer market, but Greenstone calls them “polarising” (though says the addition of fruit or fruit syrup may lead to appeal in the summer months). The range of techniques and resulting flavours in sour beer, he says, can go from complex barnyard and “horse blanket” flavours (a term used to describe beers that contain Brettanomyces, a certain wild yeast strain with a specific aroma and flavour) to gentle yogurt-like fruit flavours.

With almost 20 sour beer and ciders at GABS this year, it’s the perfect chance to try one for yourself.

Traditionally coffee in beer has been limited to dark beers with dark roast coffee. Now, with festivals such as On The Bend/On The Mend and events such as Beerspresso, brewers are exploring the gentler side of coffee. Rather than blending coffee with malty stouts and porters, more brewers are blending single-origin light roasts with pilsners, or acidic sour beer, to emphasise the fruit characters.

“It seems to be a really great fit and there are a lot of different ways you can do it,” Greenstone says. “You can use coffee in a way that doesn’t necessarily add a heap to the bitterness but can actually add a lot of character.”

Fruit and beer make fine friends and this year’s GABS sees it used in all sorts of ways, from wine-beer blends, to rhubarb and apple cider. The biggest surprise for Greenstone, though, is the number of mango beers. With five on the list, up from zero last year, he isn’t sure what led to the rise but suspects after years of brewers using citrus fruits, mango is a logical progression. He also says fruit flavours complement and amplify flavours such as orange, apricot and lemon, which are often found in hoppier or sour beers.

GABS Beer, Cider and Food Festival runs in Sydney at The Dome at Sydney Showground Olympic Park on Saturday May 27.