Each fortnight a 60-kilogram Berkshire pig is delivered. Every part of the beast is used, from the head (which becomes terrine) to the belly (bacon sangers for staff meals). When Broadsheet calls Nicholas Hill, the situation in the kitchen at newly minted French bistro Porcine is approaching code red.

“A broken dishwasher and a chef off sick had us a tad behind today,” says Hill.

Even with a former Old Fitz head chef (Hill) in the kitchen and an ex-Don Peppino’s co-owner and chef (Harry Levy) running the show, opening a restaurant is not for the faint of heart – especially when you throw a whole pig into the mix every fortnight.

Hill and Levy have been on the tools for two months now, transforming the former Micky’s Cafe on Oxford Street into a French bistro, where the pair’s impressive careers have culminated in intoxicating food and atmosphere .

For Hill, who won accolades with his Gallic-influenced pub food at Woolloomooloo’s Old Fitzroy Hotel, Porcine marks a return to the polished techniques he forged at fine diners including Sepia and London’s Michelin-starred Ledbury. For Levy (also ex-Bar Brosé and Love, Tilly Devine), it’s a return to a strip reinvigorated over the past several years by players including Fred’s and Saint Peter, as well as his now-closed Italian diner Don Peppino’s.

“Oxford Street is a vibe,” Hill says, laughing. “There’s plenty of life in her yet.”

The vibe at Porcine is all about good times with mates while enjoying great food and wine – which makes sense not only because it’s above the newly opened Paddington outpost of P&V Wine & Liquor Merchants, but because Hill and his front-of-house manager Matt Fitzgerald have been best mates for decades.

“After the Fitz closed and Harry had finished up at Don’s, it felt right to have a proper crack at it,” says Hill of the collaboration. “Harry has great experience in fields that I don’t, and [the] Micky’s [space] came up with the P&V guys. Matt has been my best mate for over 20 years, and his knowledge and experience came late to the piece but fit like a glove. It all just really seemed to work.”

As for the food, let’s talk about that aforementioned pig. Each fortnight a whole Berkshire pig arrives from Hungerford Meat. Each 60-kilogram carcass is aged for up to three weeks to improve flavour and texture before it’s broken down into house ham from the legs; cretons (a French-Canadian pork spread) and chou farci (pork-stuffed cabbage) from the neck and shoulder; 600-gram tomahawks from the ribs; as well as T-bones and rump chops.

“The head is pressed into a terrine and sold in the P&V courtyard by the slice, and the bellies are cured and smoked for staff bacon sangers on Sunday mornings,” says Hill. But vegetarians are also taken care of: there’s a dish of seasonal vegetables in a bay-leaf vinaigrette, a Jerusalem artichoke vol-au-vent with garlic hollandaise, and a salad of endive in grilled orange vinegar.

His top picks when we talk include a Québécois-style pate of spiced pork mince and chicken livers enriched with crème fraîche and pork fat. He describes the menu as “French bistro the way we like it: simple and homely.”

And the fact that you can BYO wine from the P&V bottle shop right downstairs is a game changer.

“For diners to be able to buy from the bottle shop to drink upstairs is a huge win and a fun way to dine,” says Hill.

It’s part of a “very organic” approach to interior design that includes leftovers from Micky’s – a cosy fireplace, a balcony, red-velvet curtains, and a neon sign reading “Cocktails & Dreams”.

“Paint was decided over a wine and a laugh, and there was lots of foraging in op-shops and on [Facebook] Marketplace,” says Hill.

“We refine in certain areas and leave other parts alone,” says Hill. “It feels like a Lyonnaise bouchon some nights and a bit more bougie Parisian on others.” 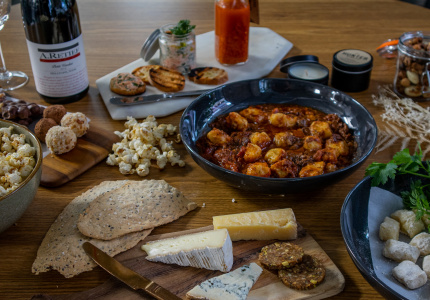