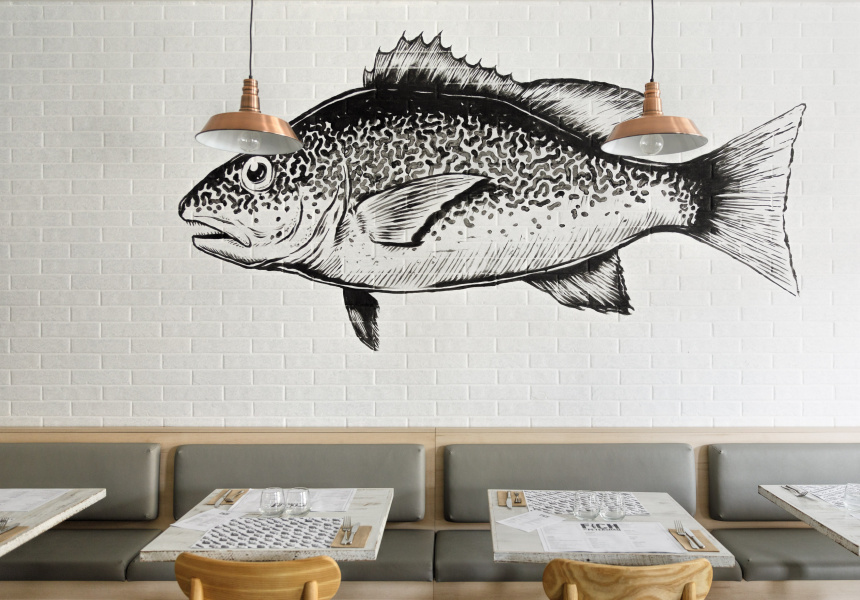 Fish and chips have long been devoured in a modest setting, piled atop greasy newspaper with a mound of dim sims, and enjoyed on the sand, while fighting off seagulls.

When Josh Niland decided to raise the bar at the recently opened Fish Butchery in Paddington, not everyone was thrilled. Niland says it has been “met at times with condemnation” because many customers can’t get their head around fish being an expensive product. Few dishes have the same nostalgic clout and some customers are “chippy” to see it change.

Niland’s take on the childhood snack comes amid a fresh wave of modern fish-and-chipperies in Sydney, which are seeing kitchens use fresh whole fish, and in some cases, swapping out newspaper and plastic cutlery for silver service.

“Fish and chips is the most difficult dish we do at the restaurant (Saint Peter) and Fish Butchery,” Niland tells Broadsheet. The cost of fish has shot up over time; the recipe demands a complex, meticulous preparation process; and there is a nostalgic emotional factor attached to the dish itself. All these factors have changed the way chippies have been operating to make quality fish and chips.

Here are some new joints that serve fancy fish and chips, from an upscale fishmonger to a sustainability-focused seafood fine diner.

Headed by two ex-Bennelong chefs (Jose Silva and Manny Paraiso) this modern chippy marries the concept of a takeaway tuck shop with an upscale seafood restaurant. Fish and chips sit beside more unusual dishes – like a panko-crumbed stingray schnitzel. The ling used in the fish and chips is sourced sustainably from New Zealand; and the beer batter is made with Bright Eye pilsner from Marrickville’s Grifter, giving the deep-fried fillet a light and crispy texture.

This sustainable, upmarket fishmonger carries lesser-known, under-fished species and serves up wildly imaginative seafood. The crumbed marlin “schnitzel” sandwich has caused quite a stir – it sells out seconds after appearing on the chalkboard. Owner Josh Niland likes to use whatever he can get his hands on for the fish and chips. Sometimes it’s a mirror dory, other times a rock flathead or pink ling. But the batter remains consistent. It’s a rich mix of vodka, beer, honey, flour and rice flour; and the dressing is a yoghurt tartare, which is a more refreshing take on the traditional mayonnaise dip.

Despite its misleading name, Cod’s Gift does not actually serve cod fillet in its fish and chips. The upscale seafood restaurant uses a more expensive (and environmentally friendly) grade of fish, like a flathead or a silver dory, and tops plates with hand-cut chips, lemon, herb tartare and a dollop of mushy peas. Punters can sit down for a fine-dining experience in the lavish-looking venue, decked out in plush velvet couches and marble tops; or grab their meal on-the-go from the quaint, old-fashioned takeaway window to the side of the diner.

When Jesse McTavish (ex-head chef of Melbourne’s Top Paddock and The Kettle Black) took over North Bondi Fish’s kitchen, he gave the menu a major makeover. But he kept the fish and chips number from being knocked off the board. The Australian classic involves a golden beer-battered flathead (which is sustainably caught) – loaded with chips, lemon and tartare sauce.