The Foodish Boy charts one man’s attempt to launch a culinary career through weekly food jobs across five continents. Uninspired by his day job behind a desk and obsessed by all things culinary, Alex Nazaruk was after a role in the food industry that could also satisfy his travel itch. “My immediate thought was to visit kitchens around the world,” he says. That idea was the beginnings of The Foodish Boy, a project that entails travelling around the world for an entire year while working in a different food job every week. “I was daring to dream, ‘is this possible?’ It was a nice story and gave me something to work towards.” He’s now 27 weeks in, having spent the last two weeks working in Sydney, with plans to head straight to Melbourne next.

Hailing from the UK, Nazaruk kicked off working at a craft brewery in northern England. He followed that with immersing himself in modern Nordic cuisine at a Reykjavik restaurant, cooking hot dogs in Brooklyn and dishing up meals aboard the Orient Express to Machu Picchu. “Never go out drinking with chefs the night before a flight,” he warns, having missed his scheduled trip to New York thanks to the hospitality of his Icelandic kitchen team.

With no kitchen experience under his belt before launching himself into restaurant work, it was a tough gig starting out. Nazaruk has budgeted to be able to get through the year without being paid, as to preserve the experience as being the most important aspect of the trip, rather than making ends meet. Though payment has varied from place to place, and other locations provided accommodation and food in exchange for him time in the kitchen.

“In Mexico in September last year, the project really started taking off,” says Nazaruk, where he spent time working at the celebrated Pujol restaurant – it’s number 17 on San Pellegrino’s The World’s 50 Best Restaurants list. “That just blew my mind. They have one dish that incorporates a mole sauce, which has 32 ingredients that they age for 150 days, like a sourdough. They have one guy who just does that.”

From there, the doors to the world of fine dining were opened with further stints over a couple of months in Lima, Rio de Janeiro and Buenos Aires. “I didn’t have a single job lined up after Mexico,” he says. No matter, as the international kitchen team came forth with a series of referrals around South America. Twitter has also been a great source of contact for Nazaruk, but having a recommendation or referral from a previous employer has always been the aim.

“I always try to find a restaurant that represents the country I’ll be in, with something going on there that’s important in food at the moment,” Nazaruk says of his most recent stopover in Sydney. Starting off at Colin Fassnidge’s Four In Hand was an opportunity to delve into nose-to-tail cooking, while the following week at Quay was a lesson in texture, colour and the celebration of nature. Heading to Sydney was always on the agenda, but it was a blog claiming Peter Gilmore’s food was the best in Australia that pushed Nazaruk to apply there. “Looking through his book, it was stunning and beautiful. His dishes are so vibrant and alive.” Melbourne is next on the list, where he’ll be working with specialty coffee roasters and cafe Market Lane.

Heading down under was a welcome reprieve from foreign kitchens. “There’s only so much you can gather when everyone’s speaking Icelandic or Portuguese. Here I can pick up more on the kitchen dynamics between staff,” says Nazaruk, explaining his intention to gain experience across the full spectrum of the food industry from farming right through to haute cuisine. That meant pruning at a coffee plantation in Brazil, bottling tequila at a Mexican distillery, and catching up with Tim Johnstone – Quay’s Hawkesbury-based organic and heirloom produce supplier – amid wasabi juicing duties.

For Nazaruk, blogging about his adventures on the road has proved to be just as important as the work itself. “Restaurants get reviews, but it’s a team effort,” he says. “A lot of places have found it refreshing to have someone writing about the other people in the kitchen who make the food possible, featuring everyone from the pot washer to the head chef.”

Overlooking the harbour on the balcony of Quay, Nazaruk says Sydney has an atmosphere of innovation, open to new ideas and cuisines. “Sydney is an incredibly multicultural city. To have chefs from different cultures and backgrounds working together really inspires the creative process,” he says, noting stories of Peter Gilmore’s lessons about the texture of sauces from the Cantonese, seasonality from the Japanese, and technique from the French. “Australian chefs can take the best aspects of many different cultures and fuse them to create exciting and inspiring dishes. And you can’t beat this restaurant for a setting.” 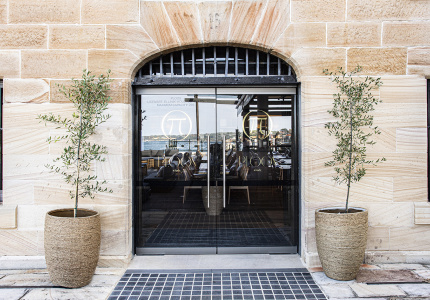