The food at this year’s biggest art fair will be on par with the art. Art and food have been two long-standing passions for restaurateur Sam Christie. His success with restaurants Longrain, Shortgrain and Subcontinental are testament to the hospitality side, so now it’s time for the art.

Returning to Sydney Contemporary Art Fair after his debut there in 2013, Christie is drawing inspiration from Subcontinental to create a stand-alone pop-up restaurant for visitors and gallerists. He is creating dishes specifically for the fair.

“The idea is to get everyone involved in art on a massive scale,” he says.

This year the event offers a diverse range of art from Australasia. The works themselves come from 90 galleries across 13 countries.

The warming Asian food, inspired by local and seasonal produce, will exhibit Australasian culture as well as the art does during the five-day festival. Some noteworthy dishes include Murray Valley pork in a Sri Lankan black curry, and a traditional laksa. The pop-up restaurant will also serve Australian oysters.

Also there in their own area will be Young Henrys; Mary's, with burgers and fried chicken; Newtown favourite Bloodwood; Food Rascal with barbecue and fudge brownies, 5 Senses coffee by 212 Blu cafe; and everyone’s favourite, Gelato Messina, will create a flavour exclusive to Sydney Contemporary.

Come for the art, but we’re willing to bet you’ll stay for the food.

Sydney Contemporary is on at Carriageworks from September 10–13. 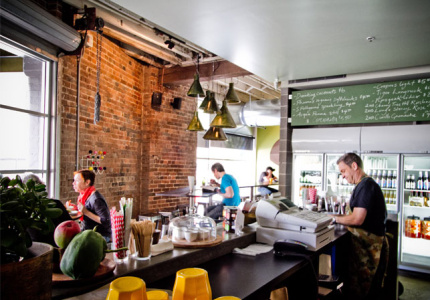