Five to Try: Sydney’s Best Burgers of the Moment

A chilli-chicken number you’ll dream of, a grass-fed double cheeseburger with triple-cooked hot chips, and a patty encrusted with caramelised speck. These are the ‘burgs – old and new – we’re crossing town for right now. How good are burgers. (No question mark needed, it’s not a question.) As a general rule, it’s hard to find a bad one, which means we have a dilemma: because they’re so good (how could pillowy buns encompassing salty, zingy and/or sweet fillings not be good?), where do you find the exceptional ones?

This list includes five of the city’s truly outstanding burgers; burgers so good they’ll make you think “holy cow” (or chicken or mushroom). From a chilli-chicken ‘burg Sydneysiders have been loving for yonks to the recently revealed 2.0 version of a new favourite, here’s to not wasting time on simply good burgers.

Cheeseburger, Bush
Redfern’s newly opened Bush is a kitsch restaurant inspired by Australiana. Stuffed marsupial toys sit at the tables, bunches of golden wattle and twig arrangements adorn the small space, and the outside space feels just like your best mate’s parents’ backyard.

There are only six items on the menu, and they’re all under $12 – cheeseburger included. The patty is encrusted with a layer of caramelised speck, which works perfectly with the meat, cheese, pickles and sauce. It looks exactly like you’d expect a cheeseburger to look, but it tastes so much better than you’d expect it to taste. Side orders include the crinkle-cut chips of your childhood, and potato and cauliflower dressed with green tahini, capers and smoked almonds. ‘Roo party pies and fairy-bread pudding feature on the menu too, so you may need to go back.

Squish Burger, Scout Bar
A little while ago, Canadian chef and funnyman Matty Matheson did an Icebergs pop-up and introduced a game-changing burger trick: he squished it. Literally. The result was spectacular enough to be put on the menu at sibling venue Bondi Beach Public Bar.

Now you can get a tuxedo version at fancy-sibling venue The Dolphin Hotel in Surry Hills, at its innovative upstairs bar Scout. While the original Squish has two patties (with lettuce and tomato served on the side, leaving those inclusions up to you), the Scout one features bite-y fontina cheese and shaved truffle. It’s served with the Monti Ogorki (a good-sized Polish gherkin) on the side, which you can eat first, last, or alternating between bites of the ‘burg – or you can pop it inside. All options work superbly, but the Squish is exceptional without it, too.

(Speaking of superb: there’s a new Chicago-style deep-dish pizza on the menu – topped with tomato, garlic, fresh mozzarella and prosciutto if you wish – that you must try. And the banana wine, too.)

Two excellent burgers feature on the menu, but the shining star is the cheeseburger: a good-sized beef patty in a just-sweet-enough brioche bun, complete with just-spicy-enough tomato, charred onions, truffle mayo and double cheese. And it comes with triple-cooked hot chips (according to our maths, double cheese plus triple-cooked chips equals 100 times yum).

The show-stopping congee and French toast with house-churned caramel ice-cream both warrant a mention. And QBF now has a liquor licence, so you can brunch with Mimosas, lunch with Negronis, or while away an afternoon with an interesting selection of “fun for the mouth” wines.

Classic Chilli, Little L Chicken & Burgers
Little L (which was originally named Olies, after the founder’s wife Olivia) opened in North Bondi in 2008 with the simple mission of making really great chicken burgers – and that’s exactly what they do. There are eight chicken options on the menu (plus four beef and one vegetarian), but the Classic Chilli is the best. It’s made with a lightly charred hunk of grilled chicken (covered with a house-made oil-based chilli sauce), plus cheese, crisp iceberg lettuce and house-made mayo. (Hot tip: add pineapple. Trust us.)

If you’re particularly hungry, opt for the Big Chilli. With extra chicken and extra cheese, it’s extra full stop. Little L claims its burgers are the “best in the east” (Sydney’s eastern suburbs), and we agree. You’ll also find them at Coogee and Prestons, but these babies are worth the drive from anywhere.

Chorizo Burger, Boque by Tapavino
Haymarket’s Darling Square is evolving into an exciting hub, and the recently opened up-market Maker’s Dozen food hall (in the dramatic Exchange building) is a good place to find delicious eats, including the fourth venue by Spanish restaurant group Tapavino, which is going for a vibe similar to Barcelona’s bustling La Boqueria market.

At Boque by Tapavino you can pick from tapas, charcuterie, jamon, salads and seafood (you won’t go wrong with anything) – but we’re loving the Chorizo Burger. Grilled chorizo is pretty excellent by itself, but when you put it between a sesame-speckled bun with cheese, vinegary purple cabbage and paprika salsa, it’s the perfect balance of tartness, saltiness, sweetness and juiciness.

You can order it to-go, or eat at the bar and watch all the action in the kitchen – in which case you should pair your ‘burg with a glass of Spanish wine. The pours are all 120 millilitres (instead of the standard 150), so you can have two.

The Vegan Burger, Mary’s Circular Quay
Our chief subeditor literally can’t stop thinking about it. The veggie-packed, deep-fried patty is fat and crisp, sandwiched in a soft milk bun (that’s obviously dairy-free), with lettuce, cheese (that’s obviously not cheese at all) and the special Mary’s sauce. This burger isn’t just for vegans – it’s for anyone who loves good times. Just like Mary’s.

This article first appeared on Broadsheet on August 29, 2019. Menu items may have changed since publication. 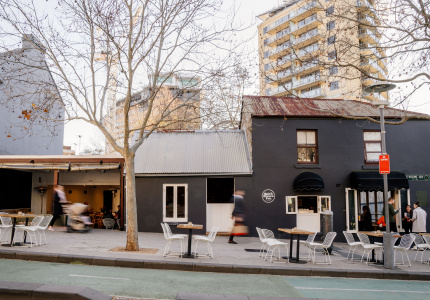