It’s serving dishes inspired by Sydney’s suburbs – from Hurstville to Greenacre – and their ever-evolving cuisines, including a citrussy schnitzel, octopus with curly endives and raspberry, and bouillabaisse bolognaise with prawn and bacon XO sauce. If you find yourself stepping through the roller doors of an industrial warehouse in a Marrickville backstreet and into a space reminiscent of a suburban-Australian immigrant’s home, then you’ll know you’ve stumbled into Baba’s Place.

The interior has been carefully curated using a mix of family heirlooms and keepsakes, and items sourced from op-shops and Facebook Marketplace. There’s velvet leopard-print-upholstered bar stools, a pebbled countertop and ’80s-style wall tiles, as well as mismatched chairs to accompany dining tables covered in doily tablecloths and plastic. The floor, meanwhile, is laid with Turkish rugs to complement the fire-engine-red wall hung with a gallery of old family photos.

While the setting may come across as purposely lo-fi, co-owner Alexander Kelly says the intention is rather the opposite. “We’re trying to highlight the beautiful aesthetics of suburban culture of growing up in Sydney,” he tells Broadsheet.

Just like the decor, the food menu by co-owner and head chef Jean-Paul “JP” El Tom (ex-Butter) doesn’t feature dishes synonymous with just one cuisine or culture, even though the business is named after Kelly’s Macedonian grandmother. Instead, it draws influences from Sydney’s diverse communities, including Kelly’s own Macedonian heritage, El Tom’s Lebanese background, and sous chef and co-owner James Bellos’s Greek roots, and combines them with “new age” techniques. It’s also a demonstration of how cuisines and dishes travel across borders, evolving and changing over time.

“We’re trying to take really basic dishes – what people perceive as ‘cheap food’ – and elevate it, and give respect to cultures that have been given the tag of needing to be under $15,” El Tom says. “We want to celebrate it and not take it for granted.”

At the same time, El Tom also wants to evoke what it’s like to live in Australia as a first-generation immigrant. “We all have memories of food and we want to bring them forward,” he says.

The menu often changes, but some of those experiences might come in the form of labne made in-house using culture from Lebanon; citrus schnitzel with lemon butter, charcoal-chicken sauce and fermented celery; and sous-vide octopus cooked over charcoal and served with curly endives and raspberry.

The short and punchy drinks list is centred around the Balkan spirit rakija, made by Sydney’s DNA Distillery. It can be enjoyed as a shot or mixed in cocktails such as the sumac and watermelon soda, or Baba’s Place’s take on a Negroni with Punt e Mes, chamomile tea and fresh pineapple.

The opening of the dine-in eatery at its current location has been almost 10 months in the making. The crew officially opened in June but were forced to operate as a takeaway during the recent lockdown. Prior to this, it ran as a pop-up at Newtown’s Rolling Penny, and temporarily opened last year in another Marrickville warehouse.

Despite the location changes and the ever-shifting food menu, what has been consistent is the team’s commitment to creativity and having fun with traditional recipes.

“We just want to create as many new flavours as we can,” El Tom says. 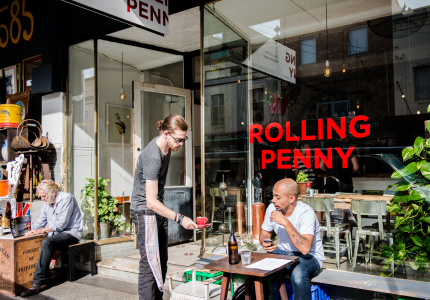