The laneway CBD eatery is plating up veal saltimbocca, tiramisu, lobster maccheroncini (with shaved truffles if you want it) and, down the track, Roman-style pizza slices, ciabatta sandwiches, coffee and cocktails. 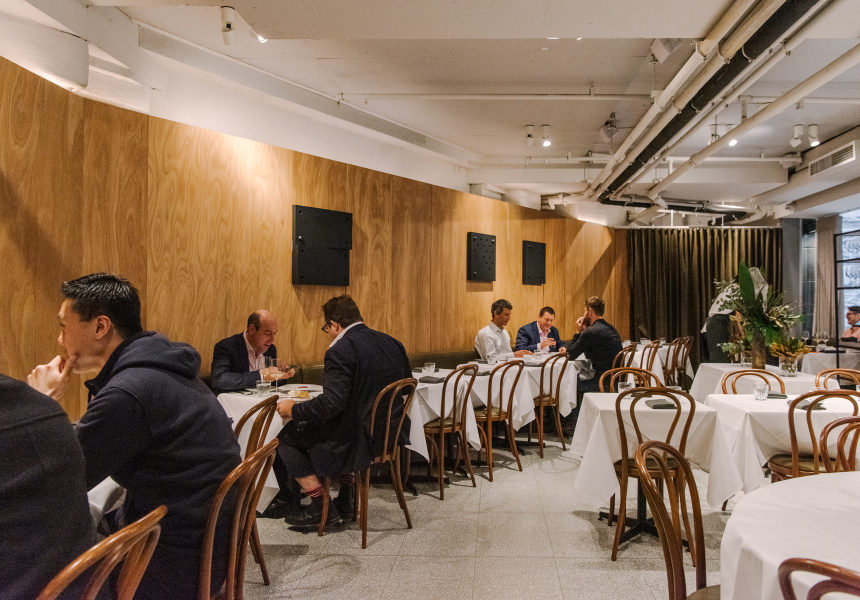 They had ideas to bake sourdough, pizza and other culinary treats, and sell them with coffee in the morning. At lunch they’d dish up unfussy Italian food, and something slightly more formal for dinner – nothing finicky though. “It was a dream,” Zanellato tells Broadsheet. “We were like ‘Fuck, this is perfect, we’re going to kill it’.

They had a couple of days to feel elated by their dream. They opened Restaurant Leo in March and were giving away coffee and pastries from the takeaway wing, Picco Leo, to those passing by – thousands of people from nearby offices and more coming to Angel Place for lunch. Then, suddenly, it all stopped. “It was going okay, but by the end of the week we were like, ‘Where is everyone?’ All the restaurants were forced to close due to Covid.”

Fast forward to June and they’re open again – not for takeaway, but for proper sit-down lunches with a menu based on their original plan. “We always had in mind that we wanted to do something casual, approachable, traditional Italian – adding a bit of our knowledge and technique but without destroying the tradition, not fucking it up,” says Zanellato, who lists on his resume Copenhagen’s Noma, Melbourne’s Attica and Sydney’s Ormeggio at the Spit.

It’s hard to think he and Firla – whose experience includes now-closed Sydney fine diners Est and Marque – could mess it up.

At the moment they’re serving lobster with maccheroncini (mini macheronni), made with a lobster ragu (lobster, lobster stock, shellfish oil, chilli, garlic, eschalots and anchovies) that’s boldly topped with parmesan and pecorino (Italian-food purists say seafood pasta should never come with cheese), and fresh truffles if you want. There’s also a simple veal saltimbocca that’s traditional in every way besides the plating, and King George whiting with a salsa verde mixed with German pickles and mustard. There's also borlotti bean soup, a risotto with cuttlefish and peas and of course, tiramisu.

This all may change in the future, though. Both chefs are zealous supporters of seasonal cooking, and on top of that, this is not only a trial period but a time of great change and uncertainty for everyone in the industry.

This is what we do know: there’s a lunch menu built on the owners’ dedication to Australian produce and making everything in-house (pastry, bread, pasta, pickles – the lot); slick service headed by restaurant manager Alex Grenouiller (Oscillate Wildly); and a wine menu created by Fabio Sercecchi (Balla) that mixes boutique drops with big names. Dinner service will most likely resume in the next few weeks. Here you’ll see a more technical dishes – “not more complicated, just something a bit more sophisticated, another layer,” says Zanellato.

Some time after that, depending on the return of foot traffic, Picco Leo will reopen for Roman-style handheld pizza slices, takeaway sourdough loaves, ciabatta sambos, Little Marionette coffee and a cocktail-forward aperitivo in the afternoon.

This article first appeared on Broadsheet on July 1, 2020. Menu items may have changed since publication.