Get crunchy sfogliatelle filled with prosciutto and house-made ricotta; mini pizzas topped with carbonara; five types of bread; and panini oozing with melty cheese. And there’s a gelato cart serving decadent tartufo. Plus, the restaurant’s entire menu is available for takeaway and delivery. 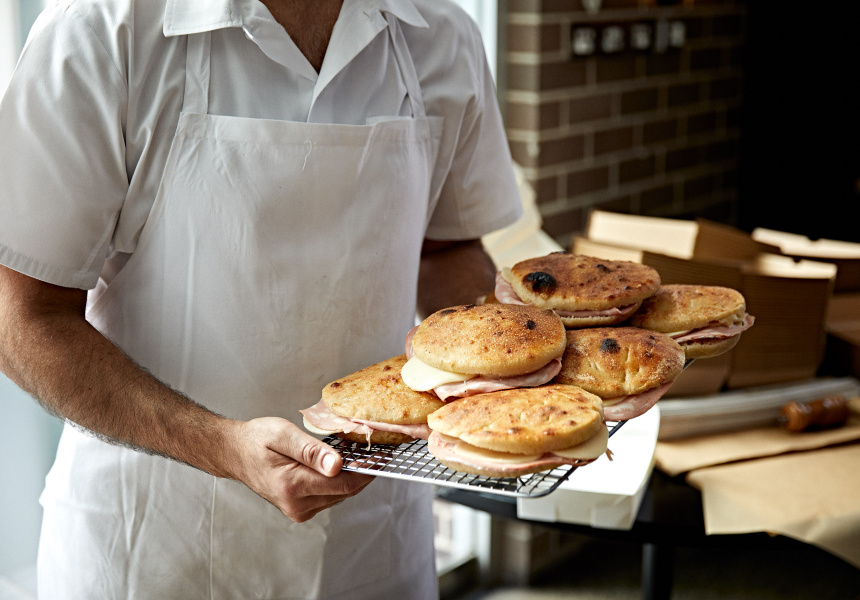 When the coronavirus put an end to dining-in in late March, Sydney’s restaurateurs had to think fast. Among them was Flavio Carnevale, owner-chef of popular Roman-inspired Rushcutters Bay restaurant Marta. Within days he was offering his regular menu to take away and he’d set up a weekend bakery.

Every Saturday and Sunday from 9am, locals line up (maintaining a 1.5-metre distance, of course) in the plaza Marta opens onto for fresh breads, focaccias, pizzettas, pastries and cakes. Carnevale and his team cook everything on-site in just two ovens, so hot goodies are continually hitting the shelves throughout the morning.

“I spend all morning running – literally running – in a circle, from the kitchen to the counter and back to the kitchen,” says Carnevale, who spent many years working for a baker in Rome before becoming a chef and moving to Sydney.

Everything sells out by early afternoon. Usually it’s the sfogliatelle – flaky yet crunchy shell-shaped Roman pastries with gooey fillings (either sweet or savoury) – that go first. “One day we made a baker’s mistake: we made too many sflogliatelle,” Carnevale tells Broadsheet. “So, we thought we’d try a new filling of prosciutto and house-made ricotta – and it’s so popular. It disappears as soon as we put it on the shelf.”

There are five kinds of breads, including a Lariano-style sourdough (from the region of Lazio, which includes Rome) and an organic semolina-and-potato loaf; pizzettas (there’s a carbonara version topped with egg, pecorino and guanciale, a cured pork); focaccias (including a gluten-free number with olives and tomatoes); and stuffed panini. “We slice the panini when it comes out of the oven, fill it with cheese, which starts melting, and serve it straight away. Can you imagine biting into that?” says Carnevale. (Yes.)

On top of baking these regulars, the team is also working on new creations — from doughnuts to mini-orange carrot cakes to coda di aragosta, a pastry filled with custard and sour cherry. “It’s a real team effort. I’m so glad I haven’t had to lay off any of my staff because of the crisis. The community has been really, really supportive,” says Carnevale with tears in his eyes.

Should you arrive too late for the baked goods, don’t worry – there’s a gelato cart peddling half-a-dozen or so flavours, all made in-house. “One of my ex-waiters, Diego, is also an ice-cream-maker from Rome,” says Carnevale. “When Covid-19 happened and we were thinking about what to do, he asked, ‘Could I make ice-cream?’ I said, ‘Yes, go for it’.”

Flavours include chocolate; hazelnut; pistachio (made with Italian nuts); and a vegan chocolate sorbet made with coconut water. There’s also tartufo, a decadent ice-cream dessert in which two flavours are shaped into a smooth dome and encased in chocolate lava.

Marta’s usual menu is also available for takeaway and delivery Tuesday to Sunday, and there are specials too, such as slow-roasted lamb leg and potatoes for four; handmade cannelloni; and rabbit ragu gnocchi. Check Facebook for daily updates.

Marta is at 30 McLachlan Avenue, Rushcutters Bay. Opening hours for takeaway and home delivery are 11am to 9pm, Tuesday to Sunday. (It’s a good idea to order in advance – call (02) 9361 6641.) The bakery opens at 9am on Saturdays and Sundays.