From the duo behind Lola’s Level 1, the all-day venue is turning out a roll call of French classics: croque monsieur drowned in creamy bechamel, a sure-to-be-popular steak frites, and a rich crab bisque souffle. Take a seat in the handsome dining room, or people-watch Parisian-style at a streetside table. 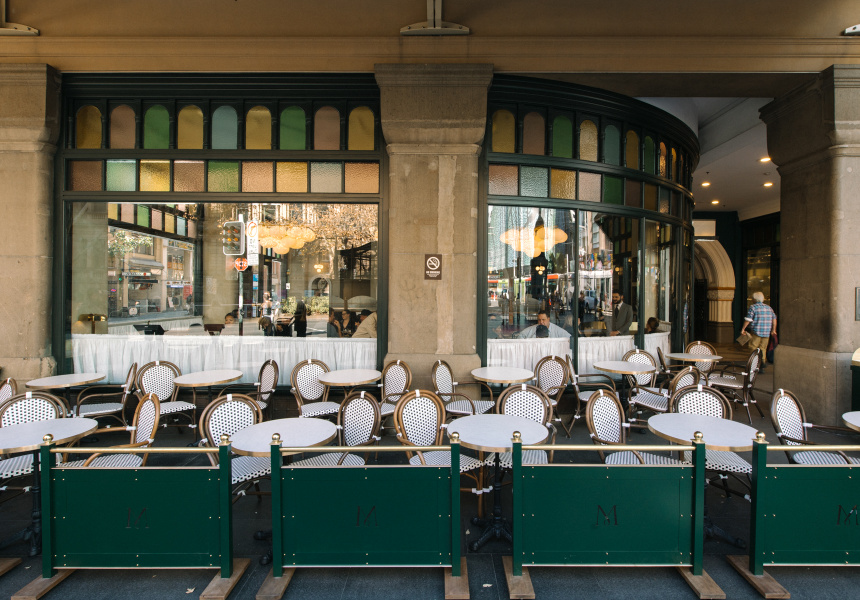 The Queen Victoria Building finally has the grand restaurant it deserves with the opening of Manon, a lavish French brasserie from hospo vets Manny Spinola and Marco Ambrosino.

“It’s the heart of the city,” says Spinola, who has spent the last 25 years running the QVB’s Tea Room. Last year he joined forces with Ambrosino, who used to co-own Sydney institutions 10 William St and Fratelli Paradiso, to open Bondi hot spot Lola’s Level 1. “I’ve always walked past this spot and dreamed of opening a restaurant here. It was crying out for a brasserie or a grand cafe.”

The restaurant, which is open for breakfast, lunch and dinner, and has designs on a late-night supper service for Friday and Saturday nights, is one of the year’s most ambitious openings.

In the kitchen is rising star Thomas Boisselier. The duo transplanted Boisselier from Lyon, where he was deputy head chef at the three-Michelin starred restaurant at the Hotel et Spa du Castellet.

Boisselier’s menu is centred around the classic French dishes on which he was raised. Breakfast is heavy on tradition, with pastries, baguettes, and both croques madame et monsieur taking centre stage. “Instead of toasting the croque monsieur with the bechamel on top, we bake it and then pour the bechamel over it,” Boisselier says. “It’s a lot more saucy.” The French do like their sauces.

Come lunchtime, think soupe du jour, burgers, and bone marrow tartine, before settling in for an afternoon of sweets. “We will have crepes and waffles between 3pm and 5pm,” says Ambrosino. “And classic French hot chocolates, muddy and dark and finished with a dollop of cream at the table.”

The dinner menu reads like a roll call of classic French hits. A raw bar of oysters and caviar set a decadent tone, but Boisselier is particularly proud of his beef consommé en croute, topped with a sweet pastry crust, and a simple baguette served with radish, anchovies and butter. “We like to eat this in the spring,” he says.

Escargots are a-go, served out of the shell. “It’s very saucy, red wine-y, garlicky,” says Boisselier. (Again, with the sauces.) Steak au poivre and steak frites are sure to be popular players, and so too will be a crab bisque souffle, crafted in traditional New Orleans style. For dessert, sweet stalwarts like mille feuille and vanilla souffle take a bow.

The wine list was curated by sommelier Harry Hunter and features more than 400 bottles, mainly French. Guests can sip gosset by the glass on one of the dark velvet bar stools, facing the arched, mirrored bar, or on one of the 80 outdoor seats. The tables, which face the statue of Queen Victoria and run down the York Street side of the building, will bring a Parisian people-watching vibe to the busy corner.

“We’ve been blessed with an amazing location on one of the country’s most iconic corners – right opposite Town Hall,” Spinola says. “I really love this city, and I want to add to the amenity of Sydney. I truly hope Manon is here for a very long time.”