It comes after its founder collaborated with Aboriginal author and advocate Bruce Pascoe to create a loaf of bread using native Australian grains. Get in before the queues form. 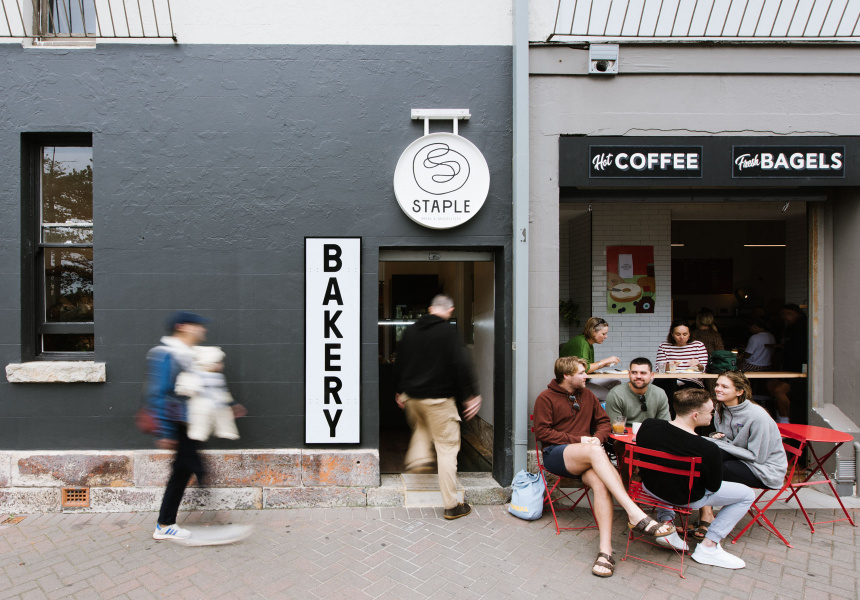 Now Staple is open five days a week, with three locations and people regularly queuing around the corner. Late last year, Partington opened his second site in Cromer to handle an increase in wholesale orders and purchased an American stone mill to grind his own flour (he’s one of only a handful of commercial bakers in the country to have done so).

Opening a third outlet in Manly was a nostalgic move for Partington. Ever since he started baking bread back in 2012 as a means to recover from heart surgery, he had always dreamt of owning a hole-in-the-wall by the beach.

When asked the secret to Staple’s success, Partington admits he doesn’t do things that differently to other bakeries. Yes, he opts for organic grains and flours, but that’s not unheard of these days. “I think there is just an awful lot of love that goes into everything we do.”

“From the get-go I was taught that people have a choice [of where to buy], and you can’t abuse that,” Partington tells Broadsheet. “You are a community service, and it’s a privilege to bake for them and serve them.”

This sense of community can be followed like a trail of breadcrumbs through every aspect of the business. Partington treats each person who walks through his door like a friend. During the soft opening, members of the Bold & Beautiful swim club (who Partington has swum with) came in for discounts, and drivers stopping at the lights outside were offered free loaves of bread. The thing that most excited him about getting his own mill was how it strengthened his relationship with local farmers, who now ask him what grains he’d like them to grow.

It was through his community connections that he found himself working alongside Indigenous author Bruce Pascoe as part of Good Food Month, baking bread made from native Australian grains.

“That was pretty wild,” says Partington of the experience. “My good friend John Reid [of Red Beard Bakery in Victoria] was originally approached but told them I was the person they should be talking to.”

Pascoe gifted Partington 500 grams of kangaroo grass wheat, which grows abundantly in Australia and was used by the Indigenous population 60,000 years ago.

“I screwed up the first batch – it was an absolute disaster,” says Partington. But after combining the wheat with a rye, he produced a successful loaf with a distinct but tasty “grassy” flavour to it. “My hope is that we start introducing those sorts of grains more into what we do here.”

The current selection at Manly is similar to that of the Seaforth store – sourdough loaves, baguettes, rye and pastries including croissants, cinnamon scrolls and vanilla slices, which are made with rye and wholewheat puff (“no one does that”, says Partington). It’s all baked with fresh flour that’s been milled in-house (it’s also available to purchase in-store). With the new bakery located next to Barrel One Coffee Roasters and The Artisan Cheese Room, this little corner of Manly is becoming a thriving hub for those seeking out great food and coffee.