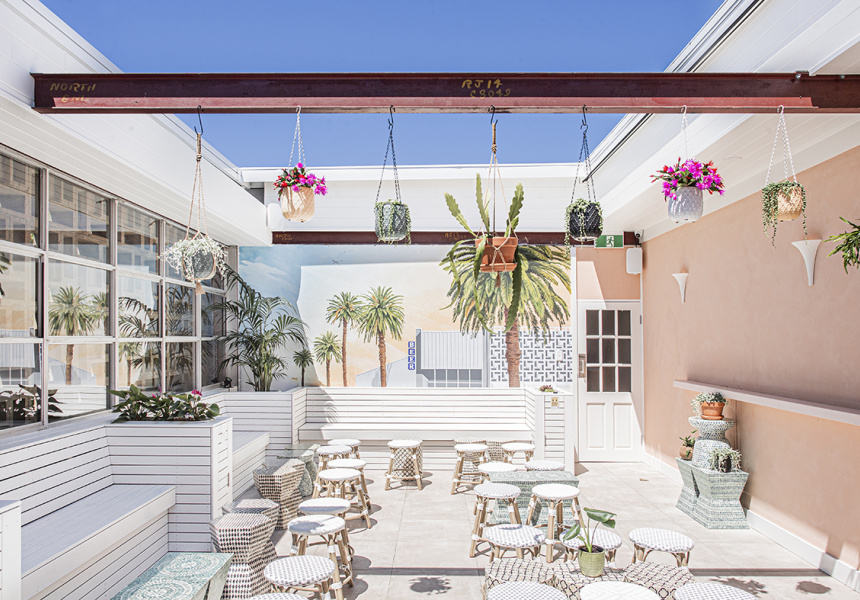 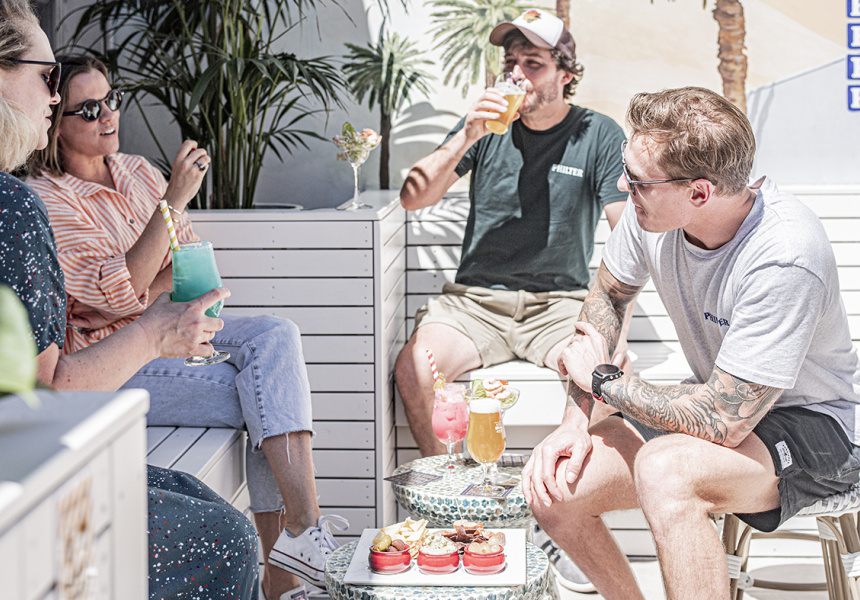 Rooftop bars – we really love them. We wish we had more of them.

And now, thanks to the team at Philter Brewing, we do – and in a suburb that’s so far been lacking in them. Say hello to Marrickville Springs, a retro-flavoured oasis on top of the brewery’s inner-west warehouse taproom. It opens this Friday.

Team Philter has tapped into that Palm Springs energy with stacks of pastel-coloured tiling, rows of white timber banquettes, and enough potted palms and greenery to make you feel like you’re loafing in a stylish desert resort. It’s also splashed out on a mural by local artist Mielo and a 10-metre retractable roof (“the biggest one we could find”, says Constantoulas), so the space will be weatherproof long after the summer sun fades.

There’s some local pride on show, too. Behind the breezeblock cocktail bar, a custom neon light depicting Marrickville’s bin-diving avian icon, the ibis, shines down on the beer taps. On pour is a selection of Philter favourites – including the brewery’s heavily awarded XPA – along with a tight list of Australian wines, and the summer’s most divisive frozen beverage: the craft-beer slushie. Classic cocktails by Jacoby’s in Newtown will lubricate the opening weekend, with an in-house list to follow in the coming weeks.

As with the downstairs bar’s pub-like fit-out, Constantoulas and co-founder Mick Neil tackled the design job themselves – to great effect. And while it’s taken more than a year to put Marrickville Springs on top, Constantoulas says the long game has worked out for the best.

“We put this through on our original DA [development application], so it was always in the plans. But obviously Covid hit last year and it changed our perspective – [we thought] let’s focus on getting the brewery open, and upstairs will be something we can add on in a year’s time,” he explains.

“So we wanted to open in early spring, but then Covid hit again. It didn’t stop work or anything, but it allowed us to spend more time thinking about it and getting more work done ourselves, which is a good thing. It’s nice to know that a lot of the elements have the blood, sweat and tears of the owners in the building.”

Now with two unique spaces at its disposal, Philter will run downstairs as a dine-in space for longer bookings, and use the 60-head rooftop as a landing point for walk-in guests ploughing their way through the Inner West Ale Trail.

“On one wall we’ve got a dry bar where you can come and grab a spot, have a drink or two and move on, instead of feeling like you’ve got to settle in and have a meal. It’s a very different vibe,” says Constantoulas.

“That’s what downstairs was as well for us, to give a slightly different experience to the other breweries. We want people to be out and about – not just visiting us, but visiting all the other independent craft breweries in the inner west. Hopefully we’re just another stop [so] people can get a completely different experience to what they’ll get at Batch, The Grifter, or Young Henrys.”