First Look: Mary’s Circular Quay Has Opened. And The Menu is Everything You’d Expect and More

Burgers, thumping music, craft beers, sustainable wine and a fern-filled outdoor dining space with 30 seats. And it can do the whole menu vegan. While the remodelled underground venue, appropriately redubbed Mary’s Underground, is still a month away from sound checks and the gentle spinning of ducks in its new French rotisserie, this week the venue’s first phase opens: the street-level burger bar.

It’s in the space previously known as The Basement Upstairs and will offer the same Mary’s burgers-and-pounding-music experience we already know and love, but with one major twist: the entire Mary’s menu can be recreated vegan.

“There’s a wider conversation about sustainability that we all need to own,” says Smyth of the team’s decision to develop plant-based alternatives to its existing menu items, including vegan burgers, vegan “fried chicken” (actually fried cauliflower) and a by-all-accounts-excellent vegan mash and gravy.

“Mary’s has tried to be as inclusive and welcoming as possible to everyone. One group of people who have not been made to feel 100 per cent at home is vegans. We wanted to open our arms to that part of the community, and we wanted to do it in a Mary’s way.”

All traditional Mary’s options will remain available. Smyth says all herbivores need to do is choose anything off the menu and ask for it vegan.

“We’ve worked really hard on making sure it’s fucking tasty,” he says. “We didn’t want to put a vegan burger on the menu. We want vegans to come in and be able to ask for a Mary’s Burger but have it vegan.”

The team has developed a vegan burger patty packed with mushrooms, carrots, beetroot, raw white beans (“for crunch”) and a little soy protein. Then, to make it taste incredible, Smyth says, “we deep-fry the motherfucker.”

“We’re really excited about being able to open up Mary’s in an uncompromising way to another part of the dining community,” Smyth says, standing below an illuminated sign that once said “Upstairs” but is now rearranged to say “Ratpiss”. “That’s what Mary’s has always been about.”

While Smyth and Graham insist the rest of the operation will be “business as usual”, fans of the original burger bar might notice a few differences. Where a portrait of influential British chef and businessman Marco Pierre White has kept watch over the Newtown bar, a different patron saint holds vigil at Circular Quay.

“Anthony Bourdain was a huge influence on Kenny and me,” Smyth says of the late American celebrity chef, author and travel documentarian. “We wanted to have a nod to him because he stands for the same no-nonsense, fuck the world, ‘Let’s just go get it and create some beauty while we’re doing it’ attitude that we do.”

The venue’s characteristically loud music will also be there, but instead of the ’80s and ’90s metal that pumps at the Newtown venue, the soundtrack at Circular Quay will be influenced more by the current UK punk movement.

“I’m not telling you that [Metallica’s] For Whom the Bell Tolls isn’t going to be on there,” Smyth says, “but these days we’re more interested in where music’s going right now.”

As with the team’s other venues (which include The Lansdowne and Unicorn Hotel), beers will come from inner-west breweries Young Henrys and Grifters, as well as plenty of other craft brewers. The wine list will feature 20 wines by the glass; all organic, all sustainably farmed and all leaning heavily toward Australian and New Zealand producers.

Mary’s Circular Quay includes a fern-filled dining area in busy Macquarie Place, which is there to provide a temporary inner-city sanctuary. “We’re right in the hub of office world. They talk about breakout spaces in offices and I can’t think of a better one than sitting down, taking off your tie and just having a fucking break,” says Smyth.

The opening of Mary’s and The Basement Upstairs follows years of lockout restrictions, debates on how to revive Sydney’s nightlife and a state election that saw the incumbent government re-elected. It also comes after a tumultuous month for Mary’s. It was targeted by an aggressive online campaign prompted by a sardonic pre-Easter social media post. But despite the election results, Smyth remains optimistic about the recovery of the city’s cultural pulse.

“We’re not waiting for a fucking hero. We’ve got to change the conversation ourselves and we’ve got to keep putting pressure on. Was I disappointed [about the Liberals being re-elected]? Yeah. Was I surprised? No.

“The fact that the same government is still in and they’re not committed to culture or to the arts, it’s just what happens. Creative people and musicians fight to have their voices heard, and we’re a part of that.

“In the meantime, we’re going to throw a killer party.”

Mary’s Underground is slated to open in four weeks. 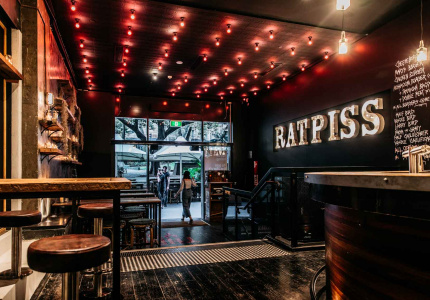