First Look: Little Felix Channels Paris of the 1920s, Has Towering Platters of Cheese, and Wine Served in Magnums

At this new CBD bar you can also go fancy, by opting for premium spirits for your cocktails. 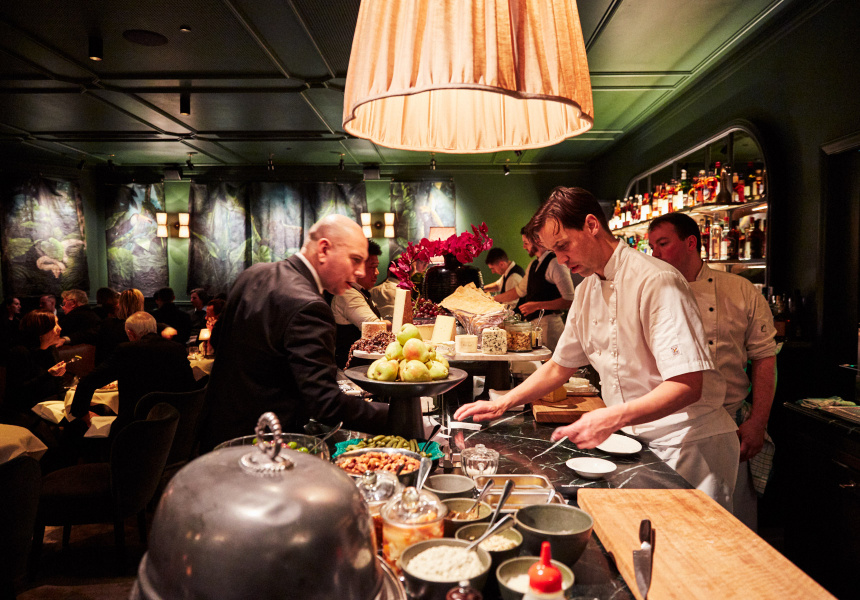 Paris. 1922. You walk into the bar at the Ritz Hotel and order an aperitif. At a table on the other side of the room, Hemingway sits sipping a drink as a soundtrack of Louis Armstrong and Duke Ellington escapes from a nearby turntable.

That’s the evocative premise behind Little Felix, the latest den of refined inebriants from hospitality giant Merivale. It’s on Ash Street in the heart of its CBD Ivy precinct.

It’s the group’s first cocktail bar ribbon-cutting since Charlie Parker’s opened beneath Fred’s in Paddington in 2016, and the group’s bars manager, Sam Egerton, says the moody, candlelit lounge has been designed, in part, to serve as a companion venue to neighbour, French restaurant Felix.

“In Paris, you have really successful, longstanding restaurants getting to a position where they can’t really fit any more people in there. They’re packed every day. They find a space nearby to put a small bar that allows them to try and catch a few more guests, or to keep their business a bit longer. That’s kind of what the corollary relationship is between Felix and Little Felix,” he says.

“It’s not Felix’s cocktail bar, though; it does have the same head chefs putting out the food, and a similar vibe, but it’s a different space.”

Headlining the list of libations is a concise assortment of cocktails inspired by Parisian classics of the 1910s, ’20s and ’30s.

“A Negroni with bourbon is how we usually describe it to guests,” Egerton says of the vibrantly red elixir.

The Aperetif menu includes only two cocktails, but each is available at a “Villages”, “Premier Cru” and “Grand Cr” level. The Le Ricain, for example, is mixed with Hennessy VS, Cointreau and Le Birlou (chestnut and apple liqueur) when ordered at Villages level for $23, but comes with the highly prized Hennessy Paradis and Bertrand Curacao when you opt for the more premium Grand Cru option. It’s an investment at $95 a pop, but a rare treat for those who know their Hennessy from their Hennessy.

Little Felix joins the cocktail world’s growing movement away from extravagant garnishes and theatrical effects, choosing instead to frame drinks in fine glassware, chilled with crystal-cut ice. “They’re all really simple and restrained,” Egerton says of the drinks. “Bright, fresh, sessionable, delicious … everything you want.”

The bar’s wines, meanwhile, are served exclusively from magnums. Curated by Merivale sommeliers Jean-Charles Mahe and Franck Moreau, most of the tipples on the 17-strong list are available in short pours, long pours, carafes and by the magnum. Egerton says there’s good reason to celebrate the XL bottle.

“There’s a lot of science around how wine evolves in larger-format bottles,” Egerton says. “You’re accessing different flavours … And it looks pretty cool having someone serve you magnums at your table.”

If you’ve got a specific hankering for one of Felix’s 2000 bottles, though, the staff will happily fetch it from next door for you.

Adorned with tapestries of fauna-filled jungle scenes evoking early-20th-century safaris, the fit-out is the work of design company Acme & Co, responsible for creating the aesthetics for The Grounds of the City, Archie Rose and Fred’s. The room’s emerald green tones are softened with the gently flickering lamps at each table and the balletic movement of the venue’s crack team.

“Aesthetically, Felix and Little Felix have been approached completely independently,” Egerton says. “We pitched ‘classic Parisian hotel bar’. We wanted it to be a fun, enjoyable space. There’s a real contrast in the design, colour scheme, lighting and music.”

Food is simple and designed to pair with both the drinks and the venue’s theme, offering a range of largely French cheeses cut from a towering platter of fromage at the bar. There’s a line of house-made charcuterie too, including the must-order parfait, and a short list of tartines (open sandwiches), topped with steak tartare, smoked salmon, or the transcendent raclette and grated black truffle.

“It’s the sort of food you can graze on while you make your way through a magnum of wine or a couple of cocktails before you figure out what the rest of your evening has in store.”

This article first appeared on Broadsheet on August 9, 2019. Menu items and prices may have changed since publication.