Head in for a glass of something fun before dinner, or stick around for a three-course meal. Knird – “drink”, spelt backwards – is whatever you want it to be. New Crows Nest wine bar and diner Knird – “drink”, spelt backwards – is in the business of good wine, served with sincerity. Having worked in hospitality before launching into a lengthy career in wine sales, owner Andrew Day has been dreaming of a place that gives equal footing to its service and its wine. That place opens today, October 13.

“The whole idea of Knird was to be part of a community,” he tells Broadsheet. “Because we’re not a reservation-driven venue, it’s all about fluidity; being able to come in for a glass of wine and then move on.

“People tend to have wine up on a pedestal where it doesn’t belong. Wine is a drink. It can be cheap and fantastic, and it can be expensive and horrible.”

Day has brought in Joe Turnaturi, former sommelier at Flying Fish (where Day was a waiter more than 10 years ago) and The Boathouse on Blackwattle Bay. And while they pay homage to all things Australian – Day describes our wine industry as “one of the most dynamic and diverse in the world at the moment” – they can’t ignore the greater world of wine.

“If we think the wine is tasty and has a place on our menu, we’re going to put it on,” says Day. You can also order classic cocktails and a range of commercial and craft beers.

If you’re craving a three-course meal, you can get it at Knird. If a small plate and splash of something special before dinner is all you’re after, they can do that, too. The menu, by chef Jeremy Ward (former sous chef at Cottage Point Inn), is modern Australian with European influences. Nothing costs more than $20 a plate, and you’ll find dishes such as burrata served with soybeans, peas, broad beans and pickled kombu; pork and fennel polpette with a thick yet fluffy tomato sauce and sweet pickled fennel; and roasted zucchini with spring vegetables, kombu, preserved lemon and toasted quinoa.

While the space is tight, not an inch has gone to waste. “I picked the terrazzo floor tiles first, and it all went from there,” explains Day. There are brass accents, fluted timber, drop-pendant lights and a pretty pink marble bar. “But wait until you see the bathroom,” says Day.

Its walls are wrapped in handmade wallpaper crafted by Helen Masters, (who’s also head winemaker at New Zealand’s Ata Rangi). The print is called “Vices” and depicts the five botanicals from which hops, juniper, tobacco, caffeine and cocaine are derived. 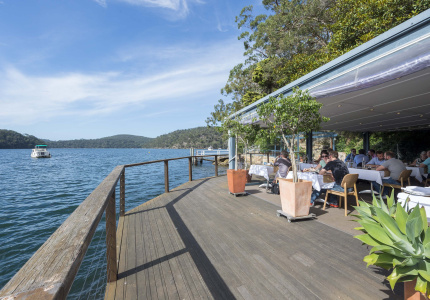