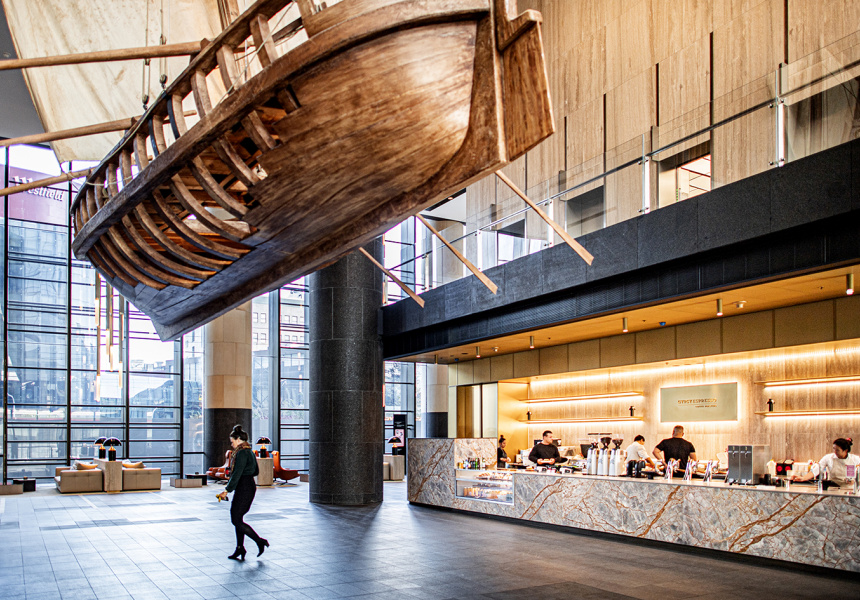 As if George Nahas wasn’t already busy enough with six venues – he’s the co-owner of Gypsy Espresso, and runs an Italian diner in Australia Square and Fortuna Drink & Eat in Darlinghurst, among others – he’s gone and opened a seventh venue. This time, he’s moved away from the inner-city, into the lobby of Sydney’s biggest commercial tower, which is the centrepiece of the Parramatta Square development.

“I’ve been in lobby cafes in different buildings and I just wanted to be in the biggest one in Sydney,” Nahas tells Broadsheet

“I wanted to do something for Parramatta that was next-level,” Nahas says. “With a lot of planning and learning from Alexandria, and the help of Mario [Szucs] and Will [Smallbone], my [business] partners at Gypsy … we put together this very technical Modbar.”

Each of the filter coffee taps will offer a regular rotation of single-origin roasts, while the Modbar will be brewing Gypsy’s house blend that comprises three origin beans from Colombia, Brazil and Costa Rica. For something “stronger, punchier and full-bodied” the team has formulated the Dark Secret, a Colombian-based blend with beans from Papua New Guinea and Brazil. Otherwise, there’s an oat milk cold brew with manuka honey and cinnamon.

The menu features a mix of “nice, big and wholesome” sandwiches and salads. For breakfast this includes a chorizo egg muffin and the egg-wich, a smashed-egg sandwich with avocado and Dijon wasabi mayo. Come lunch time, opt for the Always Greener panini, the ultimate salad sandwich with house-pickled carrot and celeriac, beetroot, iceberg lettuce, tomato, avocado and sprouts, or the baharat-spiced chicken sandwich with smashed avo and cabbage and fennel slaw. On the salad front, options include an Asian-inspired wild rice salad with ponzu, red and white cabbage and a roasted sesame dressing, and the three-grain salad with black barley, brown rice, quinoa, kale, roasted carrots and citrus dressing.

All of this can be enjoyed in the building’s lobby, which features a permanently suspended replica of the Rose Hill Packet boat, the first European boat built in Australia that sailed from Sydney Harbour down Parramatta River.