It’s all about giant drinks and water views. 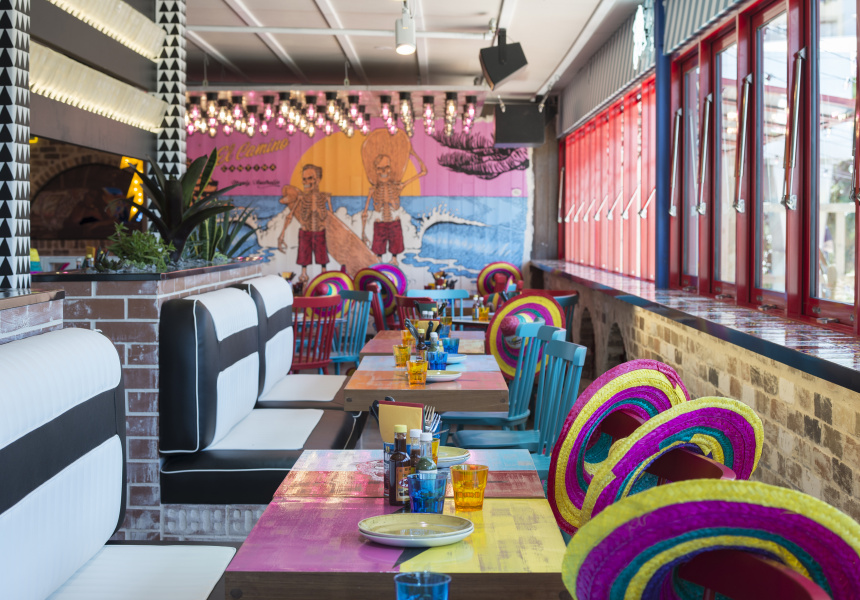 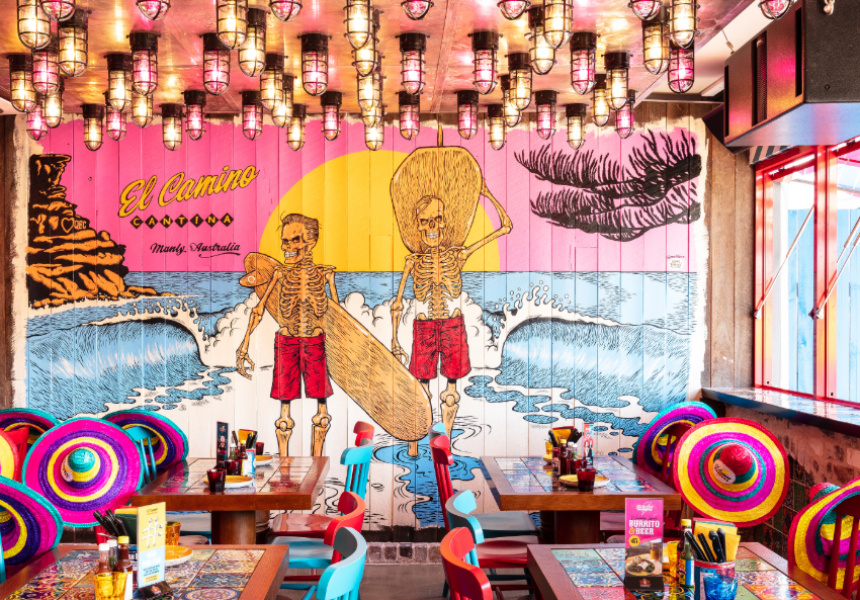 Unlimited free tortilla chips and salsa, frozen Margaritas and colourful sombreros might be features of an unashamedly kitschy Tex-Mex restaurant, but they were what kept El Camino Cantina in The Rocks bustling. Now, everything that made the original a crowd favourite has been replicated and taken over the bridge to the revamped rooftop of Manly’s wharf.

The 365-seat restaurant, half of which overlooks the harbour from an outdoor terrace, has a much lighter colour scheme than the flagship. It’s reminiscent of a beach hacienda – it has cacti, intricate tiling, exposed bricks and stone finishes – mixed with neon lights, a rock’n’roll soundtrack and muscle car-inspired fittings.

This beachy, rock'n'roll mashup culminates in a spectacular mural by legendary Aussie designer Ben Brown. The artwork depicts two skeletal figures coming in from a surf at the Queenscliff end of Manly Beach. Brown is a renowned figure in the Australian surf art and punk music scenes. His extensive CV includes murals at El Camino's original venue in The Rocks, as well as tour posters for Pearl Jam and Nirvana.

Behind the horseshoe-shaped bar there are eight machines churning out frozen Margaritas (or should we call them the party makers?). They come in three flavours – classic, mango and strawberry – and you can opt for a 400-millilitre or 700-millilitre glass. If you’ve got a real thirst there’s a two-litre tower.

The new venue doesn’t stray too far from the Tex-Mex formula. There’s guacamole, jalapeno poppers, chargrilled fajitas with a choice of protein, quesadillas and nine different tacos. If you’re up for the challenge (and that way inclined) there’s a one-kilogram burrito stuffed with an assortment of proteins, beans and chipotle that’s free if you can finish it in under an hour.

Owned by Rockpool Dining Group (Rockpool Bar and Grill Spice Temple, Bar Patrón and more) (RDG), this is one of two restaurants the company has opened on the new Manly Wharf rooftop. Its neighbour is the group’s Japanese restaurant Sake.

These join the growing list of recent openings by the hospitality group, including Black Label Burger Project in the CBD, a 550-seater Fratelli Fresh in Darling Harbour and a six-day pop-up of Neil Perry’s (now the group’s chief brand and culinary officer) first ever restaurant, Blue Water Grill, in late November.

RDG’s chief executive officer Thomas Pash says the decision to expand El Camino is because it’s the group’s fastest-growing brand. “El Camino has done really well in the last year, and it’s expected to turn over more than $6 million this year,” he says.

But opening El Camino Cantina in the north shore wasn’t the first choice, according to Pash. “Where we have opened El Camino, it was potentially going to be Fratelli Fresh. But based on the research of our customer base, we felt that the location would be more suitable for El Camino.”

This article first appeared on Broadsheet on November 8, 2018. Menu items may have changed since publication.