It’s ended its Kinokuniya chapter with a new spot that pays tribute to its previous bookshop locale. Under the striking “turning page” design, order black-truffle toasties, lots of cakes and its new peanut, chocolate and caramel tart. 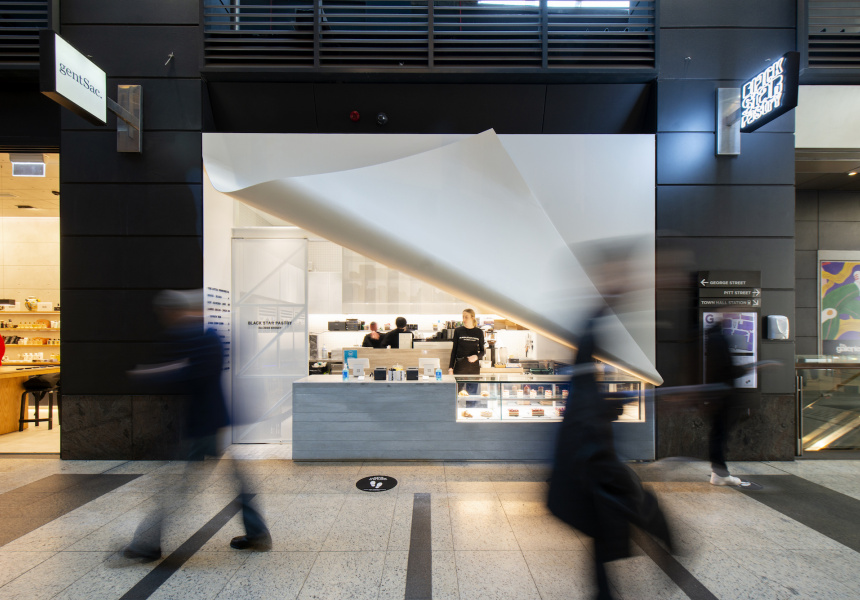 Trekking up two escalators and weaving your way through books and people at Books Kinokuniya to get to Black Star’s Galeries is now a thing of the past – the bakery has opened a new shopfront on the shopping mall’s ground floor. The new high-foot-traffic location (formerly a nut shop) is near the Pitt Street entry, so office workers can pick up croissants and Little Marionette coffee as they pass by from Town Hall station in the mornings.

“We love the Galeries’ central location, but had outgrown our corner of Kino,” Black Star Pastry’s general manager Josef Murray tells Broadsheet. “The main advantage of the new location is that we can now open at 8am [Kino didn’t open until 10am] to cater to the morning coffee crowds.”

The new store will also have a cake-collection area, meaning you can pre-order baked goods online and skip the queue to pick them up. Like its upstairs predecessor (which opened in 2015) the new bakery will have a more streamlined menu and selection of grab-and-go cakes than the Newtown and Rosebery stores. Not only will you be able to pick up the internationally famed strawberry-watermelon cake on your way to the office, but you can also grab plain, chocolate and ham-and-cheese croissants; custard flans; and a new addition to the menu, the peanut, chocolate and caramel tart.

A limited edition black-truffle toastie (which has been a hit at the other locations), made with potato-focaccia bread studded with rosemary and button mushrooms and filled with truffle bechamel, smoked ham and gruyere will also be available.

Black Star fills more than 1000 cake orders each week, and its full range – including the Pistachio Lemon Zen Cake, Vegan Chocolate Popcorn Cake and Raspberry Lychee Cake – will be available to order ahead of time for collection.

“We’ve always had a great customer base at the Galeries – we sell more cake here than any other store. So the move is about making Black Star even more accessible to our existing fans and easier to find for tourists – when they return,” says Murray.

The new store’s design pays tribute to its original location in the bookstore, with a “turning page” partly obscuring the interior. A simple glass case displays the cakes and pastries, and there’s seating available upstairs for customers who want to savour their purchases.

Black Star was established in Newtown in 2008 by Christopher Thé, and became a sensation for its delicate strawberry-watermelon cake – a pile of cream infused with rose water spread between almond dacquoise (nut meringue) and slices of watermelon and topped with strawberries, grapes and rose petals. It has since opened several other stores across Sydney, including one in Melbourne; Thé sold out of the business in 2019.

This article first appeared on Broadsheet on July 30, 2020. Some details may have changed since publication. 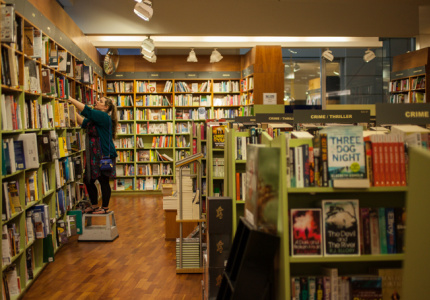