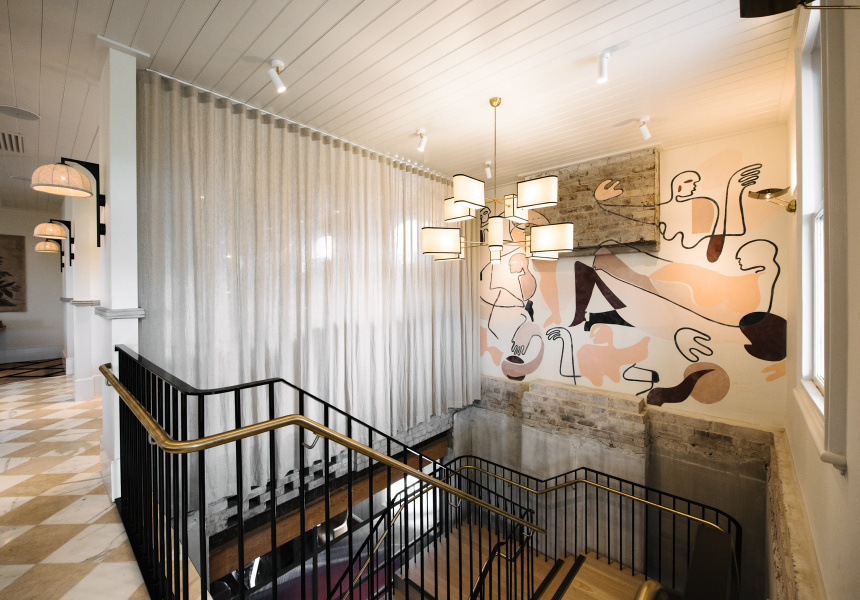 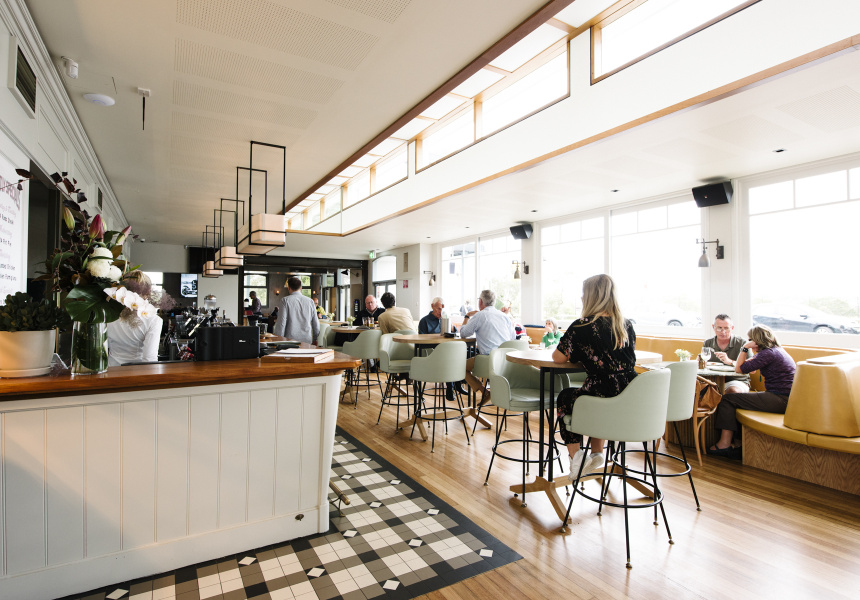 Woolwich Pier Hotel is hardly new – the lower-north-shore pub came on the scene in 1885. But following a three-month renovation it’s reopened and it’s looking pretty great for its 133 years.

The two-level venue once resembled a colonial clubhouse crossed with a contemporary British gastro pub, but now it has adopted a more contemporary European look.

Alexander & Co (The Morrison, Watsons Bay Hotel among others) is behind the refurb and has incorporated natural-coloured timber, Picasso-esque artwork, and hues of blush pink, tan and olive green. There’s also a mix of rendered and exposed-brick walls (the outside is also now sparkling white), and geometric patterns on the carpet and tiles, which combine to create an elegant and beautiful package.

The renovations are most apparent upstairs in the social house; for some of the best views of the harbour secure a seat on the balcony. The marble dining table is ideal for semi-private get-togethers.

“It’s about utilising the spaces better, especially upstairs where we’ve knocked out as many walls as we could,” says Justine Laundy from Laundy Hotels. The group purchased Woolwich Pier Hotel in 2015 for a reported $14 million.

Downstairs is the eatery, parlour (aka sports bar) and outdoor terrace, otherwise affectionately referred to as the “beer garden”.

Otherwise, take a share-plate approach by ordering a big bowl of mussels muddled with chilli, bacon, garlic butter, lemon crème fraiche and a baguette, or the gougère, choux pastry cheese puffs served with a mushroom “cappuccino”.

And because it’s a pub, there are also options such as the Sunday roast, and a chicken and leek pie with a golden, crunchy pastry top.

Wine drinkers will recognise labels such as Cloudy Bay, Four in Hand and Pikes, and fans of Nicholas Cage might like the Nicholas Sage, a spritz made with Tanqueray gin, sage, elderflower liqueur, lemon, prosecco and soda water.

You should definitely add the profiteroles to your order. Topped with chocolate sauce and pistachios, they are cut in half and served with a scoop of vanilla-bean ice-cream. May we suggest you get a couple and have a profiterole sandwich party.

This article first appeared on Broadsheet on November 15, 2018. Menu items may have changed since publication.