They worked with a renowned cheesemonger for the grilled cheese creations, and source cold cuts from LP’s Quality Meats for their not-so-humble newbie, the Hero Sandwich. 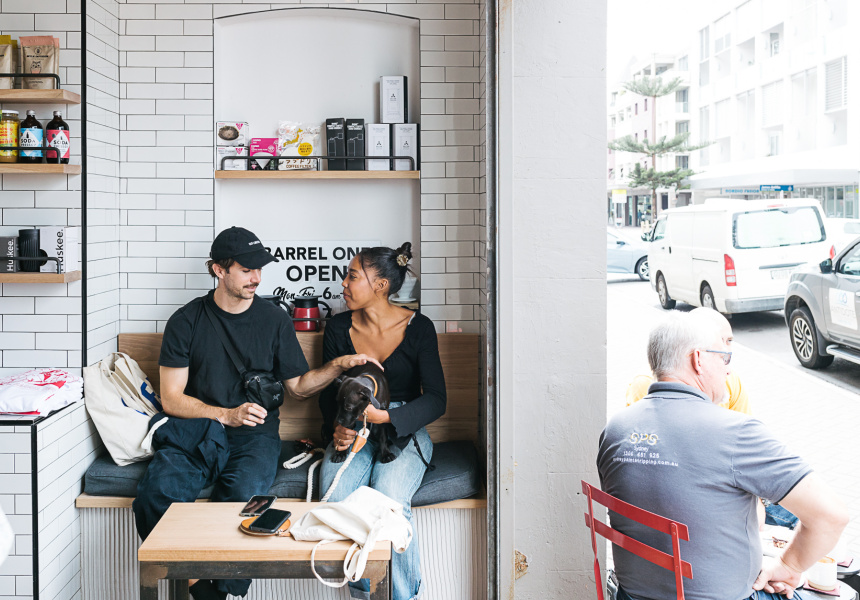 From a garage in Brookvale, Barrel One Coffee Roasters has been turning out some of the best Reubens, pastrami sandwiches, grilled cheese and bagels for nearly two years. Visitors of course also go for the beans on site and smooth coffee, but it’s the New York deli-style cuisine – inspired by a trip the owners Daniel Agapiou and Samuel Graham took to the Big Apple – that gives it edge in an otherwise avocado-heavy market.

Now Manly gets to experience the food at a second venue on East Esplanade, not too far from the ocean. It’s slightly brighter than the original (and a little more compact) and the crisp, white tiles and glossy, wooden floorboards are almost a counterpoint to the more industrial Brookvale warehouse space.

Like Brookvale, there are roller doors and a hanging baseball bat. Melbourne-based artist TJ Guzzardi made one for both venues, and also did the shop signage. Behind each counter is a striking black-and-white photograph.

“The one in Brookvale was shot by my best mate Luke Cameron on a coffee sourcing trip to Vanuatu. The shot is of Mt Yasur Volcano, the world’s most active accessible volcano. The Manly print was shot by his brother Andrew on the same trip. I thought it was nice to get both brothers in the cafes. Both are very talented photographers,” says Agapiou.

The menu features favourites from the Brookvale venue, including a generously layered pastrami sandwich, a traditional Reuben and a smoked-trout bagel. But there’s also an expanded range of grilled cheese sandwiches that have been created in collaboration with renowned cheesemonger Anthony Femia of Melbourne’s Maker & Monger. For the not-so-humble newbie, the Hero Sandwich, they source salami cotto and mortadella from Chippendale’s LP’s Quality Meats and layer the meats on top of provolone, marinated peppers and lettuce. It’s a spectacular “thanks-for-having-us” gift to the people of Manly, they say.

Working with decent local vendors has always been part of Barrel One’s philosophy, and they source produce from Pastrami Kings (which operates out of The Nook in Manly), Brooklyn Boy Bagels, Tothy Brothers Deli & Co, Staple Bread & Necessities, Butter Boy Bake and Butterbing.

Alongside refreshing, canned cold brew, and a serve-yourself filter to help commuters make their ferry on time, the cafe offers a range of blended and single-origin coffee roasted at their Brookvale warehouse. “We support farmer co-operatives and estates, which are self-sustaining,” says Agapiou. Helpful infographics on the bags of beans show you where each variety came from, and a little about the climate and terrain of the farm.

Agapiou says he and Barrel One have an affiliation with Manly and he’s wanted to open something in the area for a while. “I started my hospitality career in Manly, for many years tending bar before I moved into coffee,” he says. “Plus my first wholesale account for Barrel One was in Manly in 2012.”

Locals seem to be into the idea – the place is packed and it’s only been open for two weeks.