“We have this joke about dad never retiring. When he dies we'll stuff him and put him in the prosciutto room because he never wants to leave.” 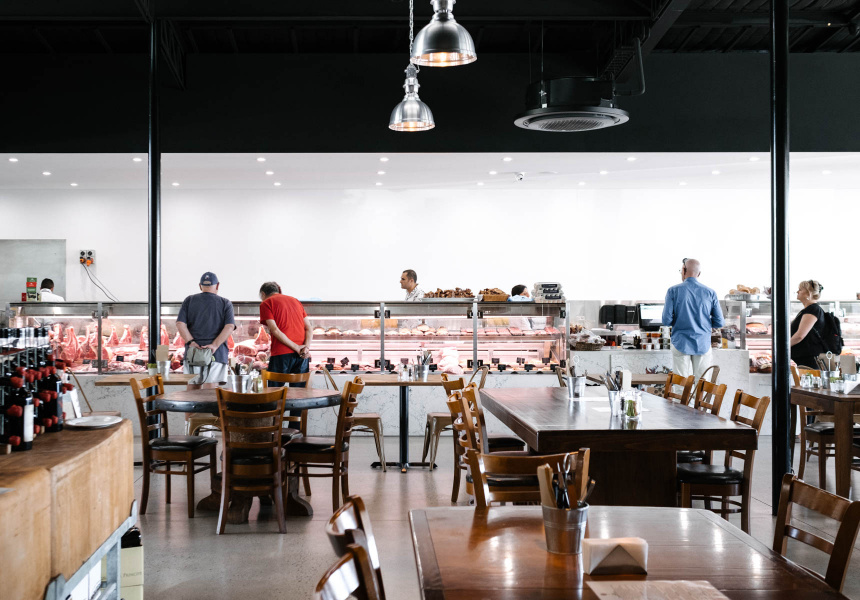 On Christmas Day in 2016 Carla Tomini Foresti, a member of the family behind Pino’s Dolce Vita Fine Foods, got a message on Facebook. It was one her regular customers. “The shop is on fire. I’ve called the fire engine,” they said.

When Carla and her family arrived at the scene the street was being cordoned off. They were able to pass just in time to see a fire engulf the butcher and deli. It was started by an electrical issue in the ceiling and smoke was everywhere. The fire lasted until Boxing Day morning, destroying almost everything. If anyone had been inside they would have died.

But that’s not the end of their story, and it’s far from the start either. The beginning is in 1978 when a young woman named Pia Coluccio was invited to Gattuso’s butchery in Mt Prichard, in Sydney’s south-west – one of the only places at the time to cut and prepare European-style meats. “I was born in the St George area; my family always used to trek to Mt Pritchard just to buy meat,” Pia says. “A friend of mine lived down the road from the butcher and her mum sent us to get some meat and [my friend] said, 'Let's all go, their nephew has arrived from Italy and he's really nice'. She really liked him. I feel a bit bad about that.”

The man she met was Pino Tomini Foresti, a young Calabrian butcher who’d recently arrived in Australia and was working with his uncles, who owned the Mt Pritchard shop. He came from seven generations of butchers and smallgoods makers, but that’s not the life he would have chosen for himself. “I wanted to go into the air force but my mum didn’t want me to, she was scared of planes. She said, ‘Why don’t you go to Australia for six months’.” It worked: Pino never applied for the Accademia Aeronautica, Italy’s military flight training school.

In 1977 Pia and Pino married and when they returned from their honeymoon (to Italy of course) the pair opened Pino’s Dolce Vita Fine Foods in Kogarah, about 14 kilometres south of the city.

“It was very scary because back then it was very different,” says Pia. “It was just a butcher; it was a very sad little shop.”

Pino describes it more glowingly, but he admits it was hard. “I used to start at 4am and finish at 11pm.”

Pino did all the butchering and made all his own charcuterie, just as he’d learnt from his uncles in Mt Pritchard and his family in Calabria. But Kogarah wasn’t a suburb with a big European population and the locals didn’t understand what he was doing. “The Aussies used to come in and say, ‘What's that? Wog tucker? Are you gonna eat that? Yuck what's wrong with you’. Some people would come in the door, look inside and say ‘You’re a wog. We don't buy from wogs’.”

For the first six months Pino worked as a waiter at night to cover the cost of the shop’s rent. As well as helping him in the butcher, Pia also worked as a medical secretary. Their luck changed when the South American and wider European community caught on there was a butcher in Kogarah related to the Gattuso brothers that might also be able to make the meats they were looking for. “I started to learn Spanish, and I learnt how to do all the South American and Portuguese cuts of meat,” Pino says.

By the time the fire hit in 2016, Pino and his family – his two sons, Marco and Fabiano, and his daughter Carla also work with him and Pia – were making and selling an extraordinary range of cold cuts, sausages, fresh meat and deli goods, and they had become extremely well known for it.

Their prosciutto, ’nduja and salami had made its way onto the menus of great Sydney restaurants, and the European and South American community had embraced them for producing charcuterie the old-fashioned way, without preservatives, flavour enhancers, colour or anything else you wouldn’t find in a small Calabrian town in the 1970s. “I grew up with this. It's natural. This isn't a new thing, it goes back seven generations,” says Pino.

When the shop was destroyed Pino was devastated. “I don’t really want to go back [to that time],” says Pino, “It hurts me. I was praying to God [the shop] would open again. It’s what I knew, what I wanted to do. I missed the people.”

But when the family met to decide what to do after the fire, reopening the shop wasn’t necessarily on the cards. The wholesale business they’d set up in the interim was doing well. “Dad was pushing to open the shop again but we were all saying no, we didn’t want to,” says Carla. “We were ready not to do retail again; we were over it – we’d had a hard Christmas that year.”

It wasn’t just her dad who wanted a new shop – Carla says people stopped her in the supermarket. “We didn’t have the heart to tell them,” she says.

In the end Pino and his customers won. Late last year the deli and butchery reopened, but not like it was before, and nothing like the humble butchery that was there in 1978. Pino’s 2.0 has an area you can sit down in for a salami and cheese panini and an espresso, or a wine and a Fiorentina-style steak.

The mortadella, guanciale and culatello Pino and his family made in the past are still available and unchanged, so are the South American chorizos and asado cuts. But now there’s also takeaway rigatoni, lasagna, cakes made by Carla, a cheese fridge, and an exclusive selection of wines, oils and vinegars Pia and Pino import from Italy. You can even learn how to make some of it at their cooking school.

“I never thought this would happen,” says Pino. “I did it with my family. If I didn't have them, especially my wife, my sons and daughter, I don't think I would have been able to do this. I just wanted a normal simple life, like everyone does.”

So what does the next 10 years of Pino’s Dolce Vita Fine Foods look like? Neither Pia nor Pino knows, but Carla says the one sure thing is that Pino is never retiring. “We always have this joke about dad never retiring. When he dies we'll stuff him and put him in the prosciutto room because he never wants to leave. In his mind, if he isn't here, it doesn't go well.”