In the lead up to Father’s Day this year, we’re quizzing some creative Sydney dads about life with their little ones. For chef Dan Pepperell, “Introducing new food to Marlo is the most fun thing ever.” 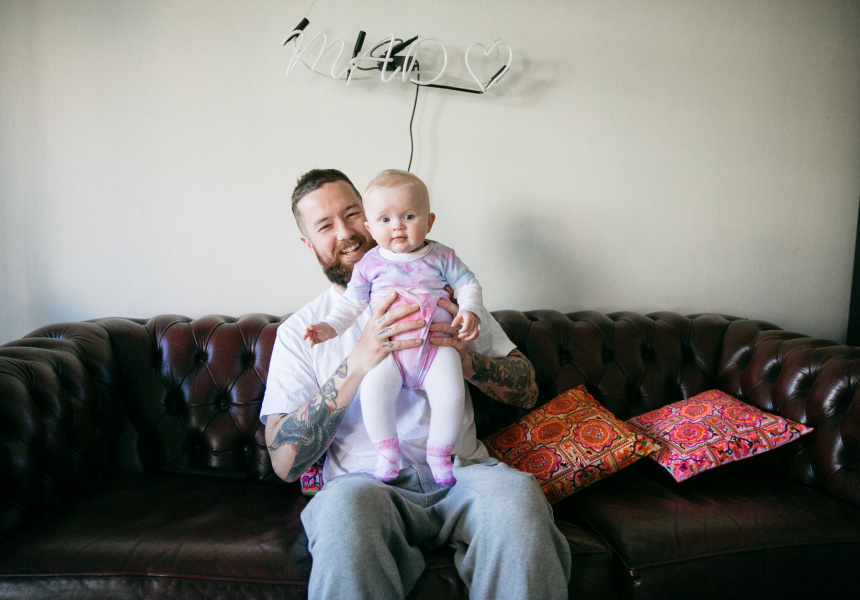 It’s been a big few months for chef Dan Pepperell. Not only has he announced his departure from 10 William Street to join the Swillhouse crew in a new CBD dining venture opening later this year, but he and fiancée Ash Killeen had their first child, Marlo.

Broadsheet: Tell us about Marlo, what's she like?
Dan Pepperell: Marlo is the cutest little crazy person I've ever met. She's a bit like me when she's chilling out watching 'In the Night Garden and a bit like her mum when she's squealing.

BS: How has your work life changed since she was born?
DP: Work is pretty much the same except I get a lot more photos and FaceTime from Marlo and Ash. I work just as hard so that my girls can have an awesome life. I love coming home after a shift and walking into her room and seeing her little face. It feels like she changes every time I see her. Sunday is even better now that Marlo is here.

BS: Does Marlo come into the restaurant often?
DP: She came in a few weeks ago and loved it and then lost it when we were leaving. I think she was sad she didn't get to try the spaghetti. She's also always in the kitchen via FaceTime.

BS: How has your personal life changed since she was born?
DP: I don't rage as much, and time spent with Ash is a lot more chilled out which is nice. Ash gets drunk after one glass of wine now, which is cost effective. Before Marlo I'd never changed a nappy so I know a lot more about baby poo than I did before.

BS: Do you know many other chefs who are fathers? Did they give you any advice? DP: Yeah, most of the dads just advised getting as much sleep as possible now, which I wish I could have banked. Pretty much all the chef-dads I know have daughters, there are a lot of theories going round as to why this is. My theory is high salt intake. I’m sure we will be swapping advice on how to deal with teenage girls in the near future.

BS: Will you try to introduce her to adventurous foods?
DS: Introducing new food to her is the most fun thing ever. Her expressions are priceless. So far sweet potato is the biggest hit. The antipasti platter didn't go down too well.

BS: Has anything surprised you about becoming a dad?
DP: It's amazing how the smallest things she does are so awesome, even if they could seem insignificant to someone else. She started waving the other day and saying something that resembled “'Dada”' so that pretty much made my year.

BS: How are you spending your first father's day this year?
DP: Ash might have to answer that one!

BS: What's your best piece of advice for new dads with daughters?
DP: Daughter or son, I would say embrace the change, enjoy the ride and support the baby mumma as best as you can.