Experiments in Street Food at the Shangri-La

One of the most impressive things at this restaurant is Bo Sørensen’s ice-cream chicken. 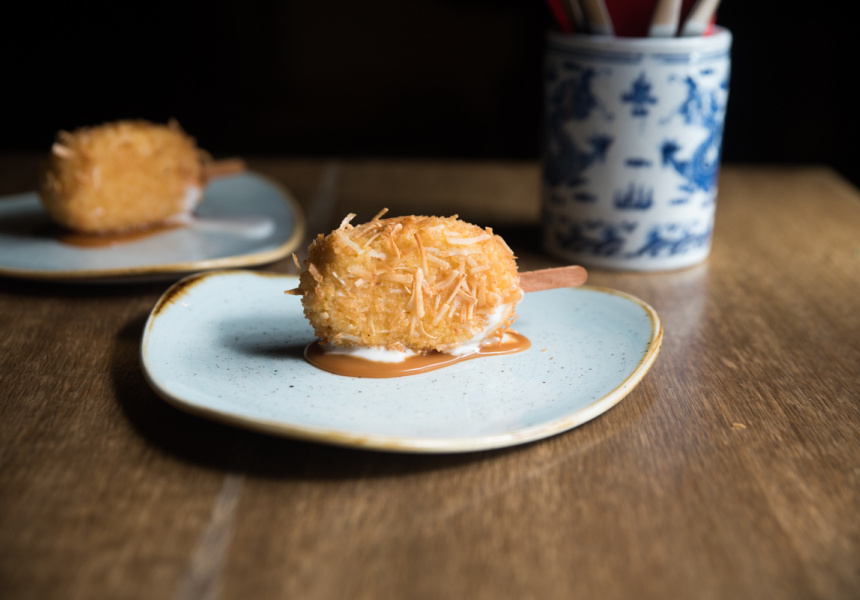 It’s exciting to watch someone passionate about their craft get experimental. When the Shangri-La decided to overhaul Café Mix, it put Bo Sørensen (previously at Greenhouse Al Muntaha and Altitude) in charge. The result is Shayan Quarter, an interactive mix of Asian street-food and fine-dining technique.

Forget about the buffet and pick dishes off Sørensen’s innovative menu. “I’m not authentic, but I don't want to be. If you want authentic you go down to Chinatown.”

He serves deep-fried bao buns baoger style with master stock-poached pork belly and garlic chips. Shake it chicken is a riff on Sørensen’s childhood memories of McDonalds in Hong Kong. Based on Shakin' Flavour Fries, the chicken wings come crisply fried in a bag with a side bowl of Szechuan chili salt. Orders are to dump a whole load of seasoning in the bag and shake that sucker until everything’s coated in mouth-numbing joy. It’s playful, precise and entirely representative of both Sørensen’s technique and his taste for the theatrical. “Stephen (Krasiki, executive chef at Shangri-La) has given me that leeway so I can really experiment.”

Although it’s got a working menu, Shayan Quarter doesn’t officially open until its renovation finishes in January. That means for the next six months, Sørensen will also be using his kitchen as a playground to test some of his more unusual ideas. His most recent concoction is ice cream-styled chicken. It looks like a spruced-up magnum, but it’s pure poultry. In the centre is confit Girraween leg. Wrapped around that is a larb-like Thai-spiced chicken mince, and on the outside, there is a crispy skin with the occasional dab of Sørensen’s mayo or Sriracha. It’s perplexing but also hugely enjoyable, certainly an original dish in Sydney.

Sørensen says the chicken-pop (he’s taking suggestions for a new name) is his Adam and Eve. The chicken-pop hasn’t migrated to the menu yet, so make sure to ask for it, and while you’re at it, order a Mamacini. It’s a giant arancini ball packed with tomato and cumin-braised goat, brie and cheddar that’s then doused in garlic-chip strands and a viscous garlic aioli. It’s intense, distinct and odd, kind of like something you’d make by accident if your fridge were filled with produce from an incredible deli.