The business hub gets an exciting all-day newbie, taking you from breakfast to after-work cocktails and oysters. There’s been an exciting flurry of new North Sydney eateries the past six months. There’s Lobby Boy in the basement of Northpoint Tower, from the team behind The Grounds of Alexandria, as well as rooftop restaurant and bar Green Moustache and cafe Glory Days. The latter opened a few months ago at 100 Mount Street, and now the same team brings us a more upmarket dining experience, Glorietta.

The Italian eatery is upstairs in the same building as Glory Days, serving breakfast, lunch and dinner Monday to Friday.

Owner Aaron Crinis’s (previously Diggies Cafe and Dagwood Bar + Kitchen in Wollongong) first recruit for the smart, generously sized venue was head chef Kate Morris. A former apprentice at one of his venues, she also worked at renowned fine diner Tetsuya’s, as well as Sonoma Bakery and Coogee Pavilion. Crinis grew up at Sydney’s fruit markets, working with his father to deliver fresh produce to local restaurants, and says he and Morris share a love for seasonal ingredients. “We want the menu to move with the produce and highlight some great locally driven stuff, so it will be continually evolving,” he says.

On the menu at the moment you’ll find pan-fried squid with burnt shallot oil, bottarga (cured fish roe) and charred sourdough, as well as a spicy vodka paccheri (large tubular pasta). The fish is what’s available from the market, served with burnt lemon and caramelised tahini mayo, and you can get oysters freshly shucked. There are pastries and coffee for breakfast, and at lunch there are burgers, too.

Glorietta’s pizza chef is Mauro Grecco, formerly of fun CBD pizzeria and live-music venue Frankie’s). While that place is more of a by-the-slice joint, here you order whole pizzas. “The fermentation process takes up to four days and [the base] is light and crisp,” says Crinis.

The venue includes a number of outdoor tables, which are perfect for a drink after work, and the booze list swings between cocktails and vino. General manager Freddie Slater – previously a sommelier for Bentley Restaurant Group (Bentley Restaurant & Bar, Cirrus, Monopole and Yellow), which is known for its innovative wine lists – has curated a savvy, extensive list of drops from across the globe. Crinis’s brother-in-law, Ben Fitzgerald (who currently manages New York’s Soho House) has chipped in as bar consultant. If you’re a fan of Negronis, you’re in luck – there are six available (including a Negroni Bianco using Four Pillars Rare Dry Gin, Cap Mattei and Oscar 697 vermouth).

Although the weekday-only venue is on the ground level of an office building, it’s got lots of warmth and texture thanks to the design team at Alexander & Co (The Woolwich Pier Hotel, Tilly May’s). One thing’s for sure: this newbie makes a strong case for hanging around the office after hours. 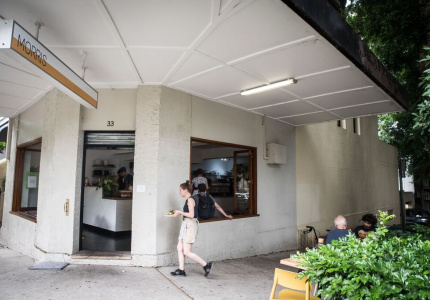