If you’ve ever found yourself out in the wee hours in the inner west, you’ve likely got a story from famous Sydney venue and LGBTQ stalwart Sly Fox. There’s a new team in charge now, and while it’s hoping the Enmore Road bar continues to be a classic late-night venue, it’s also expanding its vision of what the venue can be (and revamping the name to the ever-so-slightly slicker Slyfox).

“We want to evolve the Slyfox … into a venue where people can come and enjoy the space, the music and the food at any time of day,” says Brett Strauss, the co-owner of The Chippo Hotel who’s now running the bar with Kerry Wallace (best known as the mastermind of underground house-music event SASH) and Benjamin Lepke.

It’s brought in communal tables because Strauss believes in the power of connection (“we want to encourage conversation”) and sees Slyfox as a place for people meet, whether it’s on the dance floor or over a beigel.

And many beigels there will be. Slyfox is now home to London’s famous Salt Beef Beigels, which Wallace has dreamed of bringing to Australia for 10 years.

For those who aren’t familiar: Brick Lane Beigel Bake is to London what Katz’s Deli is to New York (“beigel” is the more common spelling of bagel in England). Wallace, an ex-chef, worked closely with the East End venue for two months to perfect the recipe to serve in Sydney. He settled on beef slow-cooked for 17 hours in a water bath of 86.5 degrees to get the most succulent tasting brisket. The salt beef is then served with pickle and mustard and whacked in a bagel from Jesse’s Bakery. There’s also a vegetarian option with chickpea-crusted cauliflower. Beigels come with waffle fries and your choice of sauce (choose from a range of options, including confit garlic aioli, smoky barbeque, chip shop curry and toasted cumin and lemon aioli) for $16.

On the nights Slyfox doesn’t sell out, it’ll be taking the leftovers to homeless shelters nearby. “We’ve got it pretty good and we want to give back to the community,” says Strauss, who adds that diners will also be able to buy a beigel for the homeless for $5 and all proceeds (and beigels) will go to charity.

This article first appeared on Broadsheet on May 22, 2019. Menu items may have changed since publication. 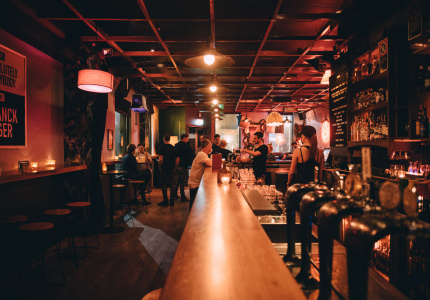