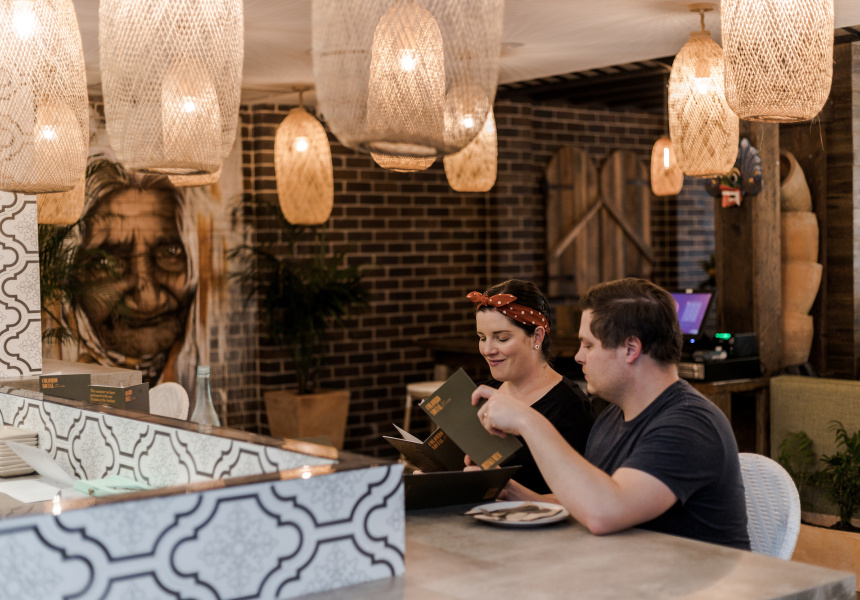 Sydney is a fan of Sri Lankan food. In the inner city, there’s the recently opened hawker-style Hopper Kadé, the food-stall-turned-eatery Lankan Filling Station and upscale Indu. Head to Toongabbie, in Sydney’s west, and there are a number of places, including takeaway joint X Dreams and Sri Lankan Street Food (its inner-city offshoot Dish is in Glebe).

Now Colombo Social, a newbie in Enmore, is here. But it’s doing things a little differently. The menu highlights the complexity of the cuisine through traditional home-style cooking and a more fusion-styled menu, but something else sets it apart: it’s a social enterprise helping asylum seekers and refugees.

“We have four asylum seekers on the books at the moment out of nine staff, and we’re hoping to have one more come on board next week to give us five out of 10,” says co-owner Peter Jones-Best, who started the business with close friend Shaun Christie-David, who was born in Australia to Sri Lankan-migrant parents.

Colombo Social works with refugee-support agency Settlement Services International, the Asylum Seeker Centre in Newtown and the SkillMe program, to recruit recently-arrived asylum seekers and refugees to work in the kitchen or front of house.

The goal is to help them transition smoothly to life in Australia, acquiring skills they can use to find other employment later on. Colombo Social also makes sure their partner agencies are able to provide ongoing mental health support to the workers, both before they’re hired and while they’re working.

Colombo Social is inspired by Christie-David’s parents – his Mum Shiranie in particular – and by their move to Australia 35 years ago in search of a better life. It’s only fitting then the restaurant serves the cuisine of their homeland.

Head chef Chamara Pathiranage, who hails from Sri Lanka’s largest city Colombo, has designed a menu in two parts: the first features a modern fusion of Australian classics with traditional Sri Lankan favours, while the other is home-style cooking.

But fusion abounds: soft-shell crab is coated in spices and deep-fried and put in tacos made of roti bread instead of tortilla, with mango salsa, fried curry leaves, sambal and desiccated coconut on top. There’s also a vegetarian bahji (similar to a fritter) of beetroot and caramelised onion served with a coconut yoghurt raita, a dipping sauce blended with herbs and mint.

For the more traditional menu, Shiranie has shared her family recipes: curry gravy, vegan dhal and vegetable curry. (They’re flagged on the menus as “Amma’s”, or “mum” in Sinhala and Tamil, Sri Lanka’s official languages.) “[The staff] all call her amma too; it’s an interesting dynamic having her in the kitchen, but it’s been so lovely.”

Shiranie and Jones-Best’s mother Jenny are two of the many women who’ve inspired and supported the venture. Sydney artist DC Willans has created a mural of a Sri Lankan woman with a strong gaze but soft eyes. It isn’t based on anyone in particular – just a familiar and universal face. “That's everyone’s amma on the wall – a strong, Sri Lankan lady that's a tribute to all the women who've inspired us,” Jones-Best says.

The colours and tones of the Sri Lankan landscape form the space’s palette. There are woven light shades, teal banquette seating, lush greenery and stacked terracotta pots to break the room into sections.

The spicy, fruity cocktails are also inspired by the South Asian country, with ginger, coconut, mango, cardamom and turmeric featuring. The Lankan Love Affair, for example, is made with Ceylon Arrack (a fermented coconut spirit), Brookie’s Macadamia Gin, lemon, ginger and cardamom syrup.

“Sri Lanka is really one of the most fusion places out there,” Christie-David says. “There's influence from the Portuguese, the Dutch, the British, the Indian, the Malay, the Chinese – they've all come in and brought their influence into this unique cuisine.”