Old-school inner-west pub culture has been propelled into the 21st century. There’s now craft beer sitting alongside Reschs and Tooheys Old, and plans to restore the pub’s upstairs accommodation. 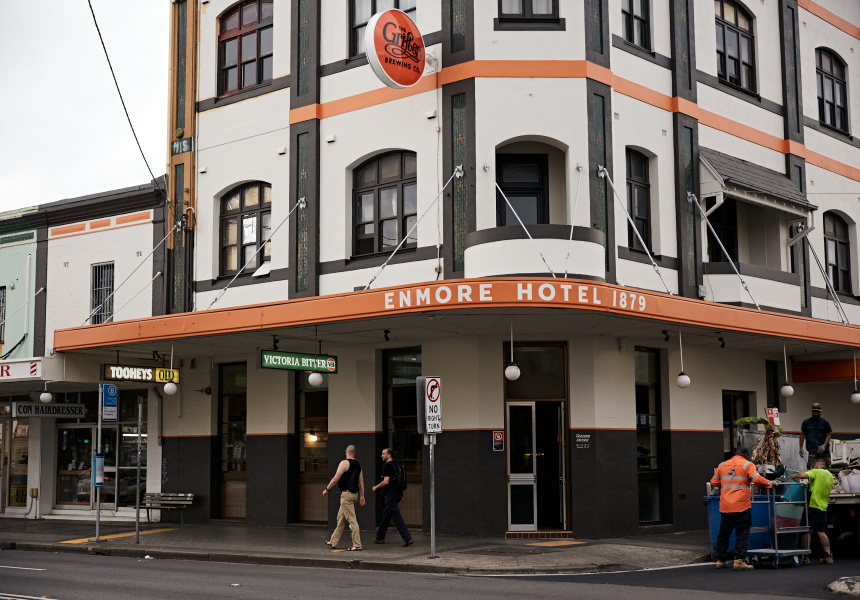 The nostalgic clatter of a break shot on green felt is something you’ll hear most nights at the Enmore Hotel. The compact corner pub recently opened on the bustling stretch between Stanmore Road and the King Street junction, in the three-storey Victorian building that once housed legendary nightlife spot the Sly Fox, which closed in January.

“The pool table was a big thing for us, because it made everyone feel like they were back at the pub again,” says licensee Brigette Jakobsen who, together with owner and “pub doctor” Ged Dore (The Salisbury Hotel, The Henson), snapped up the site’s whopping lease in February, just weeks before lockdown. In the quiet months that followed they worked hard to restore it to its former glory as a quintessential inner-west boozer.

“If you have a look at some of the old pictures of The Henson, the Sydney Park Hotel and even the Golden Barley, they’re a similar style to what we’ve done here,” Jakobsen says of the pub’s classy interior revamp, led by designer Lucia Braham. “The only difference is, back then, they were very much a men’s drinking hole. So a lot of those [photos] are full of dudes drinking beers and the girls would have their own drinking section. What we like to say is, this is a ’70s pub for today’s community.”

You can tell they’ve nailed the brief just by looking at the eclectic range of beers pouring at the wraparound bar, which has a marble top, classic tiling and silver trim. Reschs, VB and Tooheys Old are tapped proudly between local makers such as Philter and Grifter Brewing Co, both down the hill in Marrickville. Chilled tins of Melbourne Bitter and Young Henrys glisten side by side in the fridge.

Pull up a stool at the bar, or take a seat in the sunlit public bar. It’s fitted with orange chenille high-top seats and banquettes punctuated by tall windows looking out to Enmore Road. There’s an AC/DC pinball machine and a jukebox glowing where the pokies used to be (they’ve been banished to the back of the venue) and – if you’ve come to watch the footy – there’s a dedicated sports section with screens and a grandstand for the full viewing experience.

Comparing the hotel’s “before and after” appeal is hard to avoid given its late-trading licence (the bone of contention that ultimately ended the last tenant’s three-decade reign). It’s a perfect spot to loosen up or wind down either side of a meal if dining at one of the suburb’s eateries, or if you’re catching a show at Enmore Theatre once gigs resume. And while the pub has no bistro, there’s a hotbox behind the bar loaded with proper London-style pies, delivered daily by Stanmore’s Hardcore Pies. There’s a free-range chicken pie, a slow-cooked beer and beef number, and always something for the veg crowd.

Jakobsen says there are long-term plans to revitalise the venue’s 13 hotel rooms upstairs, but until then it’s all about the pies, pool table and other simple pleasures.

“Having people walk past in the morning, peeking through the windows and giving us the thumbs up – it’s just so good to be involved in Enmore,” she says. “At this point, if some old guy walks in and orders a middy of Reschs, I’ll be happy.” 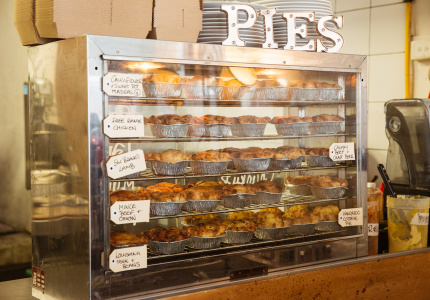