Quality wine for $2, mini-Martinis for $5 and regular-sized Negronis for $10. There’s no excuse not to brave the cold this winter with these killer deals. 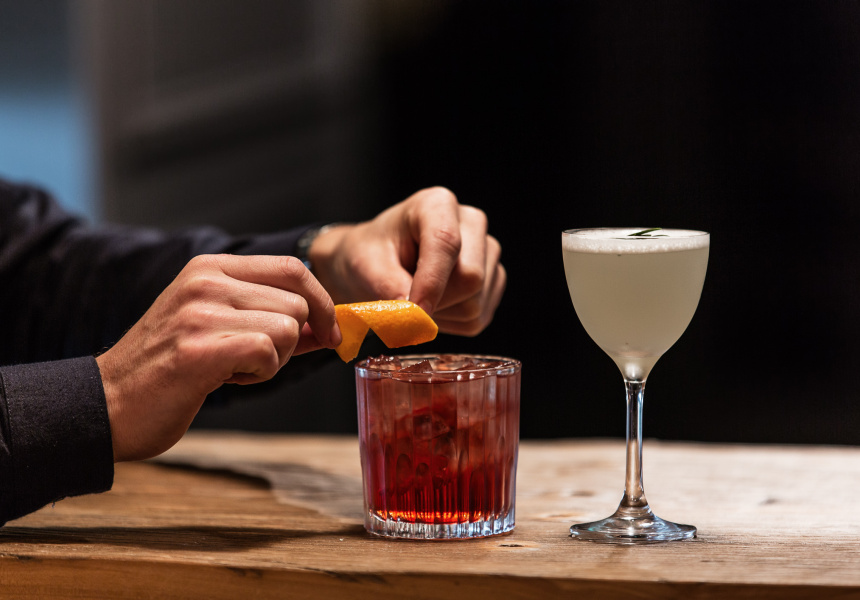 We’re currently living in a time of great change: Sydney now has its first driverless metro, avocados that weigh more than a kilogram are a thing, and some of our favourite restaurants have shut up shop. But we’re fairly certain the humble happy hour will be sticking around a good while longer – and Sydney has plenty of those to enjoy. From $2 glasses of wine we actually want to drink to $10 Negronis, we’re celebrating the cheaper – but still great-quality – side of this often expensive city.

The George
Waterloo’s The George Hotel opened to much fanfare earlier this year, with tacos from Ghostboy Cantina’s Toby Wilson and natural wine from minimal-intervention wine store DRNKS. If you needed more of an excuse to get down there, from 6pm every Tuesday it’s doing $3 tacos al pastor – fresh house-made corn tortillas piled with pork neck marinated in a house-made adobo sauce, cooked slowly on a spit (the “pastor”) and shaved to order like a kebab. Drinks-wise, every Monday there’ll be Hawke’s beers for $5, $10 Negronis and no corkage on wine bought on-site at DRNKS and consumed in-house. Every Thursday you can get jugs of Young Henrys for $15, glasses of orange (skin-contact) wine for $5, plus there’ll be a raffle to win 10 tacos. On Sundays, expect $25 jugs of Agua Fresca (fruity) cocktails.

Shady Pines
Shady Pines calls its happy-hour deal “world famous”, and while we can't quite attest to the veracity of that Trumpian claim, we will admit it’s solid. From 4pm to 6pm, seven days a week, dodge the peanut shells on Shady Pines’s floor to get to the bar, where you'll find $4 house spirits, house wines and beer, and perfectly balanced $10 Margaritas.

Black Bottle
European bar Black Bottle in Darlinghurst does happy hour better than most. From Wednesday to Friday, between 5pm and 7pm you’ll get $1.50 oysters and $10 Negronis and spritzes. But better yet, on Thursdays from 5pm until sold out, it pours $2 glasses of wine as part of its aperitivo special. This isn’t cheap wine, though – it’s quality vino owner Lucas Cristofle has managed to get a good deal on via his contacts. Even he doesn’t know what the drop will be each week, but he recommends getting in nice and early so you don’t miss out.

Maybe Sammy
One of our favourite things about this hotel-bar-inspired bar is its half-pour cocktails. They require only half the boozy commitment as regular-pour cocktails, and, accordingly, are half the price. While they’re usually excellent value at just $10, from 4.30pm to 5.30pm Tuesday to Saturday half-pour Martinis, Negronis and Irish coffees are half-price again – so just $5. No maybes about it, we’re definitely on board.

Spritz Bar
Newish Chippendale rooftop bar Spritz Bar is enticing drinkers with a happy-hour deal that makes sitting atop a roof in winter more appealing. Aperol Spritzes and Espresso Martinis are a heart-warming $10, and spritz jugs are just $20. The happy hour runs from 5pm to 7pm Tuesday to Thursday; 5pm to 6pm on Friday and Saturday; and, best yet, from 4pm till close on Mondays.

The Duke
Enmore’s The Duke is run by the same team as The George, and it hasn’t missed out on the happy-hour love. Every Thursday it’s flogging tinnies and glasses of skin-contact wine for $6. These wallet-friendly drinks are served alongside a menu of “good pub food”, as co-owner James Wirth described it to Broadsheet when it opened. That includes cold-cut meats from Chippendale’s LP’s Quality Meats and 400-gram dry-aged sirloin – it’ll truly be a high-low experience.

Lord Gladstone
Chippendale favourite The Lord Gladstone may have new owners, but it’s still appealing to its regulars by putting on a damn good happy hour from 5pm to 7pm Monday to Thursday. Snap up $5 house wines and tap beer and $10 cocktails. Plus, on Fridays it has its “good keg” deal. From 5pm the bar taps a keg, you pay what you feel, and all the money goes to charity.

Restaurant Hubert
This early-20th-century-inspired French bistro will help you forget it’s 2019 – and its aperitif hour, from 4pm to 6pm Monday to Saturday, might even help you forget what day it is. With $10 Negronis and $5 G&Ts, house wines, Dubonnet highballs, Genmaishu sake and Manzanilla sherry, you’ll (almost) be paying 1914 prices in the 21st century. Food-wise, Hubert does croque monsieurs for $5 and Normandy burgers for $10.

Balcon by Tapavino
Like Black Bottle, Spanish restaurant Tapavino’s younger sibling brings European flair to Sydney. It was opened so Tapavino’s owner, Frank Dilernia, would have somewhere to store all the wines he was importing – Balcon houses more than 500 bottles of Spanish vino in its cellar. Its happy hour, available Monday to Friday from 3.30pm until 6pm, is bloody good value for a CBD diner. There’s $5 beer on tap, $8 glasses of sangria, and $10 Aperol Spritzes, Negronis and Margaritas. Salud.

The Clare Bar
The folks behind A1 Canteen are hoping to get Sydneysiders out of hibernation: you’ll score a bowl of pasta and a glass of minimum-intervention wine for $30 until August 31. 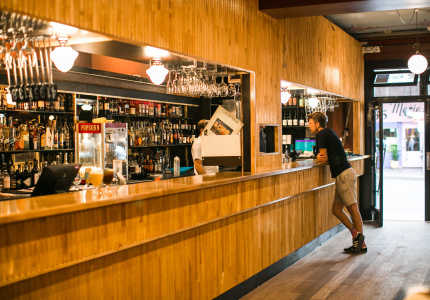