Merimbula’s newest bar has burgers, oysters and insight from the Swillhouse group. 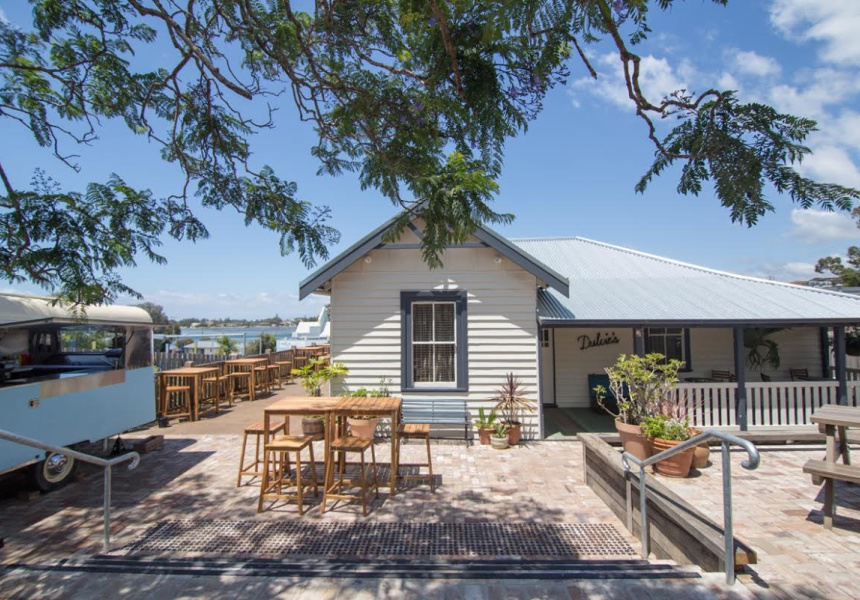 While the original plan was for Dulcie’s Cottage to open at the start of the year, approval delays and licensing meant that business partners (and high-school friends) Kirsty Pongratz and Mitchell Nadin couldn’t open – until now, right in time for summer.

“We had a very ambitious timeline,” says Pongratz. “The silver lining was that we really got to take our time with the design process and consider all aspects of it.”

It has been open for less than a week, but Dulcie’s has already attracted locals and visitors with its short-and-sweet menu and eclectic aesthetic (postcards, vintage photographs and a deer head or two). The bar – featuring a lengthy menu of cocktails; white and red wine; and beer offerings, local and imported – is inside the house. Food is served from a baby-blue Airstream-esque food truck outside. Dan Pepperell (previously of 10 William Street, but currently heading up the kitchen at Hubert with Pongratz’s husband, Jason Scott of the Swillhouse hospitality group), had a hand in executing Pongratz and Nadin’s vision for their menu.

“We were in a really lucky position – we could borrow Dan and get his two cents,” says Pongratz. “We wanted a simple and delicious menu.”

There’s a prawn roll topped with prawn-head mayo; local Merimbula oysters served by the half-dozen with seaweed asparagus (more commonly known as samphire); and four varieties of burger, some with buttermilk fried chicken, some with smoked speck or ground beef, or field mushrooms and pickled daikon. Pepperell will remain at the location until the end of the week, and then head chef Zac Hidding (who has been involved from the start) will take over again.

“Merimbula used to be really popular, and we want to bring that back,” says Pongratz. “We want it to be a real destination again, rather than a stop over.”

The restaurant fills a gap in the community’s market, says Pongratz: any time, all-the-time, casual eats.

Pongratz says, “Because the town is so seasonal, the locals aren’t really used to something being open all hours of the day. We just really want to be here and be reliable, so if someone wants a drink or a burger or a cup of coffee, they can get it.”