Drink with the Season

How a new wave of cocktail makers is working with the Australian seasons. Restaurants and cafes are choosing their menus to reflect the seasons. More than we have been in decades, we’re aware of when tomatoes are at their best, and when the price of a mango includes its flight over.

Seasonality is also creeping into our bars. “I think we are seeing more bars wake up to the environmental impact of what we use, and at the same time finding ways to adapt classic recipes by using more economical and waste-free methods,” says Oscar Eastman, ex-Eau de Vie barman and current cocktail master at Melbourne’s Loretta's Bar & Bluebonnet Barbecue.

Like many of Australia’s top bartenders, Eastman no longer relies on a set menu of staples. Instead, his cocktails bend to the will of the Australian environment. “One of the greatest advantages of committing to a seasonal menu is that you can really reflect what's going on outside of the bar,” he says. “I think this is a really powerful part of the experience.”

Another produce-driven barman is Andrea Gualdi of Sydney’s Maybe Frank. “Seasonality affects cocktail design a lot,” he says. While there are some cocktails that won’t change (such as Negronis, Manhattans and Martinis), most should reflect the season. In the past he has made a summer drink with Tanqueray gin and fresh capsicum juice; and one with Don Julio Reposado tequila and fresh pineapple juice. “If you want the best product you have to look for the ingredients at the right time,” he says.

Knowing what produce is seasonal also means knowing how flavours and textures evolve over the year, says Eastman. “Early harvests for fruits such as mangos or apples tend to give you a stringency and acidity, which can work well as a balancing agent or flavour in a drink that would otherwise need citrus to balance it,” he says. Eastman says spring is a brilliant time for any savvy cocktail maker. “Berries, flowers and herbs come to life, as well as some of the beautiful native botanicals.” He describes a seasonal cocktail he makes called the M-exit Cobbler, with desert lime-infused rye whiskey, homemade cumquat brandy, sherry and local honey. For Gauldi, summer is a time to experiment with berries, apricots and melons. “That’s when they’re at their most delicious,” he says.

While not every bar is about seasonality (due to the desire to appease every drinker), Eastman and Gauldi agree the best thing for the future of the bar scene is for all bars and bartenders to work with their locality and environment. “I think seasonality should be embraced by every bar, especially in such a fertile country with so much inspiring, interesting native and local ingredients,” says Eastman.

Make this recipe at home.

Method
Combine all the ingredients in a cocktail shaker. Shake and double strain into a frozen coupette. 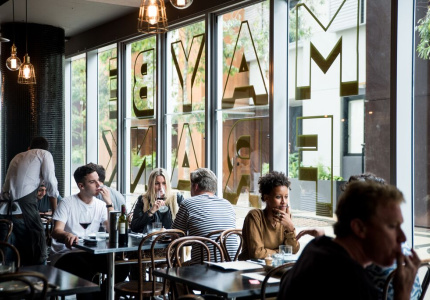