Set in a basement just a short hop down from the Coke sign, Old Growler is a new venue from Jack Brown of Ching-a-lings and Alexander Watts and Nick Watney from Runcible Spoon. Put simply, it’s anything but a normal beer barn.

Descend the stairs and you'll first notice exposed brick, exposed concrete and exposed archways. The bar's front and centre and you'll be hard pressed to walk by it without pulling up a stool. But you should, because beyond it, the room is even more pleasant. Big comfy booths sit alongside lengthy communal tables topped with pretty white flower arrangements, with everything lit up by a stunning tangle of light bulbs dangling from the ceiling.

Newtown brewer Young Henrys has the exclusive beer supply rights, so try its Hop, Natural or Real ales by the half or full pint. There's also a cloudy cider and a revolving tap for seasonal brews. Bottled beers include Coopers Light, Murray's Punch and Judy's Ale and Southwark Old Stout. The cocktail menu has standards like Negronis and Aperol Spritzs, as well as some not-so-standards like the Hopscotch Henry (a mix of whiskey infused with topaz hops, maple syrup and lemon, topped with Young Henry's Special Ale).

If the beer's getting to you, settle your stomach with starters like beer bread or a bowl of salty pork scratchings. If that doesn't work, opt for the chicken liver paté with sherry; quail with tahini, parsley and currants; or the pork belly with pickled slaw and apple sauce. It's all hearty and it all goes down very well with a pint in hand.

So folks, it's time to get your beer-drinking boots on and step away from the glare of the Darlinghurst Road strip. There was little to commend this stretch of pavement previously, but Old Growler's changed all that. It’s time for a pint. Or several. 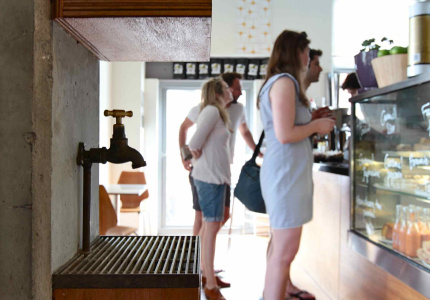