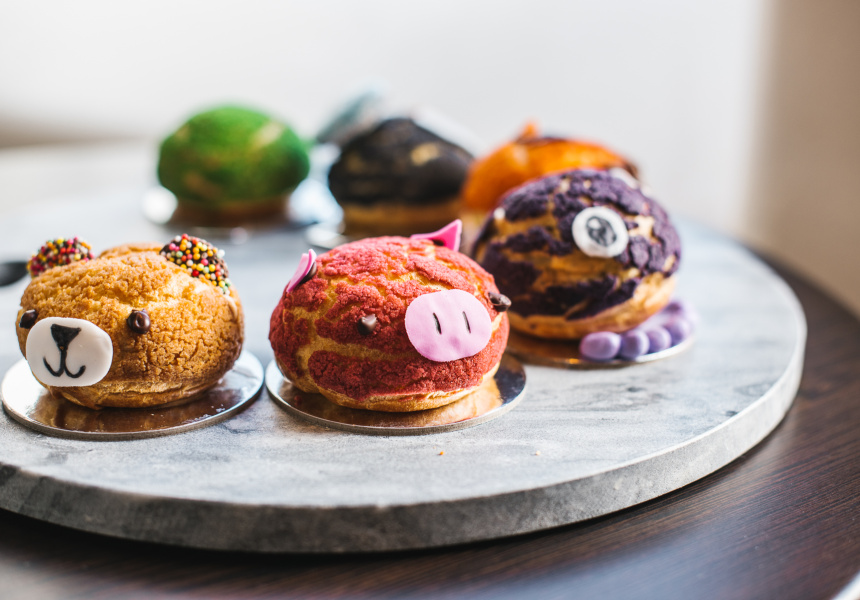 Every morning Carol Chung and Kevin Phan wake up early to bake a fresh batch of their animal-cookie puffs. Everyday they invariably sell out. Demand for the pastries is so high they have stopped serving all other food items on the menu at their cafe, Doux Amour (they still serve coffee and tea). The popularity could be chalked up to how good the cookies look on Instagram, but there’s more to the dessert.

“They’re a choux pastry similar to éclairs and profiteroles. They’ve got a custard cream which is lighter, and a cookie crumb on top,” says Chung. They’re available in six flavours, each characterised by an animal: Blackie the black-sesame penguin; Nutty the Nutella bear; Macho the green-tea turtle; Rosie the rose-and-lychee pig; Chai-ger the chai tiger; and O-be the taro octopus.

Chung has more than 12 characters she’d like to roll out depending on the season and time. “We picked the flavours based on what we like and what the general public would like, and then what animals go with the colours,” says Chung. “We tried to make it as light as we could, and the flavour stronger, so you can eat a bit more.”

Chung and Phan started baking as a hobby before friends convinced them to start supplying their creations for weddings and events. “We started out doing macarons back in 2012; we tried making them and failed miserably,” says Phan. After eventually mastering the macaron, the bakers ventured into éclairs, tarts and other sweets, but admit nothing has been as popular as the animal-cookie puffs.

“We make as much as our equipment allows us to,” says Phan.

Situated on Botany Road in Rosebery, the intimate cafe is the perfect setting for a morning coffee (beans are supplied by Paul Bassett) or late-afternoon sweet with a taro or sweet potato latte – but beware, it gets busy. The aesthetic is varied; there’s an artificial hedge on one side, an exposed-brick wall lined with Polaroids on the other, and marble behind the counter. So there’s a perfect Instagram background whichever way you turn.