Dinner and a Show

Over in Lindfield, the new Blackout Cafe is serving dishes to share with friends over cocktails and music three nights a week. 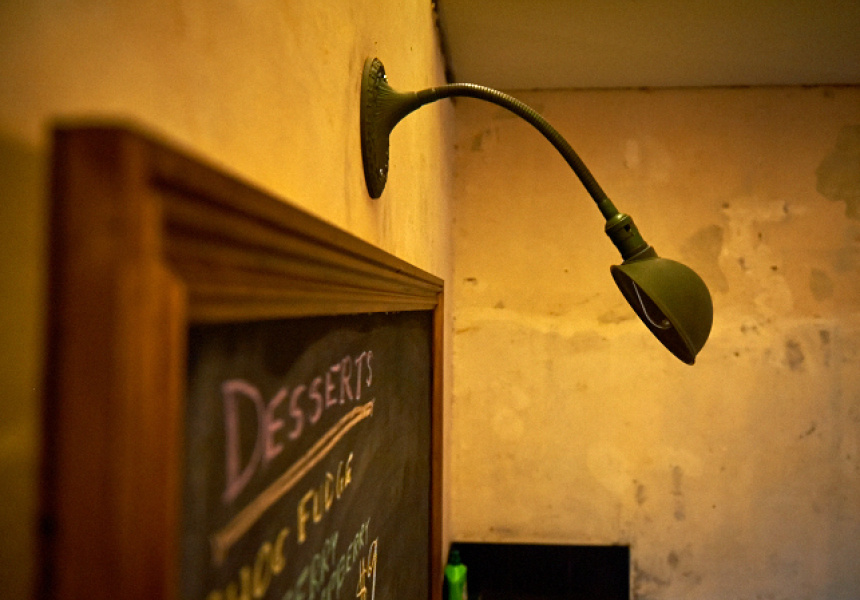 The arrival of The Blackout Cafe at the site of the former Indigo Indian restaurant has been warmly welcomed by Lindfield locals since opening just a couple of weeks ago. The name was inspired by the London Blitz during World War II and it is clear that the battle shelter theme has been translated to this dimly lit space. Designed by Nicholas Gurney, think heavy black curtains draped over windows, raw brick walls and exposed ceiling structures, vintage timber slated partitions and hanging antique lighting fixtures.

Start with a cocktail such as the espresso margarita with Patron XO and Kahlua, or mint julep with bourbon. Along with wines and beers by the bottle, the blackboard behind the marble-top bar offers quality drops by the glass including Paringa chardonnay and Rabbit Ranch pinot noir. The kitchen, led by head chef Shane Rider, features share plates and individual dishes such as spiced lamb pizza with smoky eggplant and mint yoghurt, or grilled Wagyu beef burger served on a brioche bun.

We recommend sampling the sharing plates, which include decadent steamed duck, shitake and water chestnut dumplings and zucchini flowers filled with goats cheese. Not to be missed are the juicy, spicy Italian meatballs served with cous cous. Worth the wait (expect at least 15 minutes) is the banana almond tart with banana cream and ginger wafer.

Located along the Pacific Highway, Blackout is the brainchild of Mal Harpur and Jas Gram. Harpur, a musician who has been performing around Sydney for several years, brings tunes to Blackout with live music on offer three nights a week. With an emphasis on showcasing emerging and established musicians, expect to relax amongst the communal tables while listening to funk and jazz on Wednesday and Thursday nights and soul on Sundays.