A Deli and Gelato Store by The Grumpy Baker

A once-quiet Vaucluse corner is now a small-scale dining and retail hub. 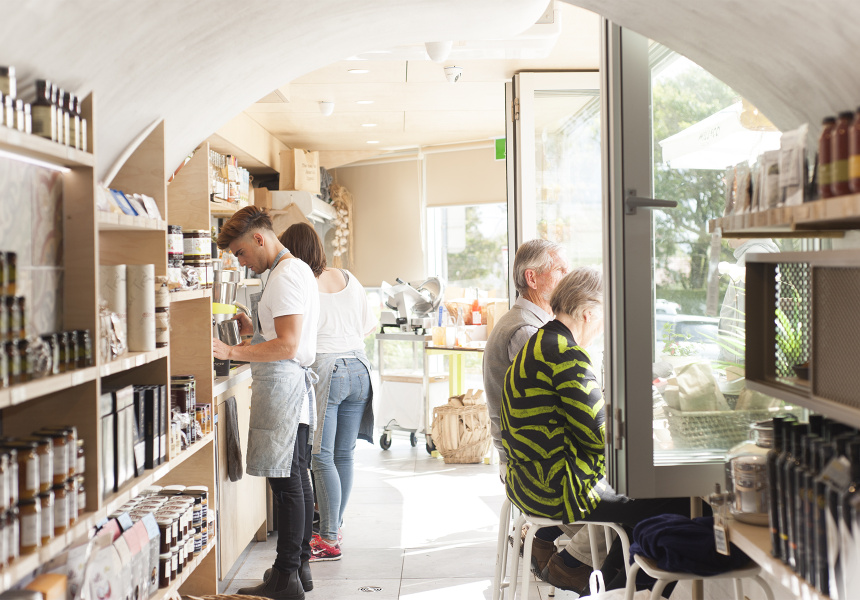 Michael Cthurmer opened the Vaucluse branch of The Grumpy Baker in 2011, and it’s been busy ever since. Now, he’s expanded into the two neighbouring shopfronts that cropped up after a recent apartment development, claiming this corner of the Eastern Suburbs as his own. “All the customers know everyone working,” says manager Maeva Couronne. “It’s like a big family, but in separate shops.”

Next door to Copetta is Bazaar Deli. Out the back is a dedicated cheese and salumi room, with imported produce from France to Spain, as well as local heroes such as Pepe Saya butter and Holy Goat La Luna cheese. To drink, there’s house-made cold-pressed juices and coffee made with almond or coconut milk. To eat-in, there are daily changing salads and sandwiches served on The Grumpy Baker sourdough and baguettes.

There’s the option of sitting outside, with white metal tables and chairs beneath umbrellas. Positioned at the base of Christison Park, it’s an ideal spot for dog walkers and parents chaperoning their kids to school sport. Couronne says she’ll also start doing cheese and meat plates. “I moved my slicer so customers can see that I’m slicing fresh from the big piece, not buying anything pre-packed. You can come and buy ingredients for a picnic in the park.”

The deli selection is small yet diverse – you’ll find kale chips in baskets beneath shelves that stock sparkly sugar, salt and mustard that has been tinted with gold leaf. Bazaar is by no means a one-stop-shop, but it can certainly provide a fine antipasto board and unusual additions to your pantry.

The now bakery-gelateria-deli hybrid is a welcome addition to this part of the world. “It’s all accessible,” says Couronne. “You can pick up your bread at Grumpy’s, have lunch at the deli and go for gelato afterwards. It’s a flow.”