Each kitchen in the dazzling fine diner harnesses a different element: steam, fire, smoke and ice. 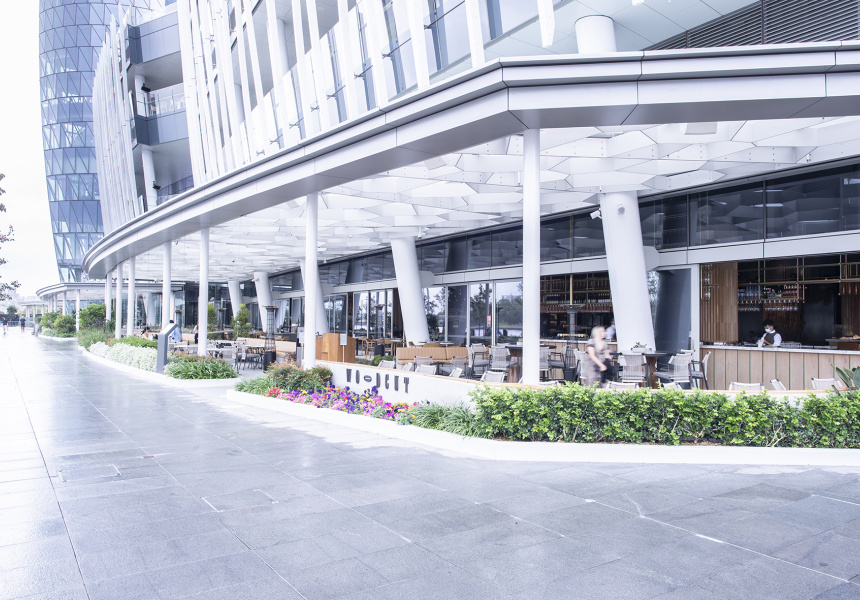 The menu at sprawling new restaurant Woodcut isn’t split into entrées, mains and desserts. Instead, it highlights the cooking methods used in the four open kitchens stationed around the 260-seat venue: steam, fire, smoke and ice (aka the raw bar). The kitchens offer a theatrical experience for diners, no matter where they’re seated, and creates de facto dining areas, making the vast space on the ground floor of Crown Sydney seem intimate and warm.

“Everywhere you go there’s so much to see, watching the chefs in the open kitchens. The venue lends itself to being experienced in a lot of different ways,” Sunny Lusted, who operates Woodcut with her husband, executive chef Ross Lusted, tells Broadsheet. The couple’s lauded CBD fine diner, The Bridge Room, closed in April 2019.

In the steam kitchen, delicate pipis are cooked in steam kettles, flavoured with vadouvan (an Indian curry blend) and served with roasted chickpeas and chickpea leaves. Smoky Wagyu skewers are cooked over the intense heat of a robata grill.

Piles of caviar and Yarra Valley trout roe, raw kingfish with lychee and grilled ginger, and grilled raw beef with salted duck egg and radish are served from the seafood kitchen. Swordfish and a 270-day-aged one-kilogram Black Market T-bone are cooked on the wood grill.

The menu is dazzlingly extensive; choosing from it is no easy feat. “The first time Ross presented me with the menu I wanted to eat everything,” Sunny says.

“We’ve been married 22 years, lived around the world, managed and owned venues together and I’m extremely honest with him when we’re testing a menu. In this case, he didn’t want to change a thing, and I think he’s right.”

Woodcut takes a holistic approach to the dining experience. “Historically fine dining has been formal. I don’t think people want that anymore. It’s now about considered dining. People want the details, to eat fantastic food served by professional waiters, but they also want fun and buzz.

“Certainly Woodcut can be experienced as a special-occasion restaurant, but if it’s Tuesday and someone wants to have oysters and a glass of champagne at the seafood counter, they can do that.”

The Lusteds have also snagged well-regarded pastry chef Lauren Eldridge. The Josephine Pignolet Award-winning chef was last seen applying her deft touch to the dessert menu at Melbourne’s Stokehouse, and completed her apprenticeship under Mark Best at Sydney fine diner Marque. At Woodcut, her delicate desserts riff on seasonal ingredients – in the summer months you might be served a quenelle of cherry sorbet atop a delicate meringue wreathed in the last of the summer’s cherries. Or a crisp dark-chocolate tart shell might encase a pistachio sorbet and blood-plum jam.

The 22-page wine and cocktail menu is split into chapters, starting with cocktails, beers and non-alcoholic drinks, followed by wines offered via the Coravin system, highlighted producers and by-the-bottle drops, finishing with spirits. “The wine team takes guests on a journey,” says Sunny. “People can explore on their own of course, but the team is so passionate and they can talk through what’s special about each varietal.”

A huge amount of effort has gone into the restaurant’s design. And with many elements echoing the Lusteds’ international travels, this is a venue with world-leading ambitions. The entrance’s high, straight walls evoke the sheer-sided canyons of Utah. The shining steam kettles have been custom-made and imported from Vancouver, Canada – and because Australian buildings don’t have steam running through them like those in colder climates, the company that made them had to invent an entirely new product for Woodcut. And the geometric black blocked ceiling tiles are inspired by the Giant’s Causeway geological formations in Northern Ireland.

Sunny says after eight years of running The Bridge Room, she and Ross are excited about their new chapter.

“We’ve been working on this a long time, and we knew what we wanted to capture. This venue is about entertainment and energy. We want people to come and think, ‘Wow. I want to go back there’.” 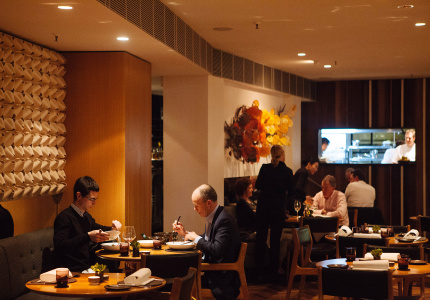