A Day in the Chin Chin Kitchen

In the lead-up to the first birthday of one of Sydney’s busiest restaurants, Broadsheet’s Tristan Lutze worked the pans and lived to tell the tale. 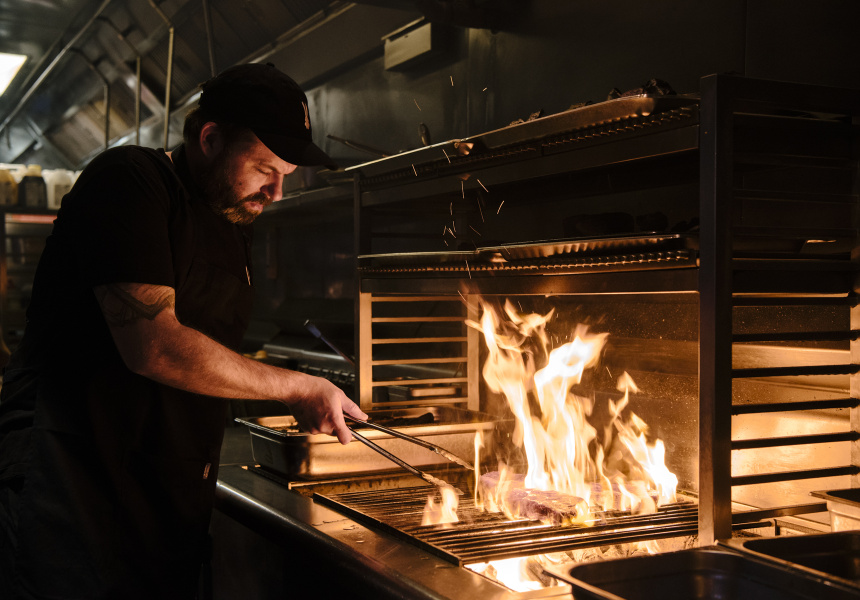 I walk into Chin Chin as the lunch rush is subsiding and give a nod to the pink-neon bunny that marks the entrance. Eric Carmen’s ’80s anthem Hungry Eyes is pounding through the stereo and, when it hits the chorus, every one of the dozen-or-so diners left in the restaurant mouths the lyrics.

In 12 months, the Sydney outpost of Chin Chin (it originally opened in Melbourne in 2011) has become one of the city’s busiest restaurants. Sliding into the spruced-up Griffith Tea Building, the Thai-inspired restaurant regularly turns over 800 covers a night, regardless of the day, and in its first year diners have ordered the “Feed Me” menu option (a selection of Chin Chin’s favourite dishes) more than 86,000 times.

As the restaurant prepares for its first-birthday celebrations, I’ve been invited to spend a day with the team behind this culinary behemoth. And while the dressed kingfish sashimi is one of my favourites on the 55-item menu, I’m not here to eat. Today, I’m here to cook.

Taking a popular restaurant to another city doesn’t guarantee success, but executive chef Ben Cooper says the Sydney Chin Chin is its own beast. “We didn’t come to Sydney to open a Melbourne restaurant,” he says. “We came because we want to open restaurants in cities that we fucking love.

“There was a lot of work done changing the menu and getting it right for up here. There’s the obvious stuff, like seafood, which is more relevant in Sydney than in Melbourne. And I’ve got the opportunity to use veg and other produce up here that I just can’t get in Melbourne as consistently.”

I’m decked out in an apron and a collection of Chin Chin merchandise. Then Cooper takes me through the slickly choreographed and well-equipped engine room.

“I’d been fighting for a rotisserie in Melbourne for three years,” he tells me as we stroll past the gleaming beast. “They told me it didn’t make sense; now they understand. Together with the chargriller, which we also don’t have in Melbourne, we can reinvent those Thai street food concepts, where it’s all done over a fire.”

Though the flames springing from the chargrill are hypnotic (they’re currently licking at a glossy slab of rib eye), I’m being called to a bench on the far side of the kitchen for chopping duty. There’s a whole box of green chillies to get through, but chef Cooper wants to check my technique before I go to work.

I slice as quickly and finely as I can. This is not my first time working in a kitchen, but I’m by no means an expert. Chef (we all gleefully refer to each other as “chef” once in the kitchen) tilts his head in vague approval, then reaches his arms around me and, with his hand over mine, guides my knife through the second chilli. “Use your knuckles as a guide,” he says as we both start humming Unchained Melody.

Guests begin to stream in for the Friday night dinner rush, which doesn’t dim chef Cooper’s playfulness. In fact, he thrives on creating the kind of environment where these kinds of antics – including bursting into Hungry Eyes – are encouraged on both sides of the pass.

“It’s really important to us that people understand this is an extension of our lounge room,” he says.

Once my metal tub is filled with sliced chillies, I’m promoted to a ceramic mortar and pestle reserved for pounding together Chin Chin’s signature green papaya salad. I’m supervised for a few rounds, then the dish becomes mine to deliver. Again and again. And again.

I smash garlic, chillies, snake beans, shredded papaya and carrot together every time the chef calls for a salad; and while I’m keen to impress with both my speed and consistency, I’m perpetually distracted by the thumping, chaotic happiness emerging from the dining room. Everybody seems to be having the time of their lives, including a local drag queen who strolls from table to table chatting to guests before vanishing into the night.

If there’s ever chaos in this kitchen, it doesn’t show tonight. Staff members joke with each other as they produce vibrant plates of food. There’s even a temporary buzz from the chefs as a recently ditched Bachelor contestants passes by on her way to a table, which is interrupted by a new set of orders that burst from a small printer.

After 40 or so salads and a handful of singalongs, I wipe down my bench and look for chef to bid farewell. He has other plans. “Tequila?”

Minutes later we’re sitting in nearby Tio’s sipping one of his favourite mezcals in what he says is his favourite Sydney bar. “We’re lucky,” he says, trying to summarise his Chin Chin Sydney experiences. “Some people say there’s no such thing as luck, but it’s really important to understand the role luck plays so you can work with it. It’s arrogant not to.

“Luck is the magic sprinkle that takes something from ordinary to amazing.”

Chin Chin’s first birthday celebration, One Night in Bangkok, is on October 25. Tickets are $88 and include food, entertainment and “after-party antics”.