It may have opened right as Sydney’s lockdown hit, but nonetheless this newcomer – led by a classically trained pastry chef – has already found success delivering its inventive sourdough-brioche doughnuts across the city. 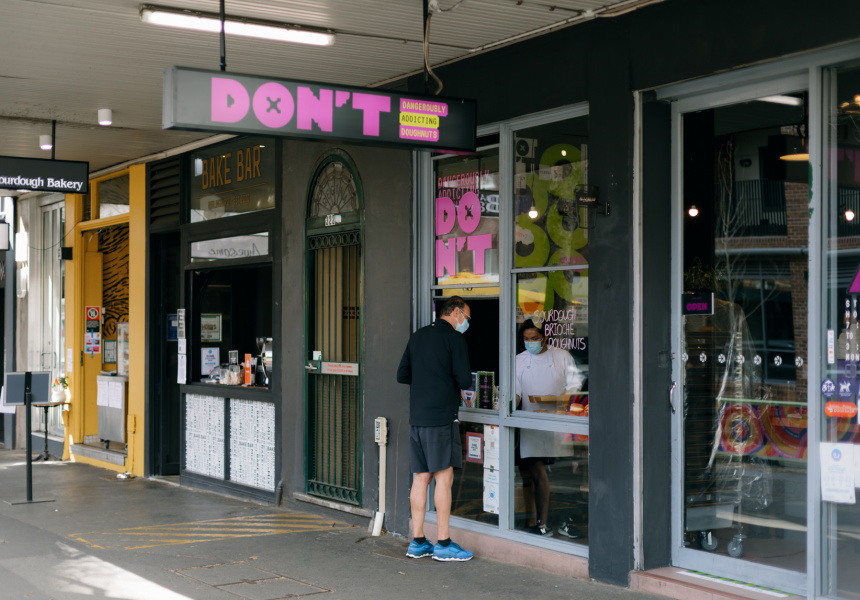 Michelin Dapo and Miko Aspiras were worried when Sydney went into lockdown a few days after they opened their Darlinghurst doughnut shop, Don’t Doughnuts. But doughnuts are the ultimate lockdown food – comforting, carby, sugary, joyful – so, they plunged into the delivery and takeaway game.

“We weren’t planning to do delivery straightaway; we were forced to do it. But things are going really well,” Aspiras, who honed his craft as a pastry chef in top Asian hotels, tells Broadsheet. Dapo is also a chef, but she oversees the operational side of the business.

Don’t Doughnuts has a succinct menu of 11 flavours. They’re understated in sweetness and appearance, which sets them apart from the doughnuts most of us are familiar with. None of the flavours are saccharine and the most colourful ones, such as the strawberries and cream, often contain real fruit.

The heart of Aspiras’s doughnuts is the dough itself, which is a soft but chewy sourdough-brioche hybrid. “We start with the mother dough, and then make the brioche with lots of good quality butter,” says Aspiras. “Some doughnut shops cover their doughnuts with sugary decorations. Ours are still quite pretty, but the flavours are almost secondary. They’re chosen for how they’ll go with the dough.”

According to Aspiras, a levain or starter can be made from flour mixed with any liquid. He uses a secret ingredient that celebrates the tropical produce of his native Philippines and gives the dough a bright, fruity flavour.

Aspiras draws on his background as an award-winning pastry chef, putting twists on traditional flavours. The dulce de leche has overtones of ginger; the garam-masala sugar is a spiced spin on a cinnamon doughnut; the classic vanilla glaze is made from Madagascar vanilla beans; and Vegemite spikes the salted butterscotch to provide a malty, savoury balance to the sweetness.

The burnt-Basque-cheesecake number is outstanding. The top is dipped in sugar and torched to an amber glaze, and a generous amount of blended-to-smooth Basque cheesecake is piped inside.

Aspiras loves to experiment with flavours. “I have 65 flavours in my recipe book so far and it’s growing every day. We try to put out a new flavour every week to keep it interesting. I have a tonne of ideas.”

While the doughnuts are aesthetically inconspicuous, the shop space is vibrant. There are neon pinks and purples on a backdrop of black, which Aspiras says is a play on the “sinful” nature of doughnuts.

There’s a large window for takeaway doughnuts and coffee by All Press. When lockdown is over, there’ll be seating for 25. Until then, delivery extends across all of Sydney via Door Dash, Menulog, or by DM-ing the shop on Instagram.

Since Don’t Doughnuts opened, a lot of people have commented that the duo chose the worst time to launch.

“There was no warning; nobody told us there was going to be another lockdown,” Aspiras says. “But I can say we are thriving. More and more people are getting to know our doughnuts, and Darlinghurst and the rest of Sydney has shown us so much support. This is how we define success.”