The son of the pioneering Italian winemaker is in Australia, and he’d like you to try his limited-run orange wines. 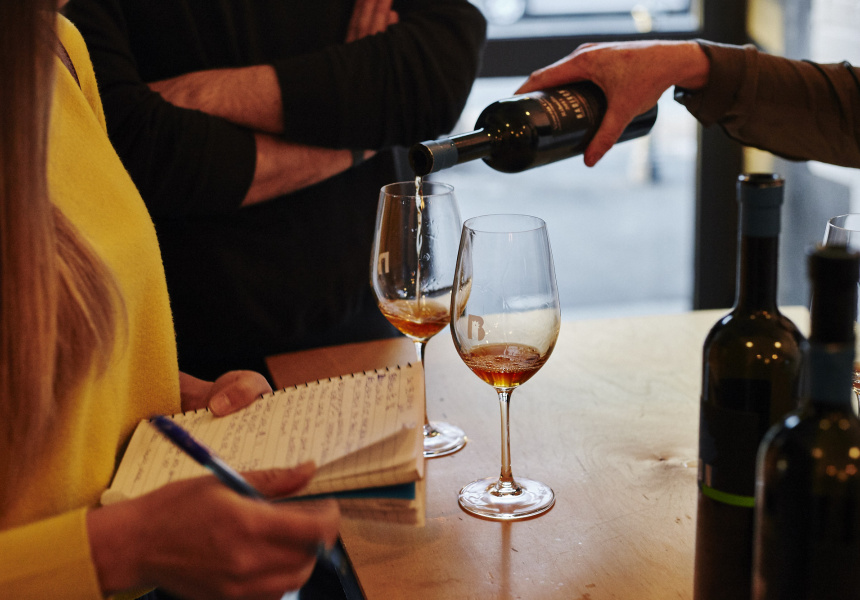 It’s a simple philosophy, but in this modern age of farming with chemicals, and in which perfection replaces seasonality and expression of place, it’s a radical approach.

Saša Radikon is the vigneron behind Radikon. The family winery is located in the north-east of Italy’s Friuli-Venezia Giulia region and, while it might be small, its methodologies are pioneering and set the benchmark for natural and orange wines across the globe.

Saša is in Australia hosting tastings of his newest vintage release, which is extra exciting news for the local minimal-intervention crowd. “I lost my father two years ago, so this year I've travelled a lot just to say everything is okay,” he says.

Saša’s father Stanilaus, or “Stanko” Radikon, was his friend, teacher and collaborator. He passed away from cancer at the age of 62 in September 2016 – just one week shy of what would have been his 37th vintage.

When this much-revered giant among the natural-wine scene left our thirsty world, there was something of a rush to scoop up the small number of bottles that remained on the market. Saša, who had lived and breathed wine by his father’s side for more than a decade, stepped into the role as winemaker to fill the void. “I’d been working with my father for 15 years,” he says. “It’s such a small winery – we did everything together.”

Radikon is renowned for its orange wines, also known as “skin contact” wine. It’s made via a process that involves the juice of white wine grapes spending time in contact with the grape skin to extract more colour and flavour. The result is complex and textural wines in golden hues. They’re arresting, tannic and have that saliva-inducing quality we’d usually associate with red wines more than whites.

This is how it’s traditionally been done in Slovenia, and the Radikons’ vineyard plots fall on either side of the Italian-Slovenian border. Old-school winemaking is also about low-yield organic farming, harvesting by hand, fermentation without temperature control, wild yeasts, no fining or filtering, and using little or no sulphur.

This is the methodology the late Stanko Radikon adopted in 1995 when he realised the pale, unexciting wine of the area made with the indigenous ribolla gialla grape was not the fullest or truest expression of the fruit. Despite DOC (the body that oversees the classification of wine) saying otherwise.

"We are not allowed to be in the DOC because of the colour [of our wines],” Saša says, adding Radikon has been happily declassified since 2001.

Stanko took a hit with his rebellious skin-contact revelation, losing half his customers in that first experimental year. But 25 years on, that brief setback has paved the way for lo-fi Australian winemakers to also shrug off convention and to create wines that are both old and new. A lot of drinkers are excited by this flood of tannins, pigments and intense flavour.

While his father was engaged in constantly imagining new spaces for innovation and rumination, Saša was busy creating gateway wines – transitioning perplexed orange-wine newcomers into the next generation of skin-contact-obsessed oenophiles.

Radikon’s S line is Saša’s personal project started in 2009. Made with 10 days on skins and aged for a year and half in oak barriques (an oak barrel with a specific size and shape), the S wines are fruit-driven and utterly smashable, but with enough tannin to make you pay attention and probably ask for more.

The family’s principal line of wines involves longer skin contact (two to four months depending on the vintage), followed by about five years in barriques and at least two years in bottle before release. They’re richer and more complex, often with softer tannins from the time spent ageing, but also enough to get you salivating, making them a great food match.

Radikon’s 2011 vintage and 2016 S line landed in Australia two weeks ago and have been distributed to about 70 restaurants and wine shops and bars around the country. But with only 2400 bottles, there is never enough to go around. “We always run out of wine too early, so we grew up a lot this year – we went from 12 to 18 hectares. Currently we are short on stock, but in the future we will have more.”

Saša Radikon is at Mary’s Newtown Friday August 3 for a late-night supper (aka raucous party), from 9.30pm. He’s at the Dolphin Hotel on Sunday August 5 for Delfino Aperitivo from 5pm to 7pm.

Want to know more about natural wine? Read this and this.