We sit down with Jeremy Spencer of The West Winds Gin to learn more about how their true blue gin is made and what gives it such an Australian character. 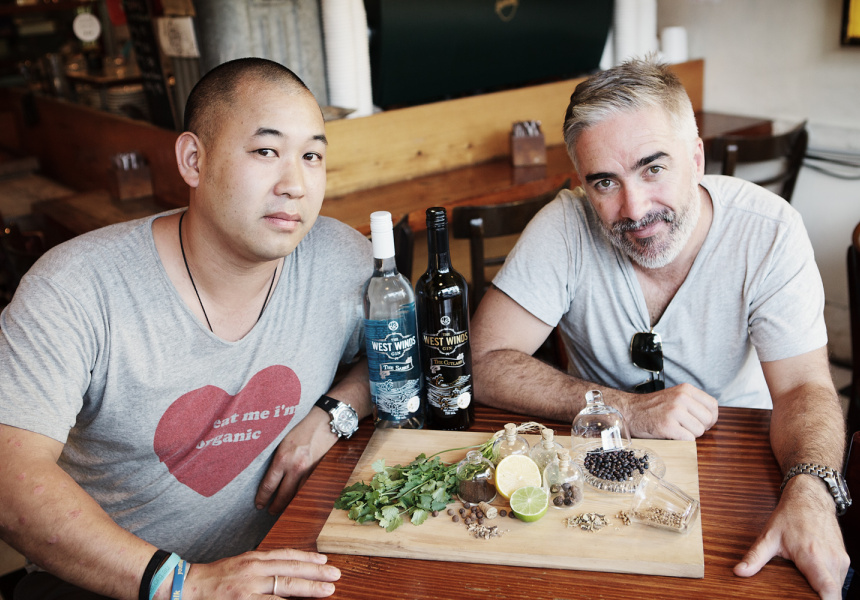 Gin tends to conjure images of your grandparents sitting on some antique furniture, sipping from a tumbler. A favourite among many generations, it’s the drink with a history dating back to the 17th century and has rightfully earned the reputation as a long-standing (albeit unchanging) classic.

In the last few years, we've seen a number of specialty drink movements. First came the rise of craft beer and cider, followed by artisan whiskey and, more recently, rare tequila. But what about gin?

Well, in 2010, two good mates in Jeremy Spencer and Jason Chan, joined forces to give gin the revamp it deserves. The West Winds is an Australian gin company dedicated to shaking up the way we think of this classic spirit. “We set out to make a world-class gin,” Spencer says excitedly of their two varieties, a classic English palate gin dubbed The Saber and the non-traditional Cutlass. And that they have, with their two bottles winning a Gold and Double Gold medals respectively at the San Francisco World Spirits competition in 2011.

But what makes The West Winds so special is the brand’s dedication to Australian flavours and ingredients. “The beauty of gin,” Spencer explains, “is that we can really impart a lot of Australian flavours in the gin using native botanicals. With tequila, you have to make it in Mexico. Vodka, you have to have no flavour,” he adds with a laugh. “And with whiskey,” Spencer continues, “[your flavours] have to be true to the great whiskeys around the world. But with gin, we knew we could do whatever we wanted.”

So, how is this versatile beverage made? Well, gin gets most of its flavour from wheat spirit and juniper berries. But the freedom to choose botanicals and spices to add from there is immense: “The lowest botanical count I have seen in gin is three, and the highest is 47,” Spencer says.

When it comes to the flavour profile of The West Winds’ Saber (the classic English-style gin), you’ll find the usual spice suspects: citrus fruits like lemons and limes, allspice, orris root, coriander and liquorice. But what gives their gin a uniquely Australian flavour is cinnamon myrtle, lemon myrtle and wattle seed. “The wattle seed gives the gin a natural sweetness so that we don’t have to use any fake sweetener,” Spencer explains, “because no one wants that.”

Taking the motto ‘think global, shop local’ to heart, The West Winds goes to great lengths to find high quality ingredients locally. “We know exactly where our ingredients come from,” Spencer says. “For example, we get our coriander from our neighbours, which we pick fresh every morning to use in the day’s batch.”

But the key ingredient? Rain water from the Margaret River. “When your beverage is made mostly of water, it’s incredibly important to have pristine water,” Spencer explains, “and they’ve got incredible rain water.”

The non-traditional Cutlass brings a little more of a complex flavour palate to the table with the native bush tomato. “The Cutlass is all about rebelling against the norm,” Spencer declares. “It’s a big, bold, vegetal statement of a gin.”

For both gin varieties, the process is roughly the same. Once all of the spices and ingredients are sourced, they are combined into their beloved Holstein 150 litre copper pot distiller to go through the seven-hour distillation process. For those of us who may be wondering why the use of copper, Spencer offers a scientific explanation: “The geeks will love this,” he smiles. “Copper is an excellent conductor of heat. All of the greats use it, and it gives great flavour.”

After moving through the distiller, the liquid is run through a column, cleaned up and then bottled. “The ingredients go in fresh in the morning and come out ready to go in the evening,” Spencer boasts. “Some people bottle it for 12 years, we say bullocks to that!”

It’s an attitude that says a lot about The West Winds team. For these guys it’s all been all about experimentation and having fun. “We’re still just a bunch of guys wearing jeans and thongs who love to have a great drink,” Spencer says with a laugh.

If gin is a conservative old drink, no one told them.