There’ll be 250 bottles with many low-intervention wines from Italy and Australia, and a rotating menu of pasta that changes daily. 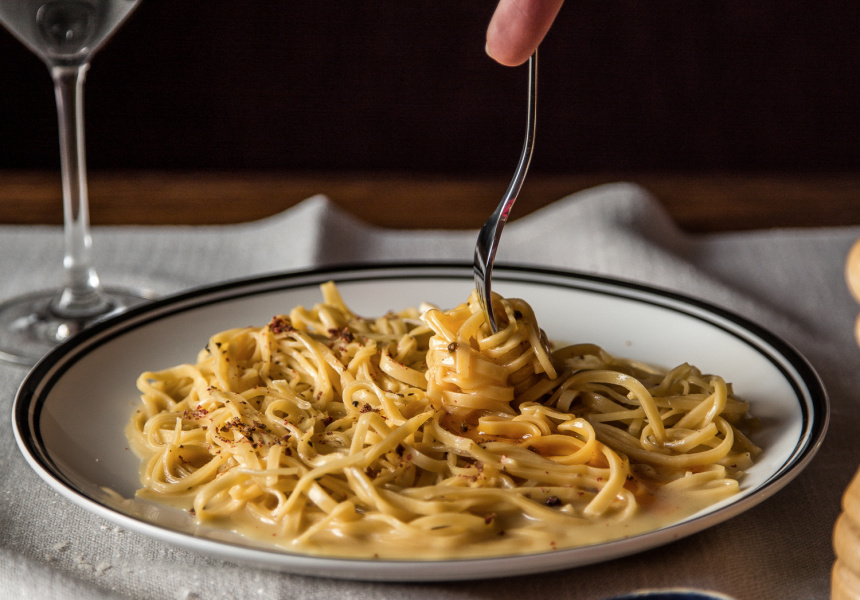 Where wine bars Love, Tilly Devine and Dear Saint Eloise highlight minimal-intervention wines from Australia and France respectively, the third venue from owners Matthew Swieboda and Nathanial Hatwell will do the same for Italian producers when it opens next month.

Ragazzi, also co-owned by Felix Colman and chef Scott Williams (ex-MoVida, Bacco Osteria), will open at Angel Place in the CBD with an emphasis on vino and handmade pasta, influenced by Williams’s time in the kitchen at Bacco Osteria.

“There’s slightly more of a food focus than what we’ve done in the past,” Swieboda tells Broadsheet. “I think the quality of Scott’s pasta is so high – a lot of people will be coming in for a full meal.”

The menu will feature five or six pastas that change daily. Traditional shapes and sauces will be crafted with contemporary techniques and local ingredients.

Expect dishes such as crab tagliatelle, sea urchin spaghetti, or ravioli filled with Jerusalem artichoke and topped with pecorino and bitter honey Williams makes himself. Occasionally, whole goats will be brought in for him to use in different dishes throughout the week.

"We're just working with a type of food that we absolutely love,” Swieboda says. “Who doesn't love eating pasta, you know? It's one of the really basic desires that everybody has."

At the bar, snacks will draw on Williams’s experience cooking in Spain, with Italian ingredients and Spanish techniques. The drinks list will have around 20 labels by the glass, and around 250 by the bottle, many from Italian producers and others from Australian winemakers using Italian varietals.

“No good wine list in Australia at the moment doesn’t have a focus on [natural wines],” Swieboda says. “But we want to have a cracking wine list that has a bunch of things that cater to everybody, [so] we’re not going to preclude any style of wine.”

The venue, in a laneway beside the City Recital Hall, will have 38 seats in total, with 10 at the bar. The space will be fitted out with neutral and warm shades, textured concrete walls and leather banquette seating.

Swieboda says that for a lot of Australians Italian food and culture are ingrained in everyone at a young age. He recalls classmates in primary school learning Italian growing up, and everyone would sing Happy Birthday in the language.

One of the words everyone knew was “ragazzi”, which literally means “children” but is used colloquially to refer to mates or buddies.

“And I suppose that’s what we are,” he says. “We’re four mates opening a bar. It just made sense to us.”

Ragazzi is slated to open at Shop 3, 2–12 Angel Place, Sydney in August.