The Coffee That Gives Back

With the annual CafeSmart event happening this Friday, we ask a couple of our favourite cafes why they participate in this charity drive with a difference. 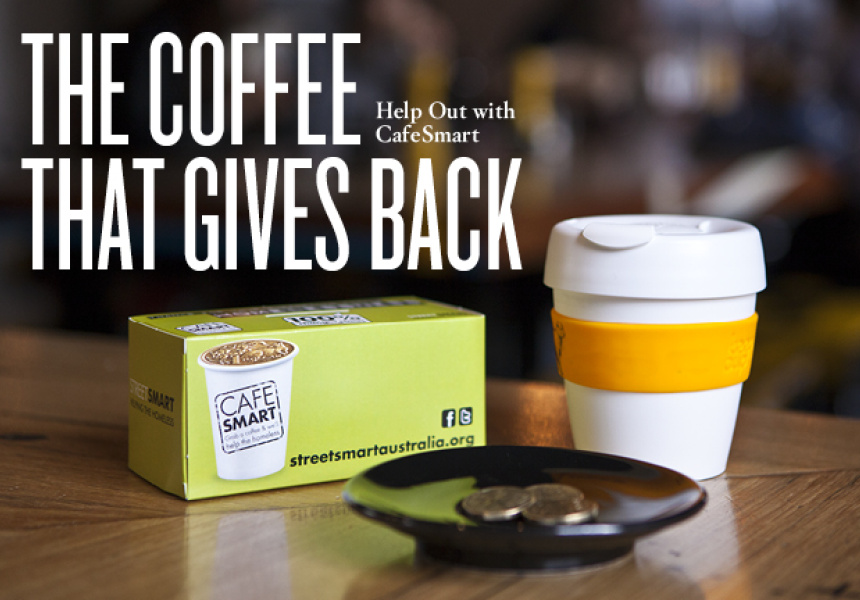 This Friday June 7, cafes all over Sydney are taking part in the coffee fuelled charity drive CafeSmart. An initiative of StreetSmart Australia, the charity day sees participating cafes donate $1 from every coffee sold to StreetSmart Australia for the benefit of charities caring for the homeless or those at risk of becoming homeless in the café’s local area.

Now in its third year and driven by the passion of CEO Adam Robinson, CafeSmart is gaining momentum each year, with many cafes participating regularly. The idea is that to really help the little guy – the services that deal with issues specific to each local area – someone needs to lend a hand when those charities don’t have the resources or manpower to raise funds on their own. [fold]

The aim of CafeSmart is to strengthen and support local communities, with past grant recipients including SecondBite food rescue Sydney, the Women’s and Girls Emergency Centre in Darlinghurst, Options Youth Housing in Bondi and Phoenix House Youth Service in Crows Nest. It’s simple, it’s elegant and there’s even an option to match your cafe’s $1 donation from your coffee by donating some coins of your own.

We caught up with a few of our favourite cafes taking part this year to ask them why they choose to be involved with CafeSmart.

With their North Shore café and micro-roastery, Bay Coffee are taking part in CafeSmart for the first time this year, but they’re going above and beyond the usual $1 donation from each coffee.

“We’re based as a cafe and roaster, so some of the cafes that use our coffee are doing it too and we’re giving them free coffee to do that,” says owner David Rosa, noting that his own reasons for supporting StreetSmart are quite personal.

“One of my friends has a mental illness and when he’s unwell he hits the streets. I help to go out and look for him. With mental illness it’s a bit of sleeping giant that no one wants to know about. StreetSmart is very hands on and grass roots.” For Rosa, supporting a charity that can really reach out to help services in his local area is one of the key factors in joining the CafeSmart initiative.

South: The Grounds of Alexandria

For the team at The Grounds of Alexandria, this is their second year taking part in CafeSmart. “We did it last year straight after we first opened,” says Anthony Orange. “We’re aiming to double what we raised last year because we have more foot traffic now, and the donations include both our dine-in and takeaway coffees.” Pleased with where the money went last year, the team saw every reason to be as involved as possible this Friday, believing that StreetSmart is best placed to get the money where it needs to go.

“We’re happy for StreetSmart to take control of where the money goes, because it goes within the area and they give us updates once it’s all done.”

Chris Sorrell and Three Blue Ducks in Bronte are also taking part for the second year in a row. “It was great last year, we raised about $800,” says Sorrell, pointing out that it was his coffee supplier who got him on board with CafeSmart. “Dion [Cohen] at Single Origin Roasters got us into it and he’s a big supporter. He donates a fair bit of coffee towards us doing it and we also ask customers to match our $1 donations on each coffee.”

Sorrell was convinced when he heard about the localised approach to the donations. “Passing the money onto smaller charities that don’t have the resources to raise funds is a great help for the little charities and it keeps it local. The money we raise will get used in and around Coogee and Bondi. And it’s such an easy thing to get behind.”

For James Brown at Double Roasters, the local aspect also hit home. “Anything that is raised at Double Roasters goes to support services in our local area. The website is very clever and clear and shows where the funds went previously. It’s all very transparent, some went to a local charity at Enmore that helps fund youth unemployment and also to food rescue near Mascot.”

Again, the team will be encouraging coffee drinkers to add their own donations to the cause or to match the $1 donation on each coffee.

At The Little Queen cafe in Chippendale, Rob Fuller is an old hand at supporting CafeSmart. “This is the third year I’m doing it and considering the success of past years it should be good, and it brings in customers,” he says, noting that the feel good factor is a powerful motivator. “But the reason I started was because I get my coffee from Allpress, who’re heavily involved, and it’s nice to give something back to the local community.”

Fuller agrees that it makes sense to leave distribution of the money raised up to an organisation that really knows where it’s needed most, not just in Sydney but right around Australia. “I’m happy to leave it up to them – they’re really on top of it.”

For a full list of cafes participating in CafeSmart this Friday June 7, check out: streetsmartaustralia.org