This new casual restaurant channels Tokyo and Seoul, with food by chefs from fine dining and Korean barbeque backgrounds. It’s hard not to smile when you’re dining at Tokki. When Broadsheet visits, the casual eatery is pumping to the likes of Toto’s Africa and A-ha’s Take On Me. Looking around the room we can see people mouthing lyrics between mouthfuls of chicken, and the staff dance between tables. The place is packed – date nights, colleagues catching up, and even that group of friends who pull their phones out at the delivery of each dish.

The corner venue is beautifully lit, with cute light boxes at the front window showing off the name and, behind the bar, the words “Get your fix”. Pendant globes hang over the bar and there’s a splash of neon not dissimilar to the Chin Chin pink. There’s no staff uniform and it’s warm and inviting even though it’s got a little bit of an industrial vibe, with cement finishes, neatly stacked timber shelves and white tiles.

Tokki is run by the same team behind artisanal Korean barbeque joint Kogi, which opened in the Market City 1909 Dining Precinct in 2018. For this new venture they’ve gone for Korean with a touch of Japanese, and have channeled the vibes of their major cities.

The menu, prepared by brothers Sungyu Lee (ex-Sokyo) and YG Lee (Rockpool, Grounds of Alexandria), is a considered compromise between their fine dining and Korean barbeque backgrounds. Pacific oysters are served with a peach-and-white-soy mignonette, and yellow fin tuna with roasted pine nuts, lime ponzu and bacon-cream fraiche.

We recommend adding the miso-butter prawns and Korean fried chicken to your order. The chicken is served with either a gochujang (fermented red chilli paste) or a sweet galbi sauce (soy sauce, garlic and sugar) – traditional flavours in Korean food – and we guarantee fingers will definitely be licked.

As for your drinks, there are plenty of beers, sake and cocktails. But you won’t find the wines listed by regions or vintages. “I want people to pick the wine based on its flavour profile or how it’s made, rather than just where it’s from,” says Ashby.

That said, they’ve kept the list Australian (apart from the champagne) and there’s a focus on biodynamic and organic producers. Our pick? A bottle of Das Juice SSSB that’s blended from three grapes from two vineyards in the Adelaide Hills, and the Dune Pyla, which is seasoned in oak barrels for 10 months after fermentation.

The word “tokki” translates to “rabbit” in Korean, and there are illustrations of the animal on the walls and on the menu, manga-style. If you want to hear more about this cheeky character, get the staff to tell you the fun story.

This article first appeared on Broadsheet on January 28, 2020. Menu items may have changed since publication. 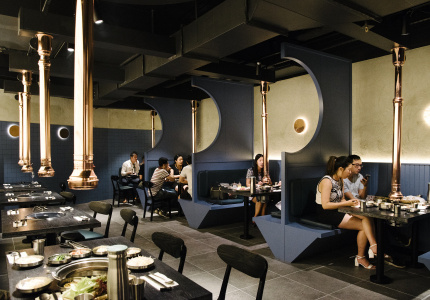