Try your hand at these Scandinavian baked goods for a comforting teatime treat. 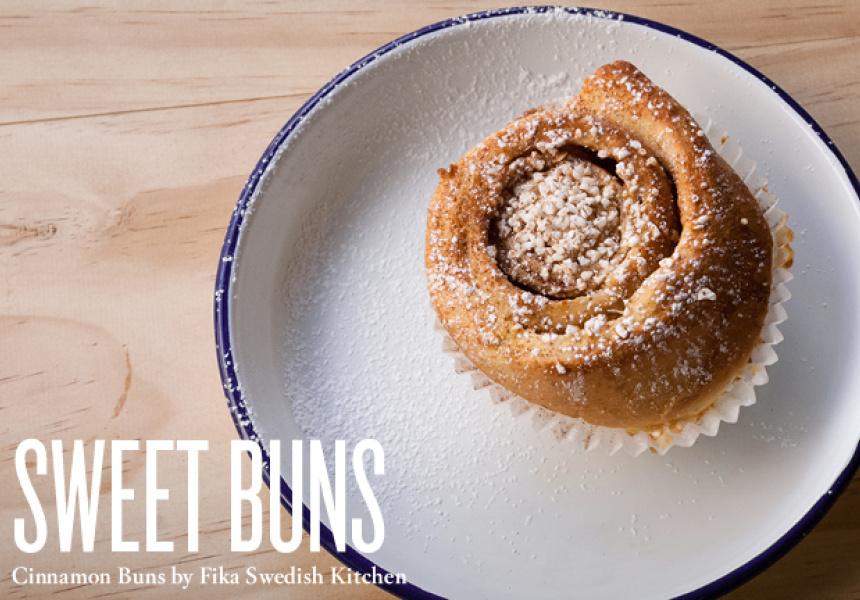 “I’d be surprised if there was a cafe in Sweden that didn’t have them,” says Fika Swedish Kitchen co-owner Linda Stanes of the nation’s much-loved pastry, cinnamon buns, or kanelbullar. “You can find them any time of day, but we have them in the afternoon mostly.”

Fika’s recipe follows the traditional approach, where ground cardamom is added to a sweet, bread-like dough, which is lined with a buttery cinnamon-sugar to keep the buns moist once baked. Their bona fide Swedish chef – Stanes’ sister, Victoria Persson – bakes fresh batches of buns throughout the day to serve them hot from the oven.[fold]

Stanes says that it’s all about letting the dough rise twice before baking the buns. “That makes them quite light and airy. The perfect bun is soft, with even layers of butter and cinnamon inside so each mouthful is juicy and flavoursome.”

Preparation:
• Preheat oven to 200°C
• In a pot, heat the milk over a low heat until lukewarm (or to 37°C if you have a thermometer)
• Add warm milk to a bowl and add the yeast, whisking to mix them together well
• Gently add sugar, salt, flour, cardamom and butter to the milk mixture. Mix until it becomes a smooth dough, and knead for a few minutes
• Cover the bowl with a tea towel, and leave the dough in a warm spot for 30 minutes to rise
• Dust a bench area with flour. Remove the dough from the bowl and flatten it with a rolling pin. Roll the dough out so it is quite thin, similar in thickness to short crust pastry
• Spread the softened butter over the rolled-out dough with a spatula, making sure to cover the entire surface area
• Dust the cinnamon over the dough using a sieve, then sprinkle sugar generously on top of that
• With the cinnamon facing up, take one end of the dough and roll it onto itself to form one long roll. The roll should be about 5cm in diameter. Cut the roll into 4cm-long pieces
• Turn the roll pieces upwards so the cinnamon layers are on top, and place each piece inside a cupcake case on a baking tray. Let the buns rise for another 30 minutes
• Brush the tops of the buns with the beaten egg and sprinkle over some of the pearl sugar crystals
• Bake buns for 10 minutes, or until golden on top