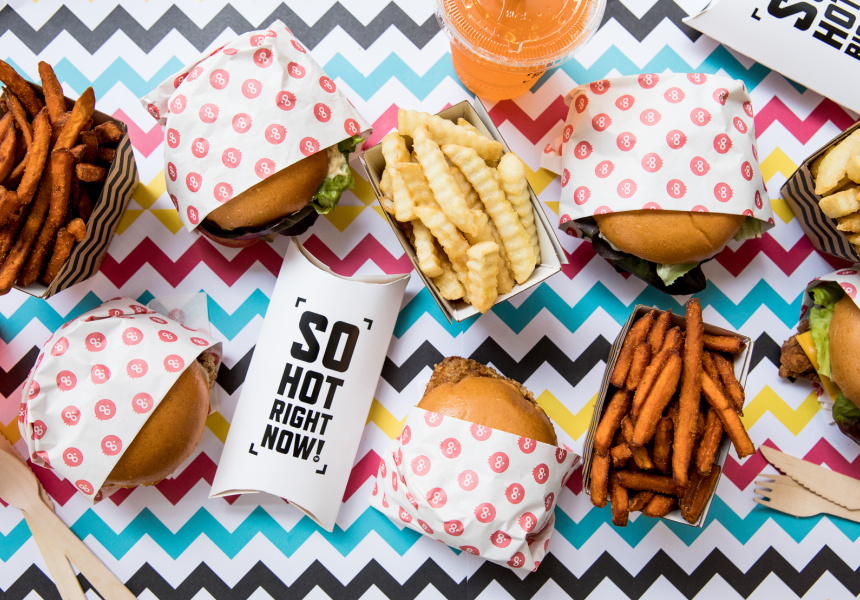 About 18 months ago, Luke Mangan walked into an inner city KFC. It wasn't in good shape and his burger, as he says, was far from good. He thought, “Why isn't anyone doing a better version of this?” Welcome to Chicken Confidential, a Chifley Plaza chicken-burger stall about to be replicated all over Australia.

“There's been a lot of burger places opening but it's all a bit same-same. We've always wanted to do a fast-food eatery but we were looking for a point of difference,” says the restaurateur, chef and TV personality. Chicken Confidential is Mangan’s attempt to modernise the Australian/American chicken shop.

Underneath the blaring neon sign and the store’s shiny new tiled countertop, there’s a menu structured similarily to KFC but more reflective of the current culinary landscape. The first point of different is the chicken itself – all organic birds from Queensland’s Inglewood Farms. Then there’s the burgers. Gangnam Style has a massive Korean fried-chicken patty, kimchi and a spiced mayo; Yes Ma’am has Southern-style fried chicken, red onion, pickles and the house sauce; and Curry Up has spiced and grilled chicken, raita and buffalo mozzarella.

While burgers are certainly the focus, Mangan and executive chef Joe Pavlovich have brought in other chicken shop dishes such as salads; crumbly, if a bit dry, chicken tenders; and a chicken and tarragon pie, which despite being surprisingly flaky and rich, will probably be too expensive for the average pie-lover at $16. This will be the exact same menu you’ll find at each of the upcoming Chicken Confidential locations. The fit-out may vary slightly when a stand-alone shop opens, but the industrial American design will remain.

“I worked very closely with them on what I wanted. We wanted it to be modern, hip and funky and that's what we've got,” says Mangan. There’s no announcement as to where it’ll be heading next but expect the expansion to be quick. “Within the year I'd like to open five or six and within the next two years I'd like to have about 20.”