Some of NSW’s best restaurants are sending their young guns up to Woy Woy each month to show off their skills, and you’re invited for dinner. 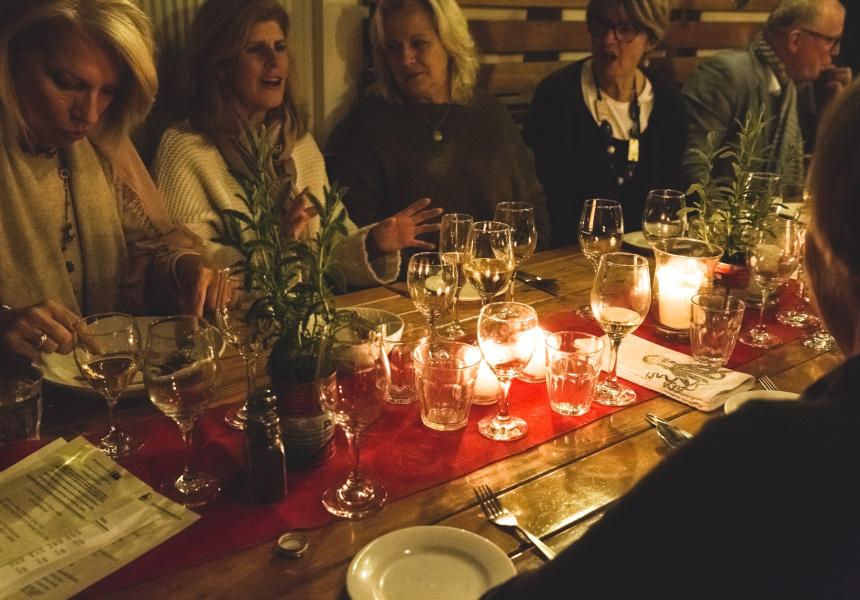 Up north near Killcare, the Woy Woy Fishermen’s Wharf juts out into the dark Brisbane River, lit-up like a torch in the twilight. Inside on a winter’s Friday night, tall gas heaters warm the room and guests sip flutes of Kir Royale as the river laps beneath gaps in the floorboards underfoot. Usually, this fish market and casual restaurant is filled with locals having lunch, but tonight it’s filled with visitors from the city having dinner.

They’ve caught the train up to Woy Woy (about 1.5 hours from Sydney) to eat the food of Café Nice’s Joshua Niland, who’s taken over the kitchen for the weekend to serve whipped cod roe with potato chips, sweet-and-sour confit tuna and a flaky rhubarb tart. Niland is one of the early bookings for the Fishermen’s Wharf’s new chef takeover series, slated for the first weekend of every month until May next year, transforming the restaurant into a dining destination away from the CBD.

The Fishermen’s Wharf is a family business, and has just celebrated its 40th year. Its focus on sustainable fish, both on the restaurant menu and for sale in the on-site fish market (the second largest in NSW), has been the work of Sam Clayton, a third-generation operator of the restaurant. It was also Clayton who instigated the new monthly events after two chef friends in the planning stages of a new restaurant in New York got in touch, asking if they could test the menu out on the Wharf’s customers, their families and friends. “Matty Bennett cooked at Longrain for many years and we knew he'd come up with a menu that would sit well with what we do here at the Wharf already,” he says. “The two nights were a massive success and we had a great response from our customers, so we thought we'd keep going with them.”

Clayton has curated a roster of up-and-coming chefs from big-name Sydney restaurants for the rest of the year, and into next. As well as Niland and Corey Reed from Momofuku Seiobo (who launched the series), upcoming months will see Ben Turner from Aria, Khanh Nguyen from Mr Wong, Matteo Zamboni from Pilu at Freshwater, Rhys Connell from Sepia and Scott Williams from MoVida Sydney, among others, take over the simple kitchen in Woy Woy. “We wanted young and upcoming chefs from NSW’s best restaurants who didn't just see this as another ‘appearance’ gig, we wanted people with a hunger to not only show off their skills, but also to happily collaborate with us,” says Sam. “We also wanted a variety of chefs who would offer contrasting menus so that each set of dinners would be remarkably different.”

Next up, Pilu’s Matteo Zamboni will take over on October 2–3 (the restaurant will take a break in September).

For more information and to book, see woywoyfishermenswharf.com.au/woy-woy-take-over.