Cheap Eats Under $10 in Petersham Little Portugal isn’t flashy like Newtown’s King Street or quaint like Dulwich Hill’s Marrickville Road. But if you’ve got a business on the side of New Canterbury Road’s noisy thoroughfare, you’ll be elbow-to-elbow with some of the best cheap eats in the Inner West.

Petersham is La Boulangerie’s third outpost, the other two are in Miranda and Menai, and all the bakeries draw on French recipes, made with exclusively French ingredients. Try the tartine forestiere – an open baguette of prosciutto, tomatoes, pesto and cheese, which is toasted under the grill.

Meat-pie jaffle at Daisy’s Milkbar – $10
Daisy’s meat-pie jaffle isn’t your typical toasted cheese sandwich. This version involves a beef, carrot and celery mixture, which has been slow-cooked in whatever kind of dark ale takes the chef’s fancy that week. A slice of American jack cheese finishes the sandwich off, before it goes into the jaffle maker.

“It’s my favourite of all our jaffles,” says co-owner Jess de Varine Bohan. “It’s so good.”

Customers agree. Daisy’s recently opened for dinner and at first decided to omit the jaffles from the night menu. “People were so sad there were no jaffles at night, so we had to put them on the dinner menu,” she says.

Half chicken and chips at Frango – $10
“Portuguese chicken is butterflied and cooked over charcoal,” says Frango manager George Amaro. “It comes from the great great grandfathers … Portuguese settlers in Africa. They started cooking piri-piri chicken in Angola and Mozambique, and it became very famous. [The dish] went back to Portugal and to Australia via Africa.”

There doesn’t seem to be a time of day when Frango isn’t packed with people. The shop has been cooking chicken for 25 years. Behind the counter, a long charcoal pit is fitted with skewers rotating whole chickens, as a queue of people await their orders.

A word of advice: decide whether you want piri-piri sauce on your order before your food is cooked. There’s not much time to deliberate before the staff decide for you and paint a generous splash of sauce onto the glistening skin. You get the sense they’d be disappointed if you refused the mildly spicy, tangy chilli sauce.

Portuguese tart at Sweet Belem – $3.50
When Jose Silva bought Sweet Belem from the original owners, he made sure to learn the 15-years-worth of original recipes that came before him. The most important recipe he retained was that of the Portuguese tart, which Silva remembers buying from Sweet Belem when he was a child.

Piled in the pastry display, their tops glisten and are caramelised to a near-burnt dark brown. They look like they might have been blow torched like a crème caramel, but they’re not.

“We do them in the oven at a high heat for 12 minutes just until the puff-pastry shell starts to puff up. It’s important to get the caramelisation on top, but to not overcook the custard inside,” he says.

Portuguese chicken burger at Silva’s – $9.30
If there’s a common theme in the eateries along New Canterbury Road, it’s that the chefs won’t divulge their recipes. Silva’s is no different. The Portuguese chicken shop has been trading for 18 years and the Silva’s chicken-burger recipe hasn’t changed in nearly two decades. Chef Osvaldo Silva wouldn’t mess with something that works so well.

The burger features a marinated-chicken fillet, cooked on the grill, and finished with a brush of house-made piri-piri sauce or a lemon-and-garlic sauce.

When asked if there’s a rivalry between Silva’s and Frango, Silva’s wife Guida says, “There’s no rivalry. Lots of people around Sydney serve the same kind of food as us and I reckon there’s room for everyone.”

Pork roll at Charlie Phi – $6
When asked to pick her favourite banh mi, Charlie Phi owner Myn Swindail is pragmatic. “You can’t have a pork roll every day,” she says. “Standard pork rolls are always good, but the other ones are nice too. Have a chicken roll one day, a meatball roll the next.”

A perfect roll always has nine elements. “It’s the pate, the mayonnaise, your choice of meat and then the vegetables. There are pickled carrots, cucumber, daikon, shallots coriander and chilli, which is optional.” Her voice lowers conspiratorially as she describes the final ingredient. “Most important is the secret sweet-soy sauce. Everyone makes it a bit different.”

Mortadella-and-provolone sandwich at Charlie’s Deli – $3.30
At 37 years, Charlie’s Deli is the oldest business Broadsheet has visited for this column. It’s a family business run by the Santoro family. The patriarch Charlie has passed away, and now the kids, Lucy, Angela and Sam, run the deli with their mum.

The space is full of interesting sights: an assortment of meats, cheeses, olives and roasted vegetables under the deli counter, while stacks of preserved salted cod line plastic boxes.

Any combination of meats and cheese from the deli can go into a sandwich, but Lucy recommends a simple mortadella-and-provolone sandwich on a crusty bread roll, like Italians eat.

Lucy grew up eating mortadella. “Before dad bought this business, he was a bread vendor,” she says. “Every school holidays I’d go with him to pick up the fresh bread and we’d always stop at a deli to get some mortadella and just … yum … eat it up.” She smiles at the memory.

Pork-and-fennel sausage roll at Pig and Pastry – $8
Far from Petersham’s main drag, Pig and Pastry sits at the suburb’s edge, between the palm-tree-shaded Petersham Park and Parramatta Road. The cafe is full of quaint touches: a long farmhouse table, mismatched antique teacups, and pretty pastries and doughnuts.

It can be tempting to have one of the elaborate doughnuts for lunch, but the pork-and-fennel sausage roll is best in class. The puff pastry is perfectly crisp and buttery, while the pork is juicy and well seasoned with hints of liquorice-y fennel. Take it with a side salad of mixed greens. 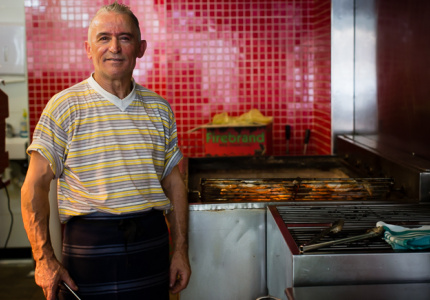