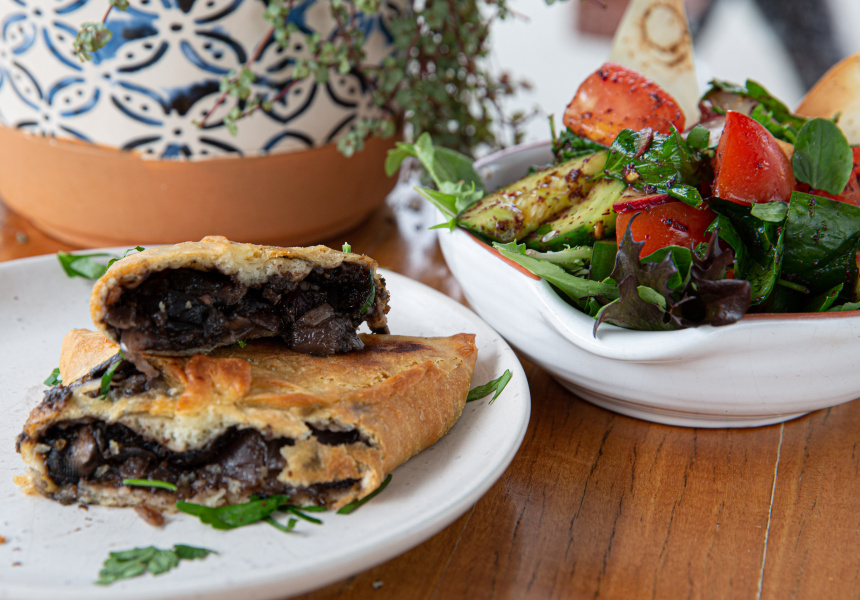 Chunky beef pie with pickled slaw at Miss Lilly’s – $11.50
South King Street is known as a vegan hub. But it’s not exclusively vegan – take Miss Lilly’s, an ace bakery on the main drag.

“We gently cook off onion, celery, thyme, then we add Coopers Dark Ale, add the beef stock to make a gravy and then cook the chunks of Cape Grim grass-fed beef for about four hours until it’s melt-in-your-mouth tender,” he tells Broadsheet.

Masters’s pies are inspired by his “hardcore English” grandma Miss Lilly, but the spelt pastry crusts are his own invention. “Spelt makes a really good pastry. Traditional pastry can be quite heavy and filling. People say that our pies are so light they could eat a couple.”

All pies are served with a coleslaw that’s pickled for two days.

“We want to create a space where everyone is welcome, no matter where in life’s journey you are. That’s why we don’t have set prices,” says Sophia Clifton, manager of the casual vegan diner.

There isn’t a formal, set menu either. Much of the produce is donated by organisations such as Foodbank or Addi Road Food Pantry, and the chefs design the menu around the surprises that arrive each day.

“We usually have a curry, and today we have a creamy-mushroom pasta because we got a lot of mushrooms from Foodbank,” says Clifton. “We often have a bean dish … one week it was nachos because we had heaps of corn chips donated.”

Clifton enjoys the challenge of dealing with the unknown. “I’m in the kitchen tomorrow night, and I have to create three dishes and a dessert. Right now I have no idea what I’m going to make.”

The suggested donation for a meal is $15, but Clifton says people are free to give as much or as little as they can manage.

“$15 covers the meal and our running costs. We really want to promote equality,” she says. “Some people are homeless, others are well off, and we’ve created a place where everyone can be together without stigma.”

The diner uses three types of tofu to approximate the chewy, tasty seafood that goes in a traditional combination laksa. “We do a fried one, a plain one and a twisted tofu, then we add vegan chicken and mix it with mushroom to add texture.”

For those who want more heat in their laksa, Ho is so confident in the flavour balance that she doesn’t recommend adding any chilli sauce or oil. “Fresh chilli, rather than chilli sauce, is better, otherwise it might change the flavour of the soup.”

Vegan chicken pie at Suzy Spoon’s Vegetarian Butcher – $10
Suzy Spoon is a pioneer in Sydney’s plant-based dining world. Since she opened her first vegetarian cafe in 1994, Spoon’s seen an increase in people adopting plant-based diets. “I think veganism is the ultimate evolution of people’s diets,” she says.

Her store on King Street is a good place to stop in for a vegan chicken pie to munch on as you window-shop at the few remaining vintage shops on the strip (she also has a wholesale factory in St Peters).

“We do three different pies, but my favourite is mushroom, leek and seitan,” she says.

The filling is cooked in a lovely miso gravy, then encased in a light, shortcrust base and topped with flaky puff pastry.

Owner Sarah Shaweesh says it’s not as difficult a task as one might think: “Our food has a lot of vegetable-based dishes. The meat is often something they add at the end. I don’t think there’s been a single dish I haven’t been able to veganise.”

That includes musakhan, Palestine’s national dish of chicken, onion and sumac on flatbread.

“It’s really commonly made at home. People top flatbread with onion and chicken and layer it up. Instead of chicken I use mushroom, and I’ve made it into a triangle pastry,” she says. “I use king brown, oyster and portobello mushrooms, but the focus of the dish is the sumac and caramelised onion.”

Choose between tabouli or fattoush salads on the side, or forgo salad and opt for a Nablus coffee with rosewater, oat milk and maple syrup.

Eggplant aburi sushi at Comeco – $14.50
Comeco Foods started out selling gluten-free and vegan doughnuts at markets around Sydney before opening a permanent shop in Newtown last year. Many customers, aware of co-owner Yu Ozone’s dairy and gluten allergies, would ask what she and husband Masa Haga ate at home. And so the couple realised customers also wanted vegan and gluten-free sushi.

The eggplant aburi riffs on unagi (grilled-eel sushi). Pumpkin tempura, onion ring, cucumber and carrot all go in the roll, along with tender, pan-fried eggplant. Gluten-free teriyaki sauce is drizzled on top and the roll is then toasted with a blowtorch.

“We always make sushi at home, and this is one of the family’s favourite dishes. So it made sense to develop the recipe for the cafe,” Ozone tells Broadsheet. 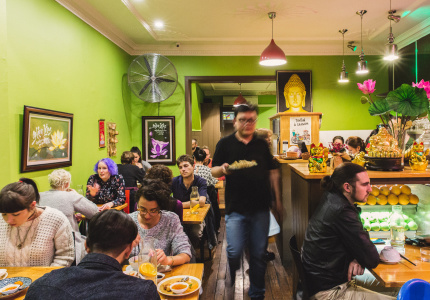