Cheap Eats in Circular Quay and The Rocks for $12 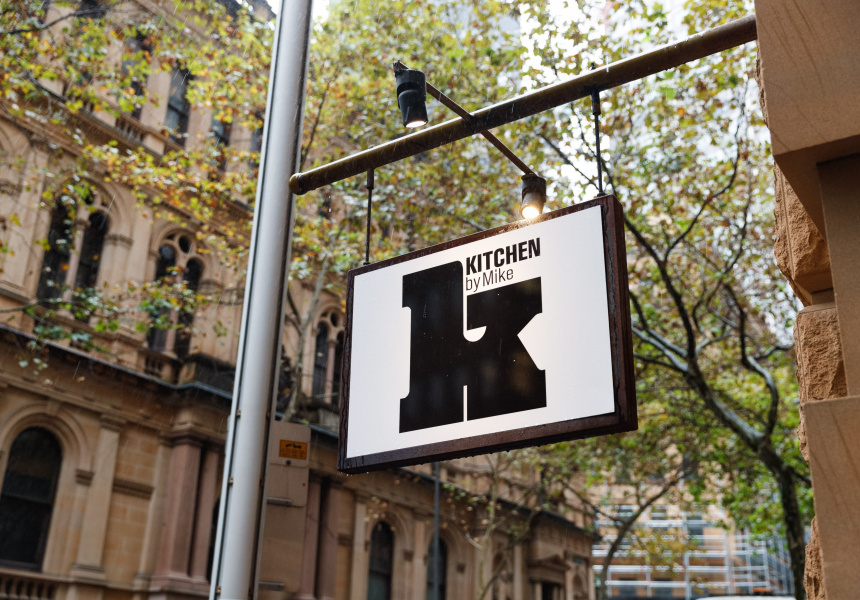 It might seem impossible to have views of the Opera House and the Harbour Bridge and get an affordable meal at the same time. But this tourist zone has plenty of eateries with not just a couple of cheap dishes, but entire menus built around affordable, delicious, seasonal food. Seize the day and make lunch plans now.

Salad or quiche at Kitchen by Mike – $12
Mike McEnearney’s canteen is a rarity in the city. Not because it has counter-style service – you can get that at food courts, although not with an affable, well-known chef carving your chicken and such pretty surrounds – but for its affordable good quality food.

“We get CEOs, bus drivers and students as customers and I love that,” he says. “I want to be there for everybody.”

McEnearney offers boundless possibility for a cheap lunch. “You could have two different salads for $12; or a quiche made with saffron and leeks, or bacon and cheese; or a piece of chicken breast with aioli and young roast carrots.”

Try not to get attached to any one dish, though – like at his original Rosebery spot (now closed), the menu changes as ingredients come into season. The only reliable thing is the house-made chicken liver pate from the venue’s No 1 Bent Street days. “We had a petition from customers never to take it off the menu,” he says.

And while taking food away will save you a couple of dollars, eating in doesn’t cost much more. “The sandwiches are $12 and we change them up every couple of days. We’ve had chicken marinated with apple and mint with pickles, carrot and brie, and roast lamb with grilled zucchini, feta and tzatziki.” Everything is made fresh in-house and Barbaro prides himself on the quality of the food and the place’s drive to go the extra mile. “Our food is good and cheap. We have excellent chefs and not a lot of people will do fried or poached eggs.”

Woodfired pizza at Alleyway – $12
Down the stairs from Avenue, in the large but hidden sandstone-lined courtyard, is the cafe’s sister venue: Alleyway. It’s just 26 square metres but the seating spilling out into the courtyard gives the small whisky bar dramatic scale.

Those who have discovered the largely unadvertised bar will know that its strength is whisky, gin and natural wines. But the food, made in Avenue’s kitchen upstairs, is excellent.

“For after-work drinks on a Wednesday, we do live music and $12 woodfired pizzas,” says Barbaro. There are three to choose from: a traditional margherita; a prosciutto, parmesan, rocket number finished with truffle oil; and one topped with salami and black olives.

Along with one of affable bartender Matty Johnson’s creative cocktails, the pizzas are a good salve for the mid-week blues.

Roast-chicken banh mi at the MCA Cafe – $12
A contemporary art museum with one of the most iconic views in the world might not be your first idea for a place to get an inexpensive meal, but the MCA Cafe is sneaky like that.

“Some people just assume a place is expensive because of where it is or how it looks, but price wise we’re quite reasonable,” says executive chef Keith Higginson about the sunny part-inside, part-rooftop cafe.

There are a number of good things on the menu for $12: the dip board, the cassava and manchego croquettes, and the bacon and egg roll with hickory barbeque sauce (there’s also a vintage-cheddar sandwich with tomato and whole grain aioli mustard for $9).

But it’s the roast-chicken banh mi with Vietnamese pickled vegetables and coriander that’s our pick. The roll is super crunchy and there’s the right balance of herbs and chilli to give you a little kick.

And sure, we know this is not the cheapest place in the city to get a Vietnamese sandwich, but we can’t think of another place that serves it and delivers killer views of the Harbour Bridge and Opera House.

Chilli Con Carne at The Fine Food Store – $12.50
The chilli con carne is a well-kept secret among office workers in The Rocks. “It’s a classic chilli con carne with ground beef, cooked for five or six hours,” says chef Detlef Haupt. “There’s no top secret to it. It’s full of flavour because it’s done the right way.”

The cafe has been trading in Australia’s oldest suburb for 15 years and the chilli – which includes kidney beans, garlic, cumin, onion and tomatoes – has endured. “It’s been on the menu for ages. I can’t take it off,” he says.

The Rocks might seem like a tourist trap, but Haupt says the area at the edge of corporate Sydney has a beautiful soul. “For everyone who works or lives here, The Rocks has a village feel. People love it. If a company moves offices somewhere else … they come back on the weekend because they miss it so much.”

Hand over $7 and you will get one of Michael Shafran’s very good boiled bagels (with sesame, poppy, onion, plain or “everything”) made like they do it in the Big Apple – boiled and baked so it’s got a good crust – and smeared with a generous serving of cream cheese. There’s even the current issue of the New Yorker to read while you dine.

The other option is to come with a friend. “We’ve got the Katz Me if You Can pastrami sandwich, which is a homage to Katz’s Deli in New York. We’ve got a custom-made proper brisket pastrami on house-made caraway rye.”

The regular sandwich is $16, or “if you really want it stacked up high, it’s $26 for the double XL.” Shafran says the sandwich is tall, but you can fit it in your mouth if you open wide.

Want some more cheap eating ideas? Here’s where to go in Wynyard and Town Hall. 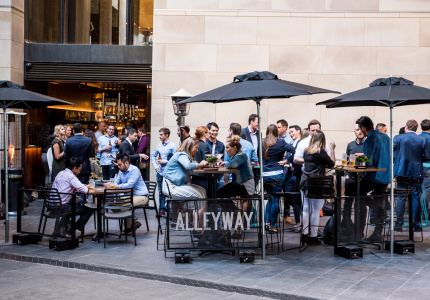 Corner of Mill and Kendall Lanes, The Rocks