One of Sydney’s oldest ramen joints, whole fish, and a $7 sandwich with San Daniele prosciutto. 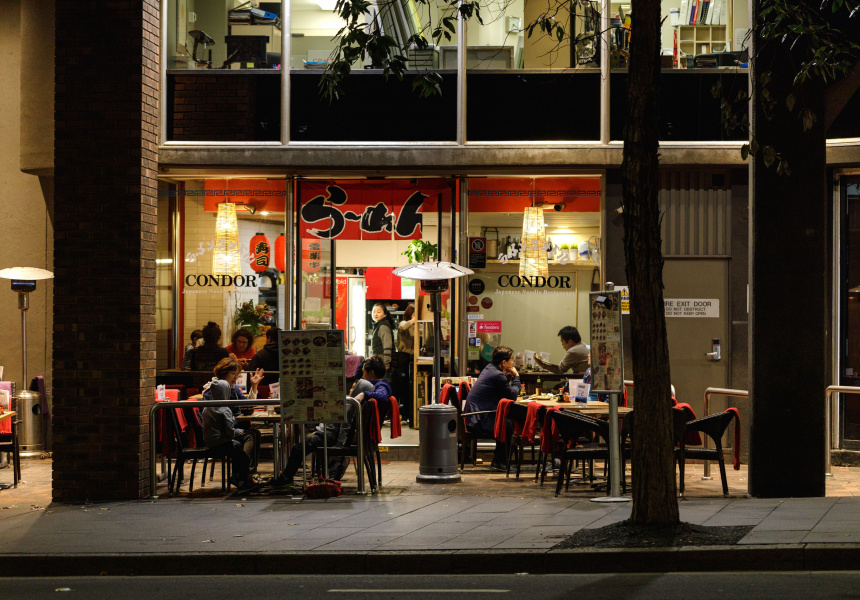 If Wynyard in 2018 had a slogan, it would be “under construction”. The station and surrounding streets once teemed with office workers having lunch at myriad eateries, but many underground and street-level spots have been uprooted as the inner-city area continues to be upgraded and the tram lines are laid down George Street.

In spite of the disruption, there’s still good, cheap food to be had, you just need to know where to look.

You don’t visit Malay Chinese Takeaway for the ambience. The ceilings are low, fluorescent lights cold and the service oscillates between friendly and lightning quick depending on the length of the queue. If you arrive after 12.15pm, be prepared to fight for a table or to ask a stranger if you can sit so close to them, your elbows occasionally bumping. But of course that’s all part of the charm of this busy spot, which has been operating for 31 years and, staff say, serving a laksa based on the same recipe the whole time.

The bean-curd version is a classic: creamy, salty and sweet with a hint of tartness. The deep-fried cubes of bean curd are porous so take care when eating as the liquid trapped in the tofu can be scalding hot.

To avoid splashes of red chilli oil on your clothes, splash out 50 cents for a bib, or you can employ this technique: grab a chopstick-ful of noodles and curl them into your spoon. Add a bit of soup, blow to cool and slurp carefully. Repeat until the enormous bowl is empty.

Scan the diners hunkered over their trays at Hunter Connection and you’ll see an overwhelming number scooping bright curries from divided silver platters. The food is from Franks ‘n’ Cumin, a tiny shop run almost singlehandedly by a man who likes to go only by the name Raj.

“In Malaysia, there are Malay people, Chinese and Indian, and the food is often mixed,” he says. That unity of cultures is reflected in a menu that serves pappadams and dahl lentils alongside beef rending and chicken sambal.

The vegetarian offering is also excellent, served with a heap of steaming basmati rice, which Raj claims is low GI, “so customers don’t fall asleep at their desks after such a big meal.”

Prosciutto and buffalo mozzarella panino at Will & Co – $7

Lunchtime at Will & Co’s tiny Merivale-owned outpost is surprisingly quiet considering how tasty the sandwiches are. “We’re an espresso bar,” says manager Mark Wilkie, “so I suppose people don’t see us as a lunch destination yet.”

The food offering is not to be underestimated though.

Made at the neighbouring Ash Street Cellar’s kitchen, sandwiches are fresh and simple. They change regularly but ingredients are typically Italian, such as ham with provolone and olive oil, or the standout prosciutto.

“My customers tell me I make the best pho in Sydney,” says Mya Tran, owner of Little Vietnamese Foods. When asked why she thinks they like it, she nods towards a customer and says, “Ask him.” He smiles. “I come here all the time. I think it’s the broth. I’ll walk 20 minutes of my lunch hour to get it,” he says, then returns to the steaming bowl of beef noodle soup.

Tran arrives early each morning to begin prepping for the day. “I don’t trust anyone else to cook,” she says.

It might not be a scalable model, but it’s one that works well: mid-lunch, the queue spills out the door.

When a Japanese firm won the contract to build the Harbour Bridge tunnel, the founders of Condor Japanese Restaurant opened one of Sydney’s first ramen shops to serve the engineers (construction began in 1988). The busy eatery might have changed hands, with Jun Zhang owning the business for nearly two decades, but little else has changed.

Everything is made in the restaurant’s tiny kitchen, including the base for Condor’s tasty ramen soup. “We do a pork and chicken base with bonito stock,” says Zhang. “We also make the chashu pork here.”

You’ll be hard pressed to find cheap eats at Condor other than the ramen, but it’s worth returning with a bigger budget to try the seafood miso udon hotpot with chilli sauce.