Charles Curnow’s Cult Burgers are Back 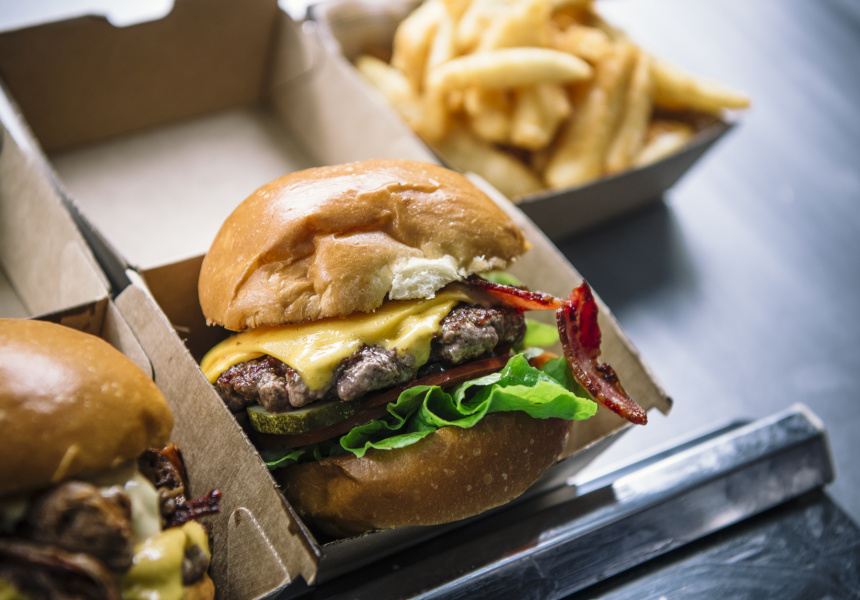 The “Madman” is back. After unexpectedly being booted from his restaurant in St Leonards, burger chef Charles Curnow is now on the road with Chef’s Kitchen, the truck version. “I had 30 days to get out. It was a little harsh but c’est la vie,” says Curnow. In the end though it was serendipitous. “I've wanted to do a food truck for 10 years but I never had the opportunity because we had the shop running.”

Despite his new kitchen being significantly less equipped, Curnow hasn’t compromised on anything. He’s still mincing his own meat, making all his own sauces and doing pretty much everything he can without baking his own bread and making his own cheese –he just does it at home now instead of a restaurant kitchen. “One of my friends came over and saw the commercial setup I have, she was like ‘OMG’. I got some mayo out for her to use and it was in a 15 kilo bucket.”

Fans of the original will be happy to hear Curnow’s two most famous creations aren’t going anywhere. For those who never tried Chef’s Kitchen when it was an unassuming highway-side burger stop, that’s the Meaty Ménage (a hearty mix of bacon, beef patty, gravy-soaked, 14-hour smoked brisket, American cheese and a twist on the MacDonald’s Big Mac sauce) and The Cali (a more classic cheeseburger amped up with bacon, caramelised onion and a tart mayo).

Curnow is known for a lot of experimentation (less of the gimmicky stack-it-all-together kind and more technique-based) and, in future weeks he’s hoping the truck can be a good platform to show it off. “Unlike other [burger] places that just do one special, I want to get to the point where I do a special menu for each event and location,” says Curnow.

Last week he was doing a bacon jam burger and fries with pork belly crisps on top. “I got some pork belly, sliced it into large chunks, spiced rubbed it, smoked it and glazed it with a barbeque sauce. Then on the day I toss it through a seasoned flour and make them crispy,” he says.

Chef’s Kitchen will be at Dad & Dave's Brewery in Brookvale from 5pm to 9pm on Friday 1 September, 2017. The burgers on the menu are the Cali, Meaty, Cheezy and Bandit. There’s also pulled-pork loaded fries.